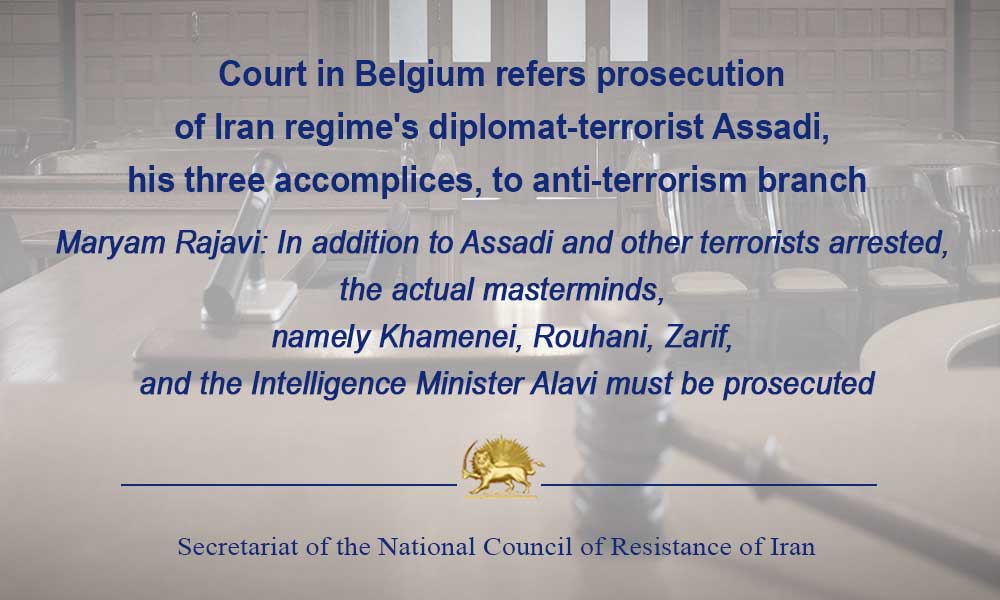 On Thursday, July 30, 2020, a court in Antwerp, Belgium held the second preliminary hearing on the case of Assadollah Assadi, the clerical regime’s terrorist diplomat, who, acting on orders of the Iranian regime’s most senior leadership, was in the process of carrying out the terrorist bombing of the major gathering of Iranians on June 30, 2018 in Villepinte, Paris. Along with Assadi, his three accomplices Amir Saadouni, Nasimeh Naami and Mehrdad Arefani will be tried.

The three-judge panel referred the case of the four jailed terrorists to the Antwerp Special Counter-Terrorism Branch. This marked the completion of the preliminary stages of the trial of Assadi and his accomplices, which the clerical regime had spared no effort to prevent from happening. The trial will begin on November 27, 2020.

This is the first time that a diplomat in Europe is being prosecuted for direct involvement in terrorism. The clerical regime, outraged by the mass transfer of the PMOI/MEK to Albania, terrified by the December 2017 uprising, and concerned about the growing international standing of the National Council of Resistance of Iran (NCRI) and its President-elect, Mrs. Maryam Rajavi, sought to assassinate her and some of the most prominent American and European officials in attendance in the Villepinte gathering.

Assadi is a veteran officer of the Ministry of Intelligence and Security (MOIS) and the station chief in Austria, which acts as the main base of the MOIS operations in Europe. Working under the guise of the third secretary, he personally handed over the powerful TATP explosives to Amir Saadouni and Nasimeh Naami in Luxembourg on June 28, 2018, to be used during the Villepinte gathering.

On instructions by the mullahs’ MOIS and directives by the Ministry of Foreign affairs, Assadi again refused to appear in today’s court and only Saadouni, Naami and Arefani were present. This was an attempt to downplay the dire political consequences of the trial.

Mrs. Maryam Rajavi, the President-elect of the National Council of Resistance of Iran (NCRI), testified for seven hours while presenting documents which made it clear that this major terrorist operation was decided during a session of the regime’s Supreme National Security Council headed by Hassan Rouhani and approved with the direct order of the regime’s Supreme Leader Ali Khamenei. Mrs. Rajavi stressed that in addition to Assadi and other terrorists arrested as perpetrators of this crime, the actual masterminds, namely Khamenei, Rouhani, Zarif, and the Intelligence Minister Mahmoud Alavi must be prosecuted. This was necessary to stop the mullahs’ unbridled terrorism, she said.

In her speech at the Free Iran Global Summit on Monday, July 20, 2020, Mrs. Rajavi referred to the 2018 terrorist plot, pursued by the regime to bomb the grand gathering of the Iranian resistance at Villepinte, Paris, as one of the two largest regime’s terrorist plots in Europe since coming to power four decades ago. She said, This shows that the regime views the Iranian Resistance and democratic alternative (NCRI) as the main threat to its survival for which reason it spares no crime to confront the Resistance; even using its officials to transfer the explosives.

Mrs. Rajavi emphasized on the need to close all embassies, and diplomatic missions of the regime which utilized for terrorist activities. The regime’s agents and operatives who function under the cover of commercial, cultural, or religious activities, or pretend to be journalists or opponents, refugees, or citizens, must be expelled from European countries, the NCRI President-elect added.

Secretariat of the National Council of Resistance of Iran (NCRI)
July 30, 2020