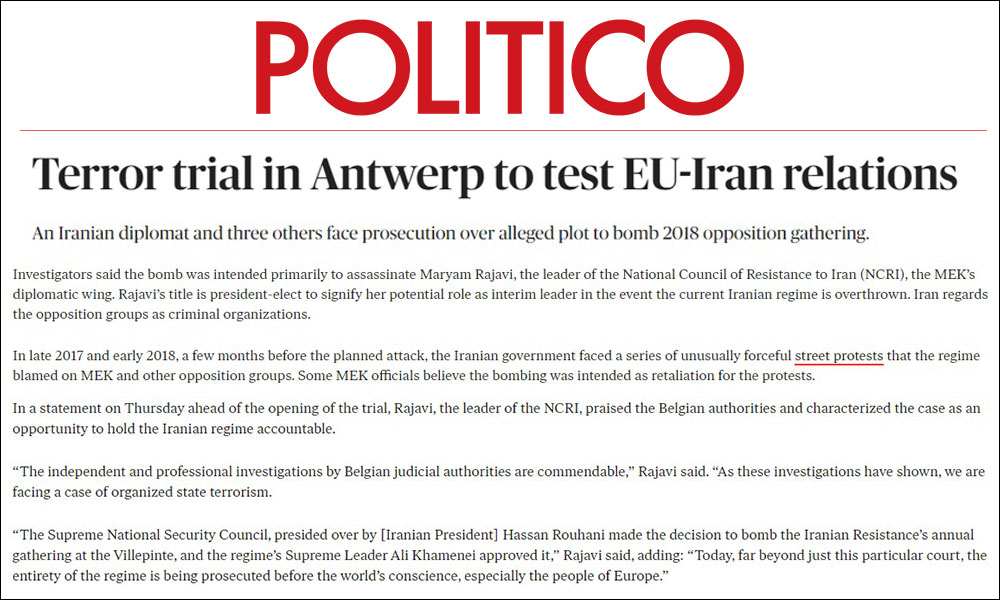 An Iranian diplomat and three others face prosecution over alleged plot to bomb 2018 opposition gathering.

The device was nicknamed “the Playstation” — but, according to Belgian prosecutors and intelligence officials, it was no game.

Allegedly handed off by a Vienna-based Iranian diplomat to an Iranian-Belgian couple at a Pizza Hut in Luxembourg in June 2018, it was a powerful bomb intended to attack a convention of thousands of opponents of the Iranian regime just outside Paris a few days later. A tip from Israeli intelligence to European authorities stopped the attack.

This Friday, the Iranian diplomat, the couple and a fourth alleged accomplice go on trial on terrorism charges in the Belgian city of Antwerp after two years in which law enforcement officials across Europe amassed reams of detailed evidence of the plot they say was authorized at the highest levels of government in Tehran.

The case will likely have grave ramifications for EU-Iran relations, renewing attention on Tehran’s record of state-sponsored terrorism just as European leaders were hoping a change in the U.S. administration might help revive the Iran nuclear agreement. The deal has been near collapse since President Donald Trump quit the accord less than two months before the planned attack in Villepinte, northwest of Paris.

The trial is also certain to raise troubling questions for Belgian authorities and other officials across Europe about numerous potential intelligence failures and security gaps, as well as possible loopholes in asylum policy.

The Iranian diplomat charged as mastermind of the plot, Asadollah Assadi, was allegedly an undercover intelligence operative who brought the explosive device to Vienna from Tehran in his baggage on an Austrian Airlines passenger flight before driving it to Luxembourg in a rented red Ford hatchback. Assadi was subsequently arrested at a gas station in Germany while driving back to Austria.

Meanwhile, the married couple intercepted on the edge of Brussels while allegedly on their way to France to carry out the attack — Amir Saadouni, 40, and his wife Nasimeh Naami, 36 — had each been granted political asylum in Belgium. But while they claimed to need protection from persecution by the Iranian regime, evidence shows that Saadouni and Naami made numerous trips back to Iran over the years — travel that apparently did not raise any red flags with the Belgian authorities.

One person with close knowledge of the case said Saadouni had made an initial asylum application in Sweden that was rejected. In a statement to investigators, Saadouni said he had lived in Belgium since 2003, married Naami in Iran in 2005 or 2006 and she had arrived in Belgium in 2007. Records show they obtained Belgian citizenship — Saadouni on July 27, 2016, and Naami on November 3, 2017.

Evidence compiled by the Belgian authorities indicates Assadi, whose title was third counselor at the embassy in Vienna, was allegedly an operative of the Iranian Ministry of Intelligence and Security (MOIS) and Saadouni and Naami were also MOIS agents who traveled several times to Tehran starting in 2010 for meetings and training — visits on which they did not see family.

Iran has denied any connection to the alleged bomb plot and shortly after the initial arrests, Iranian Foreign Minister Javad Zarif called the plot a “false flag” operation.

Assadi’s Belgian lawyer, Dimitri de Béco, has said his client was protected by diplomatic immunity and should not have been arrested. But the head of Belgium’s State Security Service, Jaak Raes, said intelligence officials had determined the planned bombing was a state-sanctioned operation, approved in Tehran.

“The plan to attack was conceived on behalf of Iran and under its leadership,” Raes wrote in a letter to law enforcement officials, including the Belgian federal prosecutor, Frédéric Van Leeuw. “It was not a personal initiative of Assadi.”

The target of the plot was an annual convention of the Mujahedin-e-Khalq or People’s Mojahedin Organization of Iran (MEK), the foremost opposition group to the Iranian government and its supreme leader, Ali Khamenei. MEK has previously been listed as a terrorist organization by the EU and others (a designation that was lifted by the EU in 2009.) It is regarded by some as a Marxist-Islamist cult.

Investigators said the bomb was intended primarily to assassinate Maryam Rajavi, the leader of the National Council of Resistance to Iran (NCRI), the MEK’s diplomatic wing. Rajavi’s title is president-elect to signify her potential role as interim leader in the event the current Iranian regime is overthrown. Iran regards the opposition groups as criminal organizations.

In late 2017 and early 2018, a few months before the planned attack, the Iranian government faced a series of unusually forceful street protests that the regime blamed on MEK and other opposition groups. Some MEK officials believe the bombing was intended as retaliation for the protests.

Others say Iran had numerous reasons for a potential strike, including the U.S. withdrawal from the nuclear deal. In October 2018, the Danish government accused Iran of plotting an assassination on its soil.

Saadouni, the alleged bomber, was reportedly a member of the MEK, possibly having joined in order to apply for asylum in the West. According to Belgian investigators, he was later recruited by the Iranian government and potentially pressured into spying on the opposition group. Saadouni and Naami have admitted their relationship to Assadi, whom they knew by the codename Daniel. But the couple has denied knowing the device they were given — made up of a detonator and half a kilogram of the explosive TATP — was a bomb.

In a statement on Thursday ahead of the opening of the trial, Rajavi, the leader of the NCRI, praised the Belgian authorities and characterized the case as an opportunity to hold the Iranian regime accountable.

“The independent and professional investigations by Belgian judicial authorities are commendable,” Rajavi said. “As these investigations have shown, we are facing a case of organized state terrorism.

“The Supreme National Security Council, presided over by [Iranian President] Hassan Rouhani made the decision to bomb the Iranian Resistance’s annual gathering at the Villepinte, and the regime’s Supreme Leader Ali Khamenei approved it,” Rajavi said, adding: “Today, far beyond just this particular court, the entirety of the regime is being prosecuted before the world’s conscience, especially the people of Europe.”

Acting on the tip from the Israelis, Belgian intelligence officers watched as the explosive device was passed off in the Pizza Hut in Luxembourg, wrapped in plastic, and placed in a toiletry kit inside Naami’s handbag. A remote detonator was also found in her bag.

The couple were intercepted in Woluwe-Saint-Pierre, just near the border of Brussels and Flanders, as they drove a gray Mercedes heading from their home in Wilrijk, outside of Antwerp, to the convention. As a bomb squad tried to defuse the device, it partially detonated, destroying a police robot.

After being arrested at the gas station in Bavaria and extradited to Belgium, Assadi reportedly threatened investigators during one of his interrogations, insisting that armed groups supporting Iran would retaliate if he was convicted in the case.

The fourth suspect, Mehrdad Arefani, a resident of Brussels, was arrested in Villepinte, where the conference took place. An investigation by French authorities also determined the Iranian government was behind the planned attack.

In response, France announced it had frozen some assets belonging to Assadi and another Iranian allegedly connected to the plot, Saeid Hashemi Moghadam. But French President Emmanuel Macron has continued to try to engage with the Iranians, including by inviting Zarif to a meeting during the 2019 G7 leaders’ summit that France hosted in Biarritz.

Critics of the Iranian regime say France’s meek response to the planned attack, which could have resulted in mass casualties on French soil, was evidence of the EU’s generally feckless approach toward the theocracy in Tehran.