Maryam Rajavi: We urge Britain and Europe to stand on the side of the people of Iran for regime change 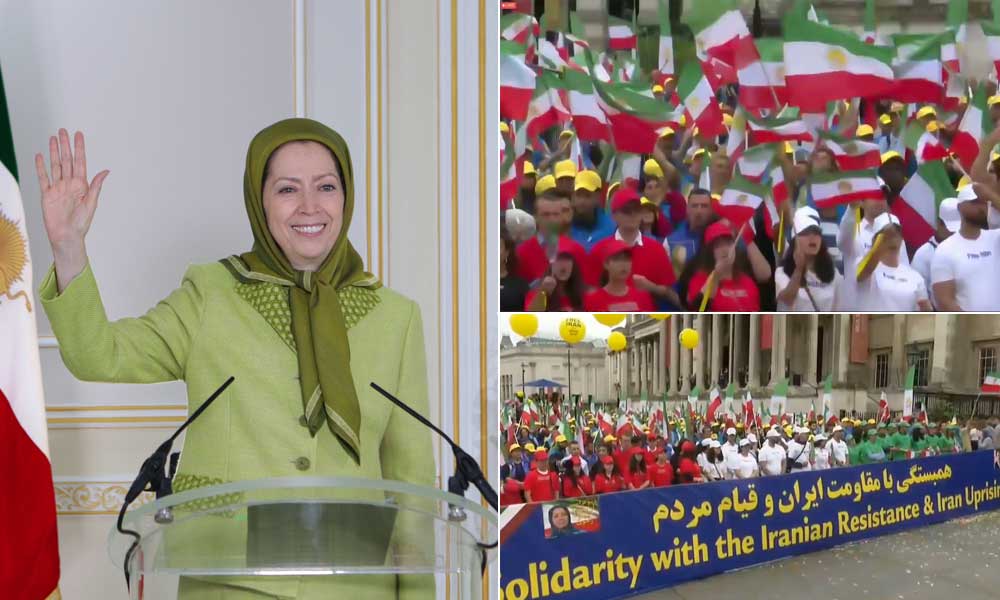 Fellow compatriots,
Friends and supporters of the Iranian Resistance who cry out the desire of the people of Iran to overthrow the regime and achieve freedom.
Distinguished lawmakers, human rights advocates and prominent political personalities in Britain who have found the genuine solution to the issue of Iran in Resistance for freedom and democracy,
I would like to salute you all.
I would also like to pay tribute to the brilliant conscientious individuals from among the people of Britain and their contemporary history whose names will remain eternal, including Lord Corbett, Lord Slynn and Lord Russell –Johnston who lent their unsparing support to the Iranian Resistance over the past four decades.

Also Lord Archer, Lord Waddington, Lord Renton, Lord Avebury, Lord King, Lord Fraser, Baroness Turner and Baroness Gibson. And Rudi Vis, Jim Dobbin, David Vaughan and Elizabeth Sidney whom we never forget.
Robin Corbett was the noble conscience of the British people and parliament who defied the policies of his government and party to revoke the unjust proscription of the PMOI.
Lord Slynn was a radiant beacon of justice, an epitome of defying the darkness of oppression and injustice, advocating the rights of the victims and the oppressed who were falsely accused in the political wheeling and dealings, which he said was what he hated the most.
Our deepest and greatest tributes to all these unforgettable friends of the Iranian people and Resistance.

Fellow countrymen and women,
Your demonstration today in London, marks the peak of a series of Free Iran rallies taken place over the past one-and-a-half months in Brussels, Washington, D.C., Berlin, and Stockholm.
It is also an extension of the Iranian Resistance’s 5-day annual gatherings, two weeks ago, at Asharf-3.

The clerical regime has again unleashed another barrage of fake and misleading news against the Iranian Resistance through a fake twitter account presumably belonging to a French Consul General. The Foreign Ministry of France issued an official statement denying the news, and Twitter also shut down the regime’s fake account.

The mullahs’ regime has reiterated time and again that speaking out, even against Khamenei, is not a red line and will be tolerated. But as was the case when political prisoners were massacred in 1988, PMOI/MEK is a forbidden name and a red line.
This is the identity, path and tradition which terrifies the religious dictatorship even inside the regime’s jails and torture chambers. Khomeini issued a fatwa ordering the massacre of anyone who remained loyal to the name and ideals of the PMOI. But the victims cried out Massoud Rajavi’s name even at the gallows.
Hossein Ali Montazeri, Khomeini’s heir at the time, said the PMOI cannot be eliminated through killing, but will further spread.

Today, we see that the PMOI is spread in Iran by the expansion of resistance units and 1,000 Ashrafs.
The message of the people of Iran and supporters of Ashraf is the same everywhere: freedom and a free Iran. The mullahs must go. Regime change and regime change… And we do not get tired of repeating and insisting on these calls. We will cry out and repeat them again and again until the day they are realized. And of course, they would be certainly realized with your support.
Why and for what reason? As Massoud Rajavi said, because of remaining loyal to our pledges and making endless sacrifice in Iran’s history.
A glance over the list of execution victims, particularly the list of the victims of the 1988 massacre, reveals the truth of this statement.
Our people, our Resistance and the Mojahedin of Ashraf, have proven that they are prepared and ready to pay the price of freedom.

Let us take a look at the events which took place years ago on this day and on upcoming days, and the price paid for each of them.
The attack on Ashraf on July 28 and 29, 2009, simultaneous with the uprisings in Iran, where 13 Ashraf residents were killed and more than 500 wounded.
And the great patriotic epical operation in 1988 called the Eternal Light.
We salute and pay tribute to the martyrs, the heroes and heroines, and the freedom fighters of the National Liberation Army.

When Iran was burning in the fire of Khomeini’s unpatriotic war, the Army of Peace and Freedom rose up and poured the poison chalice of the ceasefire down Khomeini’s throat. The price was some 2,000 martyrs from among the most valiant children of Iran who gave their lives in the battles of the Liberation Army. This is something that we are proud of.
Also the Iranian Resistance’s incessant revelations of the mullahs’ bomb-making program and confronting their warmongering in the region.
Our Resistance has proven that peace and freedom can only be earned through fighting the mullahs’ religious dictatorship. This is in diametric opposition to the proponents of appeasement who defend the regime under the guise of peace.
Recently, the mullahs welcomed publication of a book by Jack Straw, one of the proponents of the policy of appeasement. He has projected firmness against the mullahs’ religious fascism, as a prelude to full-fledged war.

It is easy to guess that if it was the time of Hitler, how far he would go, as Winston Churchill said, to feed the crocodile.
It is not a coincident that he was among the sponsors of the terrorist designation of the PMOI as well as their bombing and slaughter in 2003. Khatami and Kharrazi said he was the man who said it was acceptable to demand the extradition of PMOI members and hanging of at least 20 of their leaders. According to the Daily Telegraph, to curry favor with the mullahs, he had the list of the 12 Shiite Imams in his pocket when he visited Tehran. And when the name of the Prophet of Islam was mentioned anywhere, he sent him the Muslim greetings.

These gentlemen’s hollow calls for peace are tantamount to safeguarding the regime against the Iranian people’s desire and against human rights.
Genuine calls for peace, however, can be realized only by peace and human rights. Its prerequisite is the overthrow of the ogre of war and oppression, i.e. the Velayat-e faqih dictatorship.
Really, are the mullahs and IRGC’s attacks on shipping in the Persian Gulf, jeopardizing regional and international security, in any way related to the policy of appeasement, the clampdown on the PMOI, and overlooking the violations of human rights in Iran in the nuclear deal? Didn’t concessions to the mullahs from the account of the Iranian people and Resistance further embolden the mullahs?
How did the proscription of the PMOI, disarming the Liberation Army, and bombardments of their basecamps in those years, with UK’s assistance, change the balance of power on the ground and in whose interest? Did they benefit peace and security or worked against them? Indeed, has the clerical regime given up on its hostage taking of European and American citizens and nationals?
Why has the regime increased the level of uranium enrichment and why has it added to the range of its ballistic missiles?
Which regime benefits and for what purpose from demonization of the PMOI and the Iranian Resistance?
Indeed, what happened to the moderate and reformed mullahs you encouraged and advocated for four decades? What happened to so much propaganda and investment on charlatans such as Mohammmad Khatami? Didn’t the people of Iran put an end to the political theatrics of fundamentalists vs. reformists by their uprisings?
Why do some people in Britain continue to subscribe to and relay the fake news and propaganda of the religious fascism in Iran?

Isn’t it shameful to let mullah Khatami brazenly claim in the Guardian that he had spent all his life on dialogue among nations and civilizations, and on peace, democracy and human rights. This impostor mullah ordered the Iranian press not to mention even one word about the massacre of political prisoners. He also gave free rein to the IRGC to do whatever they wanted to the students involved in the 1999 uprising and advised them just to wear plain clothes.

Khatami who claims to be promoting civilization, culture and peace, is the one who zealously supported the regime’s export of fundamentalism and was Khomeini’s propaganda minister in the eight-year war when according to the regime’s Education Minister 450,000 high school students were sent to the warfronts to run over the mine fields.

Shame on the anti-human mullahs and their proponents. They are at war with the people of Iran but impudently call for a peace coalition, of course to preserve the regime’s rule.
Six months ago, Mr. Tony Blair wrote in the Washington Post, “Hopes that this would lead the Tehran regime to moderate its behavior have proved misplaced.” He wrote that they had intensified their malign policies around the region, in Syria, in Lebanon, in Iraq, in Yemen, in the Persian Gulf, and in the Palestinian territories…

And then he concluded that 40 years of disappointment should make us clear-eyed. because the regime has turned into the “single biggest destabilizing force in the Middle East.”
Yes, the policy of giving manoeuvring room to the mullahs has been and continues to be totally disappointing and a disaster, and it will continue to be so. This policy is not only against the people of Iran, but against regional and global peace and security.
The Iranian Resistance has paid the heaviest price and has always reiterated that the mullahs understand no language except the language of force and firmness.

We urge Britain, Europe and all governments to halt giving concessions to the mullahs. Do not help them decrease the sanctions. Stand up to them. Place the Revolutionary Guard Corps (IRGC) and the mullahs’ Gestapo (MOIS), Khamenei’s office and Hassan Rouhani on the terror list.
We urge you to set aside the policy of overlooking the main force in Iranian society and history. Instead of complicity and shaking hands with the religious fascism, stand on the side of the people of Iran for regime change.
Then as Tony Blair wrote, “we will be astonished at how the challenge of extremism in the Middle East and beyond abates.”

I specifically urge the new UK government to support human rights, namely the suppressed human rights of the people of Iran. I urge them to take action to send an international fact-finding mission to Iran to visit the regime’s prisons and the political prisoners particularly, the women.
Baroness Boothroyd, former speaker of the House of Commons, once said that the massacre of political prisoners in Iran, which took place after Khomeini was forced to accept the ceasefire in the (Iran-Iraq) war, has been the greatest crime against humanity since the Second World War. She said this crime remains unaccounted for but there will come a day when we would witness the truth get rectified.

My fellow compatriots,
The ruling regime is surrounded by an impatient nation confident that her liberation will not be realized unless the mullahs are overthrown. The clerical regime has no more strength or resources and is struggling in a quagmire which will lead to its overthrow.
The era of religious fascism is coming to an end; Iran will be free. We will take back our most beautiful homeland by the resistance units and the Army of Freedom.
Hail to all of you.