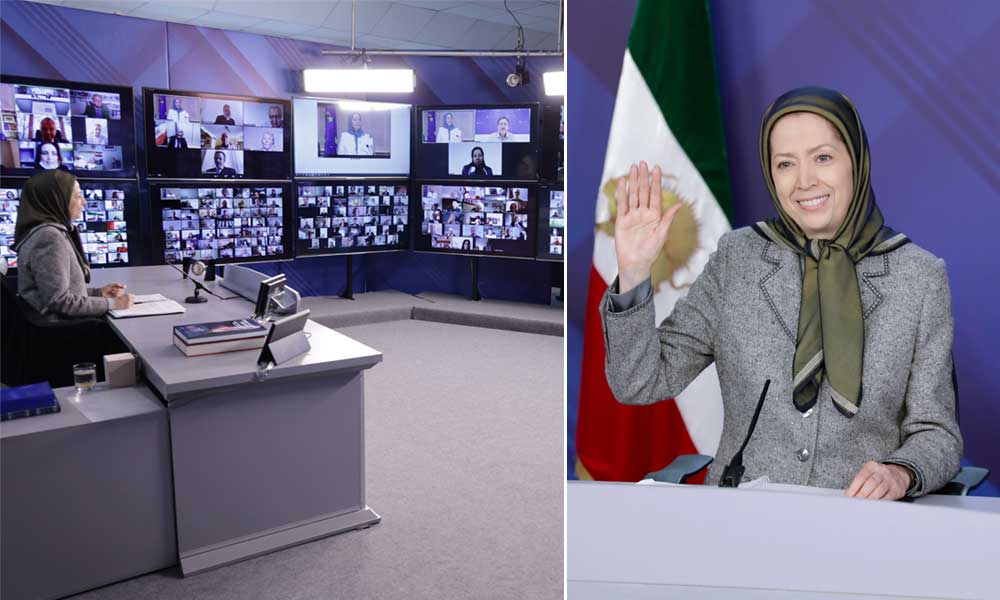 Maryam Rajavi: Support the struggle and uprisings with fervor and enthusiasm

Honorable representatives,
I thank you for having this opportunity to speak to you.
I appreciate your continued attention to the plight of the people of Iran and their desire for freedom against the religious dictatorship.

This regime is facing the anger and discontent of the vast majority of the Iranian people.
In addition to thousands of large and small protests, five major uprisings have erupted in Iran since January 2018.
Truck drivers, teachers, nurses, college students, factory workers and oil workers, time and again, rose up and cried out their protest.

The Resistance Units and courageous youth, through their activities, have had a great impact on shattering the atmosphere of fear and terror. They are paving the way for further protests and uprisings.

Distinguished parliamentarians,
The mullahs’ inhuman policies are surprising for some people. Why do they execute a young national champion, Navid Afkari, despite global and domestic protests?
Why do they target airports, oil installations and oil tankers?
And why don’t they give up their nuclear and missile programs, or their criminal wars in the Middle East?

No more illusions are left, today, about the regime moderating or changing its behavior.
Years ago, the European Troika experienced human rights dialogue, critical dialogue, and constructive engagement with this regime. The outcome of each of these policies was just disastrous.

The JCPOA also led to nothing but reinforcement of the IRGC, further suppression of the people of Iran, more warmongering in Syria, Iraq, and Yemen, and more terrorism in Europe and other countries.

It got to a point where three years after the nuclear deal and lifting of the sanctions, a so-called diplomat of the regime carried a bomb with him in Europe. Then, he personally handed it over to his agents to blow up the annual gathering of the Iranian Resistance in Paris.

Before that, he had personally travelled to Paris in June 2017 to gather information on the relevant places to carry out the horrific plan the following year. To coordinate with the officials in Iran, he travelled there at least six times in the first half of 2018. Today, he is imprisoned in Belgium and his trial is going to be held next month.
What was supposed to take place was a great crime against humanity and one of the greatest terrorist disasters in Europe.

In my testimony to the investigation, I presented the documents, emphasizing that this criminal plan had been prepared in the regime’s Supreme Security Council headed by Hassan Rouhani and carried out on the orders of Ali Khamenei. Therefore, Khamenei, Rouhani, Zarif, and Alavi, the regime’s Intelligence Minister, must face justice.

The big question, however, is this: Why has the regime become so emboldened to engage one of their diplomats directly in a terrorist operation?
One reason is that the regime is desperate in the face of the Iranian people’s protests and the significant role of the Iranian Resistance in the uprisings.

But another reason is that the regime was confident that it would not pay any price for committing such major terrorist crime in the heart of Europe, due to the ongoing policy of appeasement.
Indeed, how could the EU turn a blind eye on the regime’s agents and spies who are on the move on European soil?
European intelligence services have repeatedly reported that the regime’s embassies are centers of espionage and operations against dissidents, especially the PMOI.

What must be done?

Opposition to the extension of the arms embargo against the regime, inaction vis-à-vis human rights abuses in Iran, indifference towards constant movement of the Intelligence Ministry and Qods Force agents in Europe, and giving them free hand to do business are all against the interests of the people of Iran and against global peace and security.
The developments of the past year have shown that the people of Iran are ready to overthrow the clerical regime and establish a pluralist republic based on separation of religion and state and gender equality, abolition of the death penalty respect for the rights of ethnic groups, and a non-nuclear Iran.

In such circumstances, the security of Europe, its long-term economic interests and its relations with the Middle East, depend on its decision to stand by the people of Iran, and not by the mullahs.

I urge the Parliament of Europe to urge the Council of Ministers to adopt a binding legislation, to expel the Iranian regime’s agents from the European soil, shut down the regime’s embassies in all EU member states, and designate the IRGC and its proxies in Iraq, Syria, Lebanon, Yemen, and other countries as terrorist groups.

Thank you very much