Maryam Rajavi: EU faces a historic test vs. terrorism under the banner of Islam 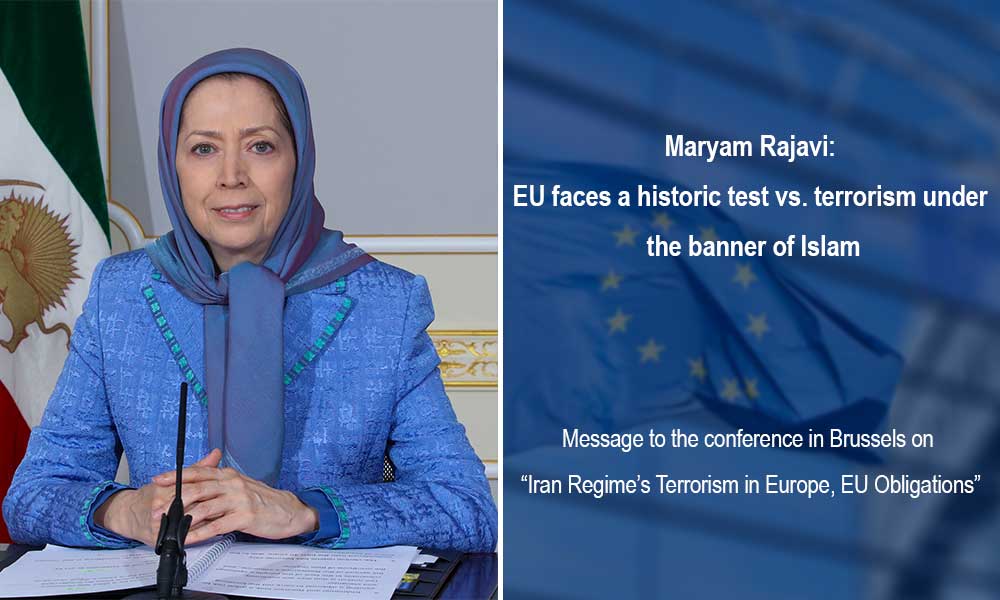 Message to the conference in Brussels on “Iran Regime’s Terrorism in Europe, EU Obligations”

Good afternoon, I am delighted to be able to join this timely conference.
Today, we are dealing with a unique case.
For the first time, a so-called diplomat carrying a bomb with him is being prosecuted in Europe.
As usual, the religious fascism ruling Iran tried hard to put the blame on the victims, meaning the Iranian Resistance.
When the regime terrorists assassinated Dr. Kazem Rajavi in Geneva, they first tried to put the blame on us, pretending this was a suspicious murder and a purge within the PMOI.

On July second 2018, while a diplomat-terrorist of the regime carrying a bomb had been arrested, the mullahs’ foreign minister commented about the bombing plot at Villepinte saying that this was a “false flag operation” on the verge of the regime’s President’s visit to Austria.
In February 2019, at a conference in Munich, Zarif said: “It could be a false flag operation.

It could have been an entrapment. It could have been a rogue operation.”
The mullahs’ foreign minister had forgotten that he had denied any arbitrary action in the religious tyranny during his remarks on the fifth of November 2018 at the regime’s parliament.

While defending the nuclear deal, Zarif told his adversaries, “We are not an institution to act by ourselves. Is it possible to do something in this country without reporting?”
In my seven-hour testimony during the investigation, I provided details of the decision-making and the enabling process of this operation.

I stress again that the decision for this operation had been made by Khamenei, Rouhani, Zarif, Alavi, the regime’s intelligence minister, and implemented only afterwards.
This is not something new for us.

In April 1997, the court of Berlin ruled on the assassinations in Mikonos restaurant, condemning Khamenei, as well as the regime’s then President, foreign minister and minister of intelligence.
I leave a discussion of the legal aspects of the case to the distinguished and competent lawyers.

But I want to make a few points here.
1. European countries must set aside all political considerations in this case. The regime’s leaders must be prosecuted and they must face justice.
This is a necessary and a preventive measure against terrorism under the name of Islam with the clerical regime as its exporter and central banker.

2. Khamenei and Rouhani took a great risk by sending a diplomat to carry out the bombing and slaughter.
The reason is that they are extremely vulnerable in the face of the people’s uprisings, the spread of the Resistance’s influence, and the overthrow of their regime.

3. The policy of appeasement has greatly emboldened the regime over the past 40 years.
To the extent that their diplomat, who is arrested, makes threats of more terrorist operations if convicted, even from inside prison.

Today, the European Union is facing a serious and historic test in the face of terrorism under the banner of Islam.
So, what is the EU going to do with the epicenter of terrorism?

• The entire Ministry of Intelligence and the IRGC must be designated as terrorist entities.
• Agents of the Intelligence Ministry and the Quds Force must be prosecuted, brought to justice, and expelled.
• The regime’s embassies and their so-called religious and cultural centers must be shut down.

These are indispensable to ensure the security of Europe, and especially the security of Iranian refugees and dissidents. This will bring about the friendship and support of the Iranian people.