Maryam Rajavi in the European Parliament: On Human Rights Day, Iran has once again been covered in blood 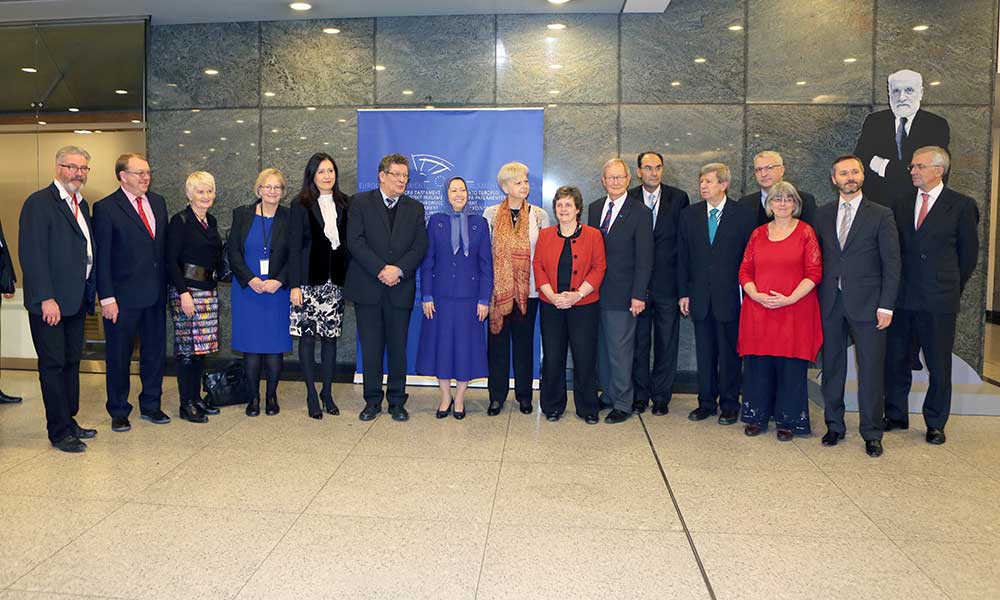 I am delighted to be with you here today.
I thank the Friends of a Free Iran Committee in the European Parliament for organizing this conference.
On December 10, the 66th anniversary of the adoption of the Universal Declaration of Human Rights, I pay respect to the heroes and heroines who made the ultimate sacrifice in the campaign to safeguard this ideal.

It is ironic and disturbing that on Human Rights Day, Iran has once again been covered in blood. In the past two weeks alone, the mullahs have executed 50 more people.

In Orumieh Prison, dozens of tortured victims are on the twentieth day of their hunger strike.
Thousands are currently on death row.

Dozens of ill political prisoners are being denied access to medicine and medical treatment and are essentially being killed gradually.
In view of this situation, I would like to ask EU governments a simple question: How can sustained relations with this barbaric regime be deemed remotely legitimate?
Has anything changed under Rouhani? The UN Secretary General and the Special Rapporteur on the situation of human rights in Iran say NO. Nothing has changed.

The reality is far worse. Human rights in Iran are non-existent. This regime has erected the pillars of its rule on the blood of 120,000 executed political prisoners. Thirty thousand of them were executed in 1988 in the span of a few months based on Khomeini’s fatwa.

The mullahs’ constitution, penal code, civil code, and laws adopted by its parliament are all based on the violation of human rights. Look at the events of the past year:

• In April, the regime’s security forces launched a bloody attack on Evin Prison, where political prisoners are held;
• In October, the authorities organized a wave of acid attacks on women in Isfahan and other cities under the pretext of combating mal-veiling. Doctors have said that some of these victims must undergo as many as 50 surgeries.
• In November, Bassij militias stabbed and injured a number of women in the town of Jahrom.

These attacks were coordinated after speeches and orders delivered by the regime’s authorities and Khamenei’s representatives.

New legislation ratified by the regime’s parliament indemnifies those who carry out such attacks.

Since Rouhani became president, at least 1,200 people have been executed, including at least eight juveniles.

At the same time, the suppression of ethnic minorities, such as Arabs, Baluchis and Kurds, as well as the arrests of Sunnis, Dervishes, Christians and Baha’is have been intensified.

Nevertheless, Rouhani’s apologists in the West praise him as a “moderate.”

The number of executions during the first year of Rouhani’s presidency has been unprecedented in the last 25 years. Over this time, we have not seen so many opposition members being massacred or taken hostage. And, we have not seen such a large number of Iranian women being targeted by criminals.

On April 19th, Rouhani said, “When someone is sentenced to death, it is either in accordance with the will of God or based on laws passed by Parliament. We are only implementing it.”

In October, 26-year-old Reyhaneh Jabbari was hanged after spending seven years in prison, charged with defending herself against rape. Despite widespread opposition in Iran and calls by human rights organizations for her release, Rouhani’s government, through its intelligence ministry, actively worked to proceed with the execution.

Indeed, this is the meaning of moderation under Rouhani, a notion that some Western governments defend in order to justify their illegitimate relations with the clerical regime.
This regime does not have the slightest capacity to reform itself.

Western governments have sacrificed human rights in order to foster relations with the religious dictatorship.

Look at the bitter outcomes of the European delegations’ visits to Tehran in the past year.
The mullahs used each and every one of them to increase the pace of executions.

Nuclear negotiations with the mullahs over the past year have continued in conjunction with the rising number of executions in Iran.

In order to avoid jeopardizing the talks, Europe and the United States not only remained silent vis-à-vis the human rights tragedy in Iran, they also offered more unjustified concessions to the regime.

Despite all these, the negotiations failed, leaving the world in fear of a barbaric fundamentalist regime attempting to develop a nuclear bomb.

But for the regime, the extension of nuclear talks was a major defeat and a sign of reaching an impasse.

This regime is incapable of accepting a deal that would guarantee the abandonment of the path toward developing nuclear weapons. It has reached an impasse.

It seeks the lifting of international sanctions while also fearing the consequences of abandoning its means for survival.

In addition, the theocracy is consumed by a vicious power struggle at the top.

More importantly, Iranian society is deeply disgruntled and is on the verge of another uprising.

Three days ago, on the anniversary of Student’s Day (December 7) in Iran, despite severe security measures imposed by the mullahs’ brutal forces, student protestors at various universities defied the ruling dictatorship by chanting, “Political prisoners must be freed.”

Therefore, now is the time to intensify pressures on the regime. The mullahs agreed to negotiate as a result of mounting pressure. But they refused to sign an agreement when they obtained concessions.

The only option is to apply greater pressure and institute more sanctions.

The Leader of the Iranian Resistance, Massoud Rajavi, once referred to this and said:
“Through enriched uranium, the mullahs want to cover up the inherent weakness of a regime that has reached the end. But, prior to obtaining so-called nuclear energy, is it not the Iranian people’s inalienable right to obtain freedom, sovereignty, jobs, food and shelter?”

Today, crimes committed by the fundamentalist forces in Syria and Iraq have enraged the global community.

Western governments have formed an international coalition to confront them. But why are they not standing up to the Iranian regime, which is the godfather of ISIS?

Hasn’t this regime committed greater atrocities over the past 35 years?

So, how could European governments justify their silence vis-à-vis the regime’s suppression?

More regrettable is the fact that the regime’s foreign lobby has been encouraged to promote collaboration with Tehran in the fight against ISIS.

This is not a solution, but a recipe for disaster.

On Human Rights Day, I also want to draw the attention of the European Parliament to the continuing siege of Iranian dissidents at Camp Liberty, Iraq.

More than anything else, the mullahs have used their machinery of suppression and terror against the resistance movement.

On September 1, 2013, Maliki’s forces carried out a massacre at Camp Ashraf at the behest of Khamenei.

52 residents were shot in the head with their hands tied behind their backs and seven, including six women, were taken hostage.

On December 26, 2013, Camp Liberty was attacked by missiles for the fourth time in one year.

The Iraqi government has laid a siege on the residents of Ashraf and Liberty for the past six years.

They have imposed a ban on commute and on visits from even the residents’ lawyers.

They have also imposed an inhumane medical siege, which has so far led to the deaths of 22 residents.

And recently at the behest of the Islamic Revolutionary Guard Corps (IRGC), Iraqi forces once again started psychological torture against the residents through the use of powerful loudspeakers.

The same torture methods were used against the residents in 2011 and 2012 using 320 loudspeakers installed around Camp Ashraf.

Therefore, I urge the EU to ask the Iraqi government to respect the rights of Camp Liberty residents and to change its policies and adopt a firm stance toward the brutal theocracy ruling Iran.

With new officials at the helm of the European Union, the European Commission and the Common Foreign Affairs Policy, there are hopes that a new initiative for defending human rights in Iran can be taken.

That new approach should include the following measures:

• Political and commercial ties with the Iranian regime must be contingent upon improvement of human rights, especially a halt in executions and torture;
• Those responsible for these crimes, namely the regime’s leaders, must face justice;
• The Iranian regime must be compelled to fully implement UN Security Council resolutions, halt uranium enrichment and accept snap international inspections of all suspect sites and centers; and
• The siege on Camp Liberty, especially the medical blockade, must be lifted and Liberty’s file must be handed over to institutions that have no ties to the Iranian regime.

The fulfillment of these demands would not only benefit the people of Iran and the region, but it is also crucial for global peace and security.

The PMOI/MEK and the Iranian Resistance are the only solution and alternative to terrorism and fundamentalism both in Tehran and in the region.

Terrorist groups such as Hezbollah and ISIS are the byproducts of the fundamentalism that emanates from Tehran. The Iranian Resistance seeks separation of religion and state, gender equality, freedom and democracy for the Iranian people and the people of the region.