Maryam Rajavi: For freedom, from Mosaddegh to January 2018 Uprising 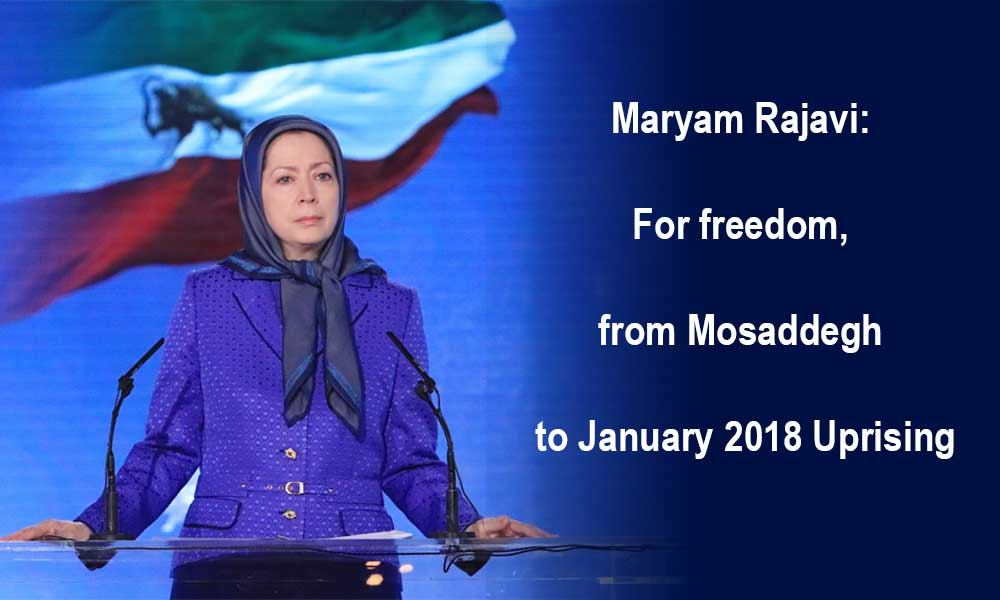 On the anniversary of the demise of Dr. Mohammad Mosaddegh, leader of Iran’s Nationalist Movement, on March 15, 1967, we salute his exalted soul and renew our pledge to continue and advance his path for the happiness of the Iranian nation.

Mosaddegh became an acclaimed international icon for taking bold action to nationalize Iran’s Oil Industry on March 20, 1952, an unforgettable landmark in Iran’s history. By leading this struggle, Mosaddegh became a great teacher of patriotism and an unwavering struggle for independence for Iranian people and nations of the Middle East.

In the first year after he seized power, Khomeini said, “Our path is not the path of oil… Oil nationalization is not an issue for us. It is wrong… to set Islam aside and praise someone who has nationalized the oil.”

Khomeini and his heirs thus established a dreadful dictatorship instead of democracy and freedom which the people of Iran aspired for. They also squandered the country’s oil and put it on sale.

Khomeini and his heirs resent Mosaddegh not only for his brilliant victory in nationalizing the oil, but for the valuable steps he took to put an end to despotism, corruption and poverty and bring democracy to the various realms of life in Iran. He threaded a road which was totally different from those of the Shah and Khomeini.

The pleasant memory of Mosaddegh’s brief tenure has remained in the nation’s mind since he promoted a nationalist and democratic program which was very progressive in his time.

The popular uprising on July 21, 1952, helped him pass his nine-point plan in the parliament. The plan enabled Mosaddegh to balance Iran’s foreign trade– an unprecedented phenomenon in Iran’s history– despite cessation of oil revenues, through imposing severe control on imports and reducing public expenses. He also managed to balance the country’s domestic budget.

For the first and last time in Iran’s history, Mosaddegh succeeded to relieve the country’s reliance on oil revenues for income. His administration introduced a range of progressive social, financial, administrative and political reforms despite tough opposition. He initiated extensive reforms in the Army, in health and education, in the judiciary and legal proceedings, and annulled the special and extraordinary courts.

Mosaddegh introduced reforms based on which landowners had to turn over 10 per cent of their revenues to their tenants. According to the new land reforms, the lands owned by the government were divided into small pieces and sold to the public to build their own housing, as a result of which house rent was lowered for low income families.

Mosaddegh was in office for only 28 months but his brief tenure was a unique example of a government that defended its people’s rights and national interests, was devoid of corruption and tyranny, and was especially characterized by an unwavering struggle for national freedom and independence.

As Massoud Rajavi once reiterated, “Mosaddegh was not an individual but represented a cause. He was targeted from all directions for his cause which cherished independence, freedom, and an unwavering struggle against foreign colonialism, and against domestic dictatorship and fundamentalism.”

The Shah’s path characterized by authoritarianism and dependence on foreign powers failed. The path of religious tyranny also failed.

Inspired by Mosaddegh and the Mojahedin (PMOI), Iran’s young generations have risen up today in dozens of cities across the country. They have a big question: Why doesn’t Iran have a democratic government despite its rich and progressive culture and despite abundant material and human resources?

This is the fundamental question that has made Iran’s people restless in achieving freedom, democracy and equality.

Mosaddegh said, “I will struggle to the last breath for freedom and independence of this country.”

We also pledge to continue the fight for the overthrow of the clerical dictatorship and not relent until the aspirations of our nation for a free, prosperous land free from all forms of discrimination are realized.