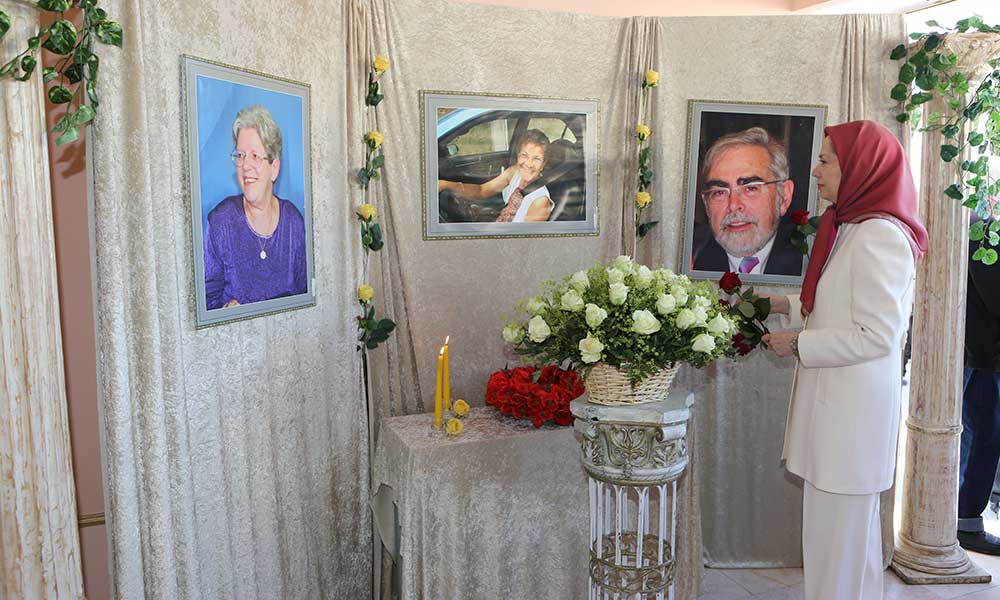 She subsequently addressed the Iranian nuclear crisis and the clerical regime’s bellicose ventures in the region and elaborated on ways to solve and encounter them. Excerpts of the speech follow:

Welcome to this gathering!
First of all I would like to congratulate you on the advent of the Persian New Year. So, Happy Nowrouz!

I wish you a year blessed with health and filled with success.
For us the message of Nowrouz and spring is one of Life’s glorious proliferation and endurance despite all the things that call for death and destruction.

A few moments ago, we honored the courageous resistance of great women and men who gave their lives in the epical confrontation of April 8, 2011, in Ashraf.

We remember those dark days when Tehran’s mercenary Nouri al-Maliki ruled in Baghdad. Today, Maliki is gone and you played a role in that major development by helping to reveal his crimes.

Unfortunately, the persistent medical siege of Camp Liberty continues to take more lives. Nonetheless, these great men and women carry on with their monumental struggle and millions of hours of their work have now transformed their prison into a worthy place for living.

At a time when the world powers, blinded by their lucrative deals, pursued a policy of appeasement of the mullahs’ regime, we called out in unison:

If you continue to appease the godfather of Islamic fundamentalism, this calamity is going to engulf the region and will pose the most serious danger to the world.

We warned all those who ignored the violations of human rights in Iran and turned a blind eye on the executions, murders and torture. Today, even the United Nations underlines the flagrant abuse of human rights in Iran and extends the mandate of its special representative for another year. Amnesty International has declared Iran as having the world’s top record in executions compared to its population.

To those who restrained the Iranian Resistance by false terrorist designations and fictitious cases to placate the mullahs, we always said that not only did they prevent the activities of the alternative to fundamentalism, but they also failed to take notice of the real terrorists. Now the threat has reached their own countries and they have to answer their own people why they ignored the threat for so many years.

To those who surrendered Iraq on a silver platter to the clerical regime and its hirelings, we said don’t you ever imagine that you would achieve peace while you sow the seeds of war and violence.

To those who had qualms about supporting the Syrian opposition while the Iranian-backed Bashar Al-Assad was using chemical bombs against his own people, we said do not waste time and act immediately.

We said, do not let Assad dictatorship buy time and set fire to the Middle East with the calamity of Islamic fundamentalism. Today, everyone knows that the Iranian regime’s crimes committed in Iraq with the help of Maliki and in Syria with the help of Assad have led to the emergence of the Islamic State (ISIS).

Also, everyone knows that the Iranian regime’s nuclear program, revealed in 2002 by the Iranian Resistance, poses a serious threat and it must be contained. Western governments, however, surmise that the mullahs could be transformed from within and reined in by giving concessions.

At this point, let me reassert a number of key issues:

1. The Lausanne statement was a setback which the frightened regime conceded to under pressure, in pursuit of drinking the nuclear poison chalice. However, a non-binding declaration of generalities that does not bear any signatures and does not enjoy the official endorsement of Khamenei, will never be able to shut the paths to the regime’s bomb-making and deceptions.

The Tehran regime is stalling to buy time. Continued negotiations aimed at appeasing this religious fascism do not offer any security to the region or the world from the threat of the nuclear bomb.

The regime must be obliged to comply with the UN Security Council resolutions. This has been the only way to prevent the mullahs from gaining access to the bomb.

The process of negotiations since 2002, and especially the marathon talks of the past 1.5 years, clearly attest that the Iranian regime understands only the language of force and firmness.

The people of Iran do not want this nuclear program which is against their national interests, has so far cost billions of dollars and inflicted enormous damage on them.

2. The Iranian regime has been the principal element in the conception and expansion of Islamic fundamentalism. Any form of fundamentalism, Shiite or Sunni, seeks to impose its inherent barbarism on the world. Therefore, it is totally absurd to count on this fundamentalist regime to resolve the crises in Iraq, Syria and Yemen.

3. The alliance of regional powers and the Operation Decisive Storm aimed at countering the mullahs’ expansionism and invasion of Yemen, indicate a shift against Tehran in the regional power balance.

The mullahs’ dictatorship has indeed become extremely weak and frail. Its economic crisis is profound and social discontent is bristling. The internal power struggle is disintegrating its authority and the nuclear talks have further undermined its autocracy. So the regime’s only remaining ally today, is a lack of vision on the part of western powers to realize this shift in the regional power balance.

4. The only feasible way to terminate the nuclear crisis and end the danger of Islamic fundamentalism is toppling the mullahs’ regime.

The alternative to this regime is a democratic and non-nuclear Iran. The Iranian people and Resistance are able to realize this task with the help of all advocates of freedom and each and every one of you.

I urge you to carry on with your invaluable efforts to this end. The New Year will certainly bring us closer to our goal.

I thank you all and once again congratulate eryovene on the New Year.