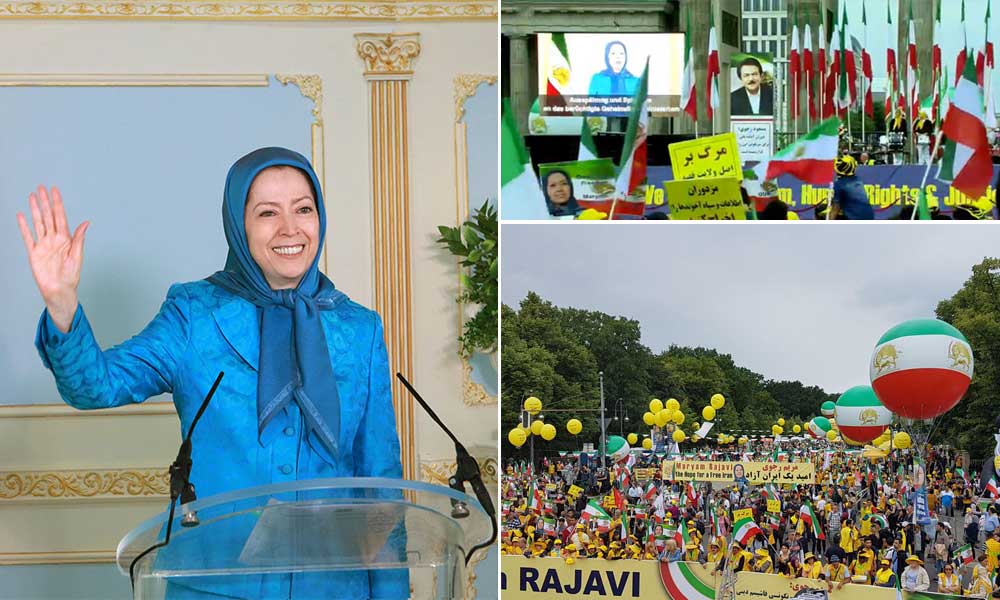 Message to the rally of Iranians in Berlin

Fellow Iranians risen up for Iran’s freedom,
Supporters and sympathizers of the Iranian Resistance who have come from all across Germany in Berlin.
I salute you who have come today, “to be the voice everywhere,” as Massoud Rajavi said, “of the people of Iran and the Army of freedom.”

Dear compatriots,
Your presence here, in this third demonstration following the major gatherings and rallies of our friends and compatriots in Brussels and Washington, D.C., has a clear message.
Addressing our country, those who have risen up, workers, teachers, and other people who are fed up with the regime, you say, move on and on as quickly as you can because the mullahs are stuck in the trap of their downfall.
In this grand demonstration, your message and the message of the people of Iran to the world and particularly to Europe is this: Stop the policy of giving concessions to the religious dictatorship.
The policy of protecting the mullahs against being overthrown and the policy of feeding the turbaned mullahs do not solve any problems of this regime.
Thirty years of constructive dialogue, critical dialogue and dialogues about all sorts of incentives, where did they end up?
Didn’t you see how the uprisings and the protest movement in Iran pushed the regime to its terminal phase?
Didn’t the mullahs’ espionage and terrorist operations in Europe and on the soil of Germany toll the knell for policy change?
Were the regime’s belligerence, missile attacks, recent attacks on oil tankers and the downing of the American drone not enough to consider revising this policy?
Rouhani has been the focal point of Europe’s hope for moderation from within the regime. Now, he boasts of kissing the hands of the Revolutionary Guards for their missile attacks. Didn’t this remove the most significant excuse for getting along with the mullahs’ religious fascism?

Isn’t 40 years enough for espousing the mirage of reform and the myth of moderation and reform in the clerical regime?

Everyone remembers that a decade ago, when the regime’s former president howled that the Holocaust is not true, the German Chancellor reacted by saying, “In 1933, too, Nazi mottos were projected as insignificant remarks. But Germany has learned from its history and is obliged to confront what is in the making.”

Let me ask this: Did the history of Germany and other European nations not teach the world what a heavy and bloody price humanity has to pay for appeasement of fascism?
Exactly one year ago, Germany arrested a so-called diplomat of the regime who had personally handed explosives to two terrorists to use against the Resistance’s grand gathering in Paris.
Before and after that, the German Police has arrested over three years a dozen mercenaries and terrorists who had ties with the terrorist Quds Force and the Ministry of Intelligence. A number of them were tried and imprisoned by the German Judiciary. The question is why such significant incidents do not bring about any change in Germany’s policy towards the Iranian regime?
The mullahs impudently speak every day of resorting to uranium enrichment and preparing for a nuclear bomb. Salehi, head of the regime’s Atomic Energy Organization, admitted that the regime had deceived European countries over the nuclear site in Arak.

Really, if the mullahs were not so sure of their relations with Europe, how could they be so insolent?
From expanding their ballistic missiles program in violation of the UNSC resolution 2231, to dispatching forces to Syria in violation of the UNSC resolution 2254, and stepping up their criminal war in that country
The religious fascism in Iran is indeed the greatest threat to peace in the world today.
The mullahs’ regime has declared war on the peoples of Iran and the region for the past 40 years. So, every concession to them under any pretext has only one outcome: Increasing the likelihood of a disastrous war by the mullahs.

Every one Euro of trade with the mullahs, is equal to one Euro of fuel for Khamenei’s machine to clamp down on the people of Iran and make war in the region. Speaking of peace in the region is a hollow motto if it is not accompanied by sanctions on Khamenei and the Revolutionary Guards.

But let me stress: Regime change is the task of the Iranian people and their Resistance. It is the job of the Army of Freedom and no one else.

As Massoud Rajavi has told young Iranian protestors: The people of Iran have the last say through their resistance units and the Liberation Army.
What we have urged is that western governments do not help the mullahs remain in power. Wasn’t the terrorist designation of the PMOI/MEK and suppression of the Mojahedin and Iranian Resistance in European countries, a disgraceful deal and the best assistance to the mullahs?
What about leaving out the violations of human rights in Iran from the nuclear agreement? What about leaving the path open for the regime’s expansion of its nuclear facilities some of whose equipment and technology are procured from your markets?

What about the sale of tools used for suppression, eavesdropping and espionage to the notorious Ministry of Intelligence and the Revolutionary Guard Corps? And what about providing forums for the regime’s demonization efforts by publishing volumes of fake news against the Mojahedin in the pro-appeasement media?

Yes, all of these are assisting the mullahs.
Germany’s Department of Protection of the Constitution acknowledges every year including just a few days ago, that the Iranian Embassy is engaged in espionage against their opponents, particularly against the Mojahedin and the National Council of Resistance. So, why is it that this embassy is not shut down?
The German Judiciary ruled that the mullahs’ supreme leader, the regime’s president, foreign minister and Ministry of Intelligence made the decision and ordered the the terrorist assassinations in the Mykonos Restaurant in Berlin. So, why is Khamenei not on the terror list of Germany and Europe, and why isn’t he sanctioned by them?

The Government of Germany has also officially confirmed that the Iranian regime had a role in the attacks on oil tankers and has emphasized on the regime’s destructive role in the region. So, why have Germany and the European Union not declared the Revolutionary Guard Corps (IRGC) a terrorist entity?

I’d like to reiterate that the prosecution, punishment and expulsion of the mercenaries of the Iranian Intelligence Ministry and the Revolutionary Guard Corps, as well as the EU’s declaration of April 29, 1997 must be implemented and enforced.

The declaration, which was issued simultaneously with the court ruling on the case of Mykonos Restaurant, stresses that EU relations with the Iranian regime has been made contingent and conditioned on the regime officials’ respect for the standards of the international law and its abstention from terrorist activities.

As for human rights, please allow me to particularly ask Mrs. Merkel to lead a special initiative on the European level against the clerical regime’s violations of human rights to stop among others the persecution, execution and murder of prisoners under torture, and to form an international delegation to visit Iranian prisons and political prisoners.

On behalf of the Iranian people’s Resistance, I would like to reiterate that:

The dossier of human rights abuses and massacre of political prisoners in Iran must be referred to the UN Security Council.
The United Nations’ Security Council must declare that the clerical regime in Iran is a threat to global peace and security.

We also call on all countries to join the international front against the religious fascism.
And finally, I would like to extend my warmest gratitude to the German dignitaries and members of parliament, especially the members of the German Committee in Solidarity with a Free Iran. The support and assistance of these honorable women and men have made a golden page in the history of relations between the nations of Germany and Iran.

I would like to remember our dear Ingrid Holzhüter who supported the Mojahedin and residents of Ashraf until her last day.

I would like to remember Gaok, the German comrade of Mirza Kuchek Khan, who remained loyal to him to the last moment of his life and died with him, thus becoming the historic symbol of friendship between our two nations.

Yes, with a nation determined to overthrow the mullahs’ regime, with your passion and love of freedom, and with the resolve of resistance units and the battle waged by the Army of Freedom, Iran will be free.
Iran will be free! 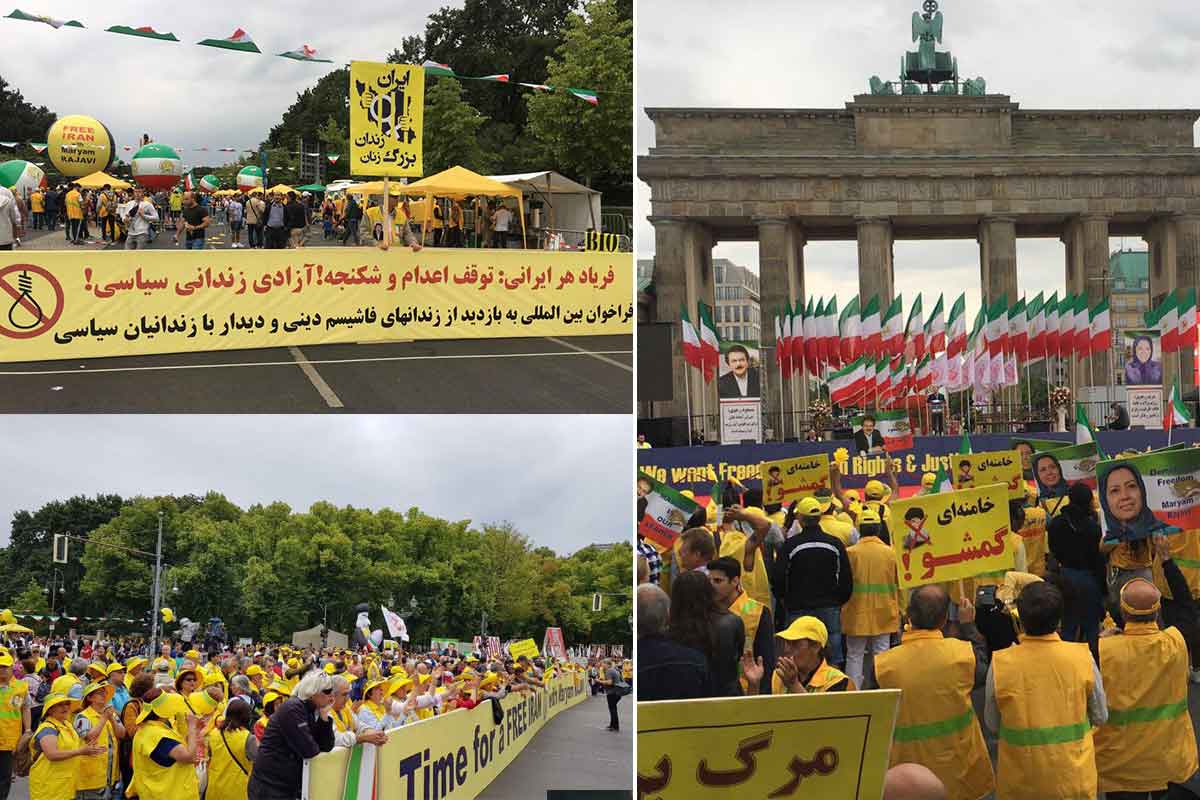