Maryam Rajavi: Iranian people and history are forging ahead on the path towards certain victory 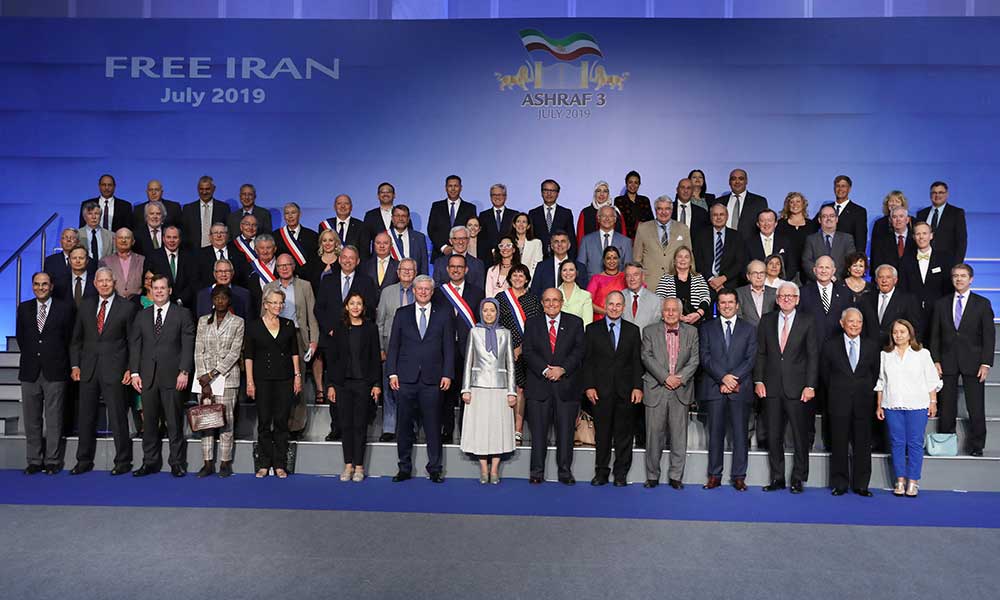 Dear friends,
Ladies and gentlemen,
It is a great pleasure for me to welcome you to Ashraf 3. Once again, I would like to thank you for your efforts in support of Ashrafis and the Iranian Resistance. Efforts which finally led to the collective and safe relocation of the Mojahedin (PMOI/MEK). This was a great accomplishment in which you all played a part.
The mullahs and the Revolutionary Guards sought to massacre these trailblazers for freedom, these freedom fighters. However, we defeated their quest for annihilation. This was but one of the chapters in the struggle for a free Iran. And I am confident that you will continue your efforts, standing with the Ashrafis until the day we reach Tehran and establish a free and democratic Iran.
Today in Ashraf 3, we have gathered in an Exhibition depicting 120 years of the Iranian people’s struggle for freedom. A struggle with countless ups and downs, with many defeats and triumphs, animated by tears and smiles of an enchained nation oppressed by two dictatorships, the previous monarchy and then a religious tyrannical regime. But we are forging ahead on the path towards certain victory.
We have consistently broken new ground and advanced through firing squads, massacres, missile attacks, bombardments and terrorist designations, for the removal of which you all stood by our side.
Time and again, flames were set to burn us down, but we rose again like a phoenix from underneath our own ashes. We successfully prevailed over malicious hostilities, demonization campaigns and unbridled terrorism. Iran’s ruling mullahs want to claim that there is no viable alternative and that the People’s Mojahedin Organization lacks a social base and has no support.
But thanks to our own and our people’s perseverance, history has nothing but scorn for the mullahs.

The missing link in the Iranian people’s 120-year struggle

Through their 120-year-long struggle, our people have found, one by one, the missing links for achieving definite victory, along the way paying the heaviest possible price.
One of the missing links in previous movements of the Iranian people was a coherent organization and an organized struggle, coupled with a determined and battle-hardened force prepared to make any sacrifice necessary. As a result, the people’s previous struggles did not succeed despite all their sacrifices. And, today, Ashraf 3 embodies the organized resistance of the people of Iran for freedom.

As I studied portions of this exhibition, even though I have personally been involved in all the moments of this resistance with all its peaks and valleys for more than 40 years, I could not help but be in awe of the authenticity of these women and men and the magnificence of this resistance on the one hand, and on the other hand be shocked by the crimes of the mullahs’ regime against the best and brightest among the people of Iran.
Time does not permit me to best convey the profound impact of every scene. You will see it for yourself. On the one hand are excessive crimes and on the other, great sacrifices, faith and an epical resistance by pioneers of the Iranian nation, which is truly remarkable.
Of course, this exhibition is just a snapshot of the history of the Iranian people’s struggle for freedom.
In the beginning of the 20th century, during the Constitutional Revolution, our nation managed to push aside the absolute monarchical dictatorship. But in the absence of democratic structures and institutions, despotism re-emerged in less than 15 years. Lacking leadership and organization, freedom lovers were suppressed. Reza Khan staged a coup and established another dictatorship.
Thirty years later, in 1951, Dr. Mohammad Mossadeq, the leader of the oil nationalization movement, formed the first and only truly nationalist and democratic government in Iran. In less than 2.5 years, however, his government was toppled through a coup d’etat. Mossadeq was imprisoned, and his Foreign Minister, Hossein Fatemi, was executed.
And the Shah’s hideous dictatorship lasted for another 25 years in Iran.
If Mossadeq had the chance to institutionalize a democratic tradition in Iran, the situation would have been completely different today in Iran and in the region. And beyond the shadow of a doubt, there would have been no space for fundamentalism and extremism.
The Shah’s true crown prince was Khomeini. The single-party monarchic dictatorship of the Shah did away with all the traditional parties. So, in the absence of basic freedoms and political parties, no one remained in the scene except Khomeini.
The Shah executed or imprisoned the leaders of the Mojahedin and all the progressive forces, empowering Khomeini, a religious authority in exile, to exploit the Iranian people’s uprisings and revolution.
In fact, he hijacked the Iranian people’s revolution and from the outset established his religious dictatorship, which he referred to as the absolute rule of the jurisprudent. Despite all the crimes and massacres he committed, Khomeini failed to extinguish the flames of freedom.

Freedom, the goal of the anti-monarchic revolution

With the rallying cry of freedom and under the leadership of Massoud Rajavi, who had just been released from prison after our people’s uprisings (in 1979), the People’s Mojahedin Organization hoisted the banner of struggle against religious dictatorship since the beginning. Massoud did not let Khomeini hide his bloodthirsty image behind the mask of religion, and he did not let Khomeini establish eternal rule for his Satanic Caliphate under the banner of Islam. Employing the rallying cries of peace and freedom, he did not let Khomeini continue his unjust eight-year war with Iraq.
With the motto of “conquering Quds (Jerusalem) via Karbala” and Iraq, Khomeini’s war cost one million lives and one million people maimed and wounded, only on the Iranian side, along with 4million people displaced, $1trillion worth of damages and the burning down of 50 cities.
Massoud established the National Council of Resistance of Iran in 1981, and six years later, he founded the National Liberation Army of Iran. Early on, shortly after Khomeini returned to Iran, he told Massoud during a meeting in Tehran: “You are young and young people listen to you. Write down a few sentences and say that those who are not religious are not entitled to engage in political activities. And then all paths will be available to you.” Massoud responded by saying that he could not do so “because the Iranian people’s revolution pursued freedom, and in our view, Islam is a religion of freedom.”
So, Khomeini quickly discovered that the Mojahedin would not abandon their goals and their conviction in freedom in order to win political ranks or positions.

40 years of struggle between autocracy and liberty

Over the past 40 years, 120,000 persons have given their lives for the cause of freedom. That includes the 30,000 people who were massacred in 1988 for insisting on their political identity as a member of the Mojahedin. Another half-a-million people were arrested and viciously tortured.
They forced our imprisoned sisters to remain in a squatted position for days and weeks in a container called “the cage” in an attempt to make them surrender. Some of those prisoners, who endured this form of torture for months, are here today. The regime employed other vicious torture methods, including the torture of a mother in front of her child and vice versa, and hanging the prisoner from the ceiling. But despite all these tortures, they could not break their spirits.
This is how the Resistance carried on and extended and expanded to Ashraf and Liberty. The mullahs continued their crimes against Ashraf and Liberty by setting 22 deadlines in 10 years, through a medical blockade, through psychological torture using over 300 loudspeakers blaring into Ashraf for two years, and through 29 ground and aerial attacks, using armored vehicles and missile launchers, including the commission of seven bloodbaths and massacres. This was the price that every member of the Mojahedin has paid with his/her life and emotions.
If you ask any one of them, they will tell you that their perseverance was based on three things:
First, making a conscious choice and decision to pursue the path of God and the people, which is the path of history and evolution;
Second, choosing to pursue the cause of the Iranian people’s freedom, which was also a conscious choice demanding a very heavy toll;
And finally, having a suitable setting for the realization of this goal, namely the People’s Mojahedin Organization of Iran, which for the past 40 years the mullahs have mobilized all their evil powers to destroy.

So, the political scene of the past 40 years in Iran has been a battleground for a conflict between autocracy and liberty pioneered by the Mojahedin. From the country’s north to the south, there is not a single city in Iran that has not been colored by the blood of the Mojahedin.

Ashraf has risen up, proud and powerful

But today, we have reached a historic turning point. An Ashraf which has once again risen up, proud and powerful, shining bright at the zenith of this Resistance.
This Ashraf has been replicated 1000 times in the form of resistance units all over Iran. And a volatile society which is no longer willing to put up with the mullahs, yearning to overthrow them.
On the opposite side, we have a crisis-riddled regime engulfed in warmongering and terrorism, facing international sanctions and standing on its last leg. But the Iranian people and history are forging ahead on the road to certain victory.
On this path, the PMOI/MEK, whose Central Council is made up of 1,000 heroines, is a national asset for the people of Iran. Far beyond being a mere political organization, it is the focal point for their hopes and aspirations to obtain freedom and democracy.
There is no doubt that freedom will prevail over dictatorship. The Iranian people’s moment of liberation is fast approaching.
Thank you all very much. 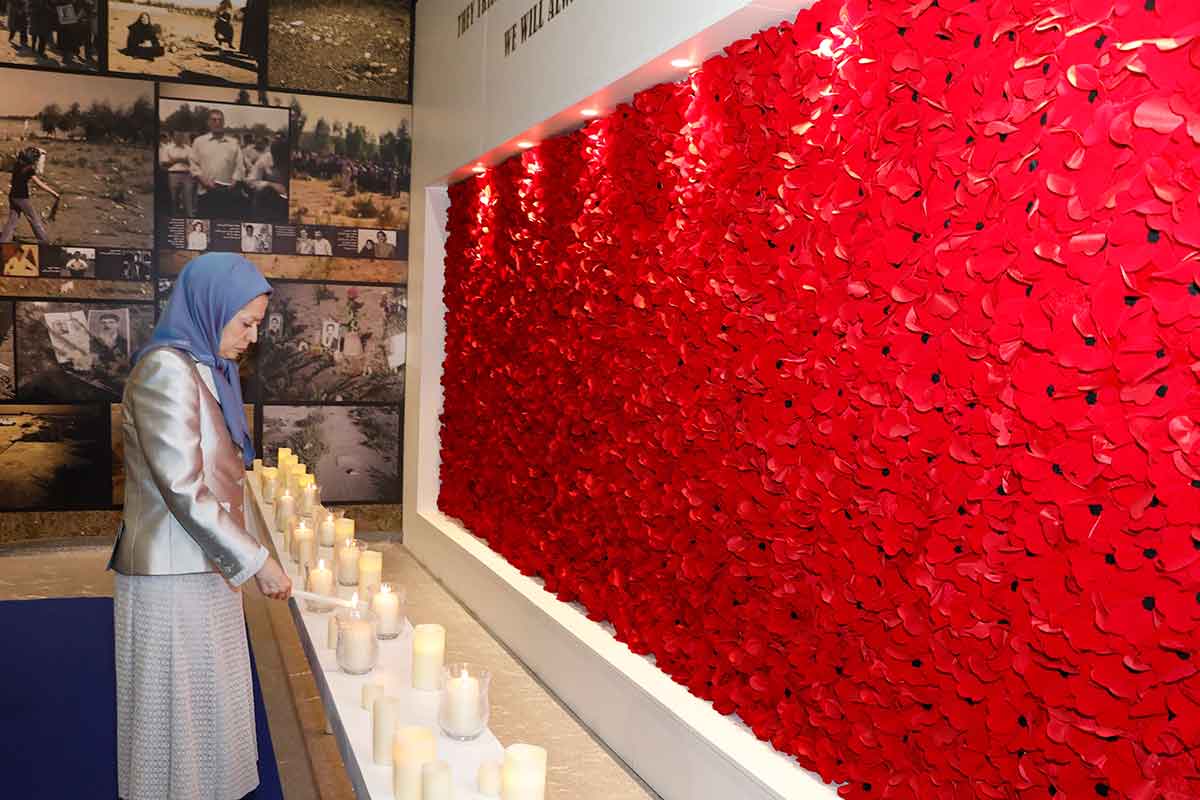 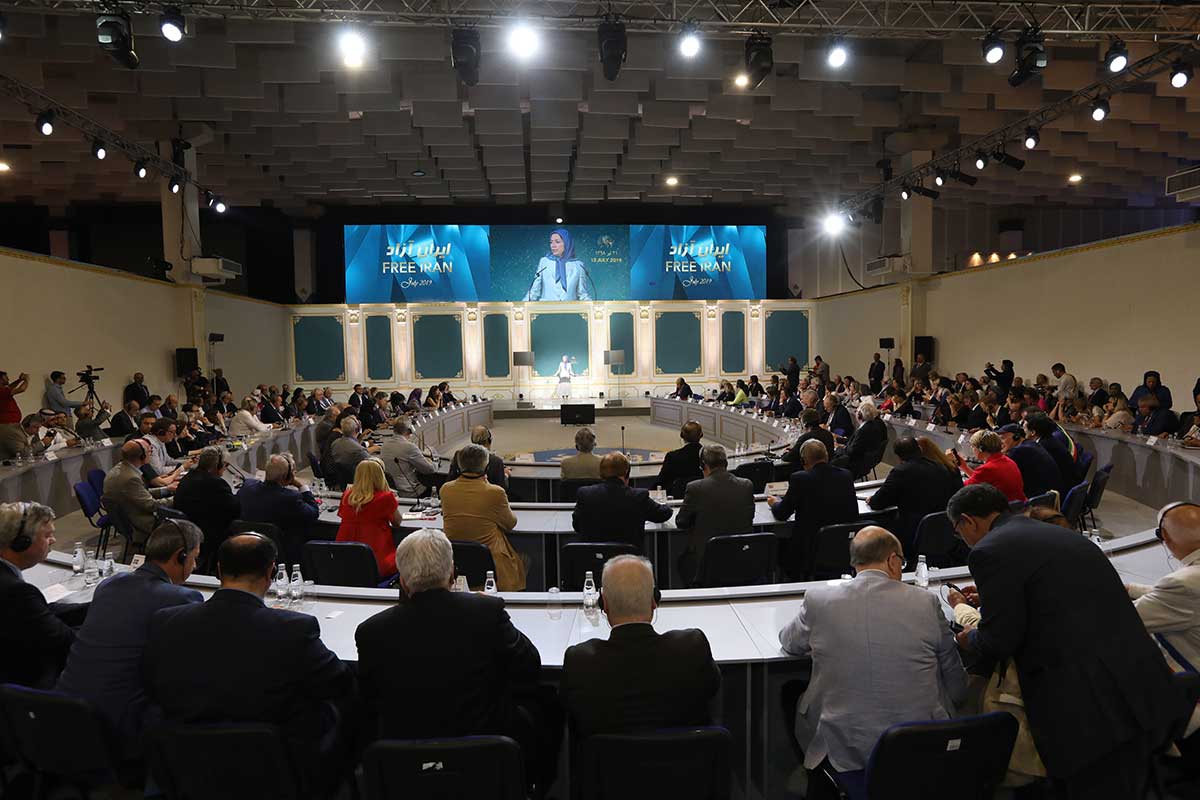