Iranian resistance leader says regime ‘at its weakest point,’ urges Biden to hold it to account 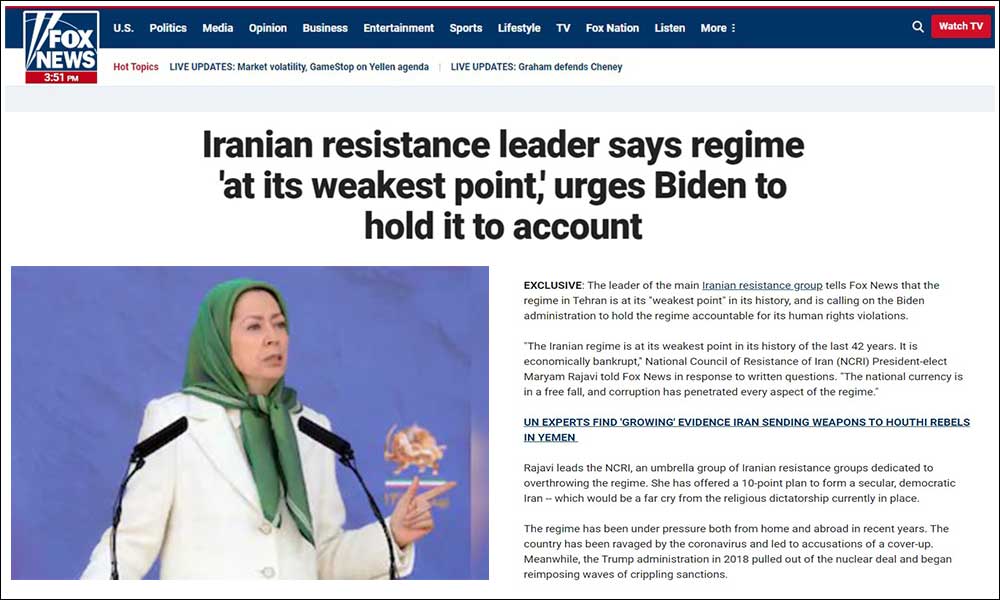 EXCLUSIVE: The leader of the main Iranian resistance group tells Fox News that the regime in Tehran is at its “weakest point” in its history, and is calling on the Biden administration to hold the regime accountable for its human rights violations.

“The Iranian regime is at its weakest point in its history of the last 42 years. It is economically bankrupt,” National Council of Resistance of Iran (NCRI) President-elect Maryam Rajavi told Fox News in response to written questions. “The national currency is in a free fall, and corruption has penetrated every aspect of the regime.”

Rajavi leads the NCRI, an umbrella group of Iranian resistance groups dedicated to overthrowing the regime. She has offered a 10-point plan to form a secular, democratic Iran — which would be a far cry from the Islamic dictatorship currently in place.

The regime has been under pressure both from home and abroad in recent years. The country has been ravaged by the coronavirus and led to accusations of a cover-up. Meanwhile, the Trump administration in 2018 pulled out of the nuclear deal and began reimposing waves of crippling sanctions.

An economic downturn, along with continued pushback against its oppressive crackdown of dissenters, has led to a number of protests in the country — particularly in November 2019 and January 2020. The U.S. estimated that more than 1,000 people were killed in the crackdown on the November protests.

“The Iranian people are extremely embittered and angry,” Rajavi said. “The November 2019 and January 2020 uprisings clearly demonstrated the people’s desire for regime change. Due to the regime’s criminal policies, so far at least 210,000 people have lost their lives to the coronavirus, and there are no global comparables in this regard. This has intensified the people’s dissatisfaction even more.”

But it is unclear to what extent the Biden administration will keep up that pressure.
The Biden administration has indicated that it wishes to re-enter the 2015 nuclear agreement, and Iran’s foreign minister recently urged President Biden to make the first move toward reviving the deal deal “by removing all sanctions imposed since [former President Donald] Trump assumed office”

Rajavi told Fox News that there has been no contact yet between the NCRI and the Biden administration. When asked what her message to Biden would be about how to deal with the regime, she said that the formation of democracy must be the priority.

“Any policy vis-à-vis the clerical regime must take into account the desire of the overwhelming majority of the Iranian people as expressed in the clearest form during the 2019 uprising; and that is to end the religious tyranny and to establish a democratic government,” she said. “Human rights must be placed at the front and center of this policy. And, the Iranian regime must be held to account for gross violations of the Iranian people’s fundamental human rights.”

The NCRI and other opponents of the regime are closely watching the trial of the Iranian diplomat accused of being behind the 2018 plot to blow up the NCRI meeting in Paris. A verdict is expected this week.

Assadollah Assadi, an Iranian diplomat based in Vienna, was one of four arrested for an alleged plot to bomb an annual gathering of Iranian dissident groups in Paris. They each face up to 20 years in prison for attempted terrorist murder and participation in the activities of the terrorist group.

Prosecutors allege that the plot originated from the highest levels of the Iranian government. Iran repeatedly has denied responsibility for the plot. Assadi has denied the charges and his lawyer has claimed “the court is not competent to judge him” due to his diplomatic status.

Rajavi told Fox News that the plot was planned and approved by officials — including Supreme Leader Ali Khamenei and President Hassan Rouhani — and said the trial shows that what she called a “policy of appeasement” had emboldened the leaders.

“This trial demonstrates that it is high time to end the policy of appeasement and adopt a firm policy in its place. This regime can only understand the language of firmness.”