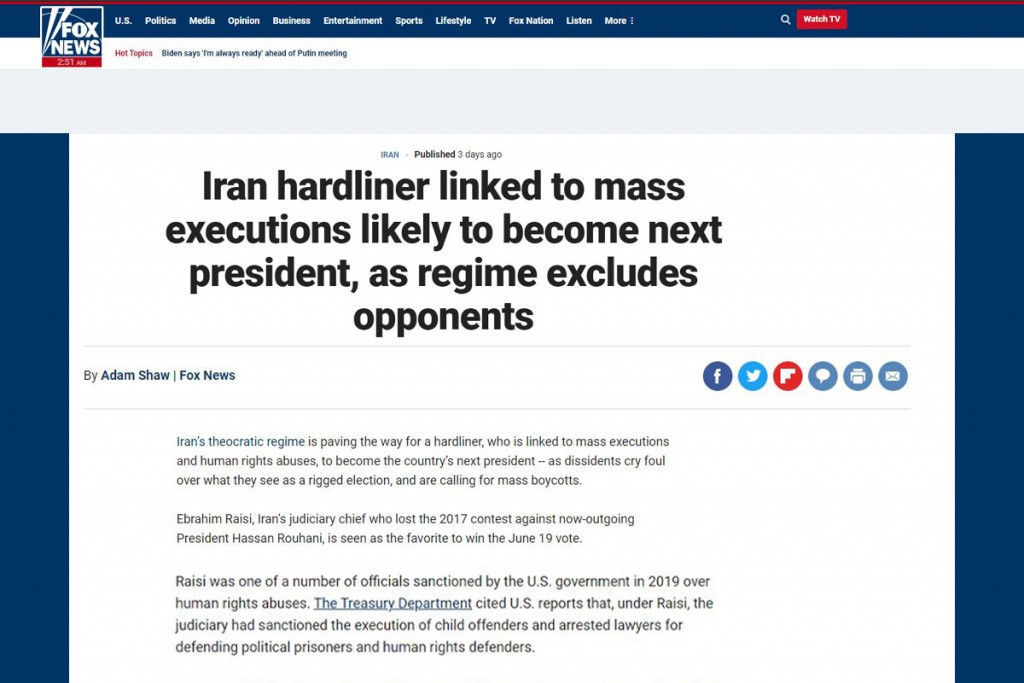 Iran’s theocratic regime is paving the way for a hardliner, who is linked to mass executions and human rights abuses, to become the country’s next president — as dissidents cry foul over what they see as a rigged election, and are calling for mass boycotts.
Ebrahim Raisi, Iran’s judiciary chief who lost the 2017 contest against now-outgoing President Hassan Rouhani, is seen as the favorite to win the June 19 vote.
Raisi was one of a number of officials sanctioned by the U.S. government in 2019 over human rights abuses.
The Treasury Department cited U.S. reports that, under Raisi, the judiciary had sanctioned the execution of child offenders and arrested lawyers for defending political prisoners and human rights defenders.
Raisi previously served as prosecutor general of Tehran between 1989 and 1994 as well as the first deputy head of the judiciary between 2004 and 2014.
The U.S. government has noted his involvement in what it described as a “brutal” crackdown on Iran’s Green Movement protesters following the 2009 election.
Dissidents have zeroed in on his role in a “death commission” that ordered the executions of thousands of political prisoners in 1988.
Iranian political prisoners were asked to identify themselves and those who responded “mujahedeen” were sent to their deaths, while others were questioned about their willingness to “clear minefields for the army of the Islamic Republic,” according to a 1990 Amnesty International report. Estimates for how many were killed range from 5,000 to 30,000.
When Raisi was appointed head of the judiciary in 2019, then-deputy State Department spokesman Robert Palladino called the move a “disgrace.”
“Ebrahim Raeesi, involved in mass executions of political prisoners, was chosen to lead #Iran’s judiciary. What a disgrace!” he tweeted.
“The regime makes a mockery of the legal process by allowing unfair trials and inhumane prison conditions. Iranians deserve better!”
The NATIONAL council OF RESISTANCE of Iran’s (NCRI) President-elect Maryam RAJAVI, described Raisi in a statement as “the henchman of the 1988 massacre” and “one of the worst criminals against humanity in the last 50 years.”
As with most elections in Iran, the contest has been dogged by accusations that it is being rigged to benefit the Ayatollah’s favored candidates — in this case, it is Raisi.
Khamenei’s Guardian Council has disqualified a number of candidates who could compete with Raisi, including a number of moderate and reform candidates. The NCRI has called for Iranians to boycott the election in protest.
The State Department, in response to a request for comment from Fox News, on Saturday said that Iranians “should be allowed to exercise their right to choose their own leaders in free and fair elections.”
“As senior Iranian officials themselves have noted, the disqualifications of qualified candidates by the Guardian Council are a threat to political competition and voter participation,” a spokesperson said.
RAJAVI described it as a sign that the regime in its final stages, as it faces pressure from the resistance in the country and international pressure from outside.
Iran presidential candidates announced with nuclear deal, Ayatollah’s future at stakeVideo
“Khamenei took steps to consolidate the regime and maximize repression by purging presidential candidates who had participated in all of the regime’s crimes over the past 40 years.
This is a clear sign of the regime’s crisis of overthrow and the final phase of the religious, terrorist dictatorship,” she said in a statement.
Raisi has centered his campaign on a strong anti-corruption campaign, promising that corruption will be “dried up” if he is elected.
Raisi also benefits by public discontent with Rouhani who, as a relative moderate by the regime’s standards at least, has been plagued by protests over human rights abuses, a botched handling of the COVID-19 pandemic, and a “maximum pressure” campaign from the Trump administration that has weakened the Iranian economy is only now set to expire with the Biden administration.
An election of Raisi to the presidency could make U.S. and European negotiations with Iran more difficult.
The Biden administration has sought to end the “maximum pressure” campaign and re-enter the 2015 Iran nuclear deal.
Negotiations are ongoing in Vienna to bring both the U.S. and Iran back into the deal. But NCRI activists have warned that Raisi will continue the policies of repression at home, as well as using proxies to wield its influence in the region — and warned nations not to engage with a Raisi-led regime.’
“Any interaction and cooperation with the clerical regime will be in service of the repression and slaughter of the Iranian people, and its nuclear weapons ambitions, and fueling wars in the region,” RAJAVI said.
The State Department told Fox News that its Iran policy is designed to advance U.S. interests, regardless of Iranian political timelines or who is in power.”
The Associated Press contributed to this report.