Message by Maryam Rajavi, to Demonstration by Iranian-Americans 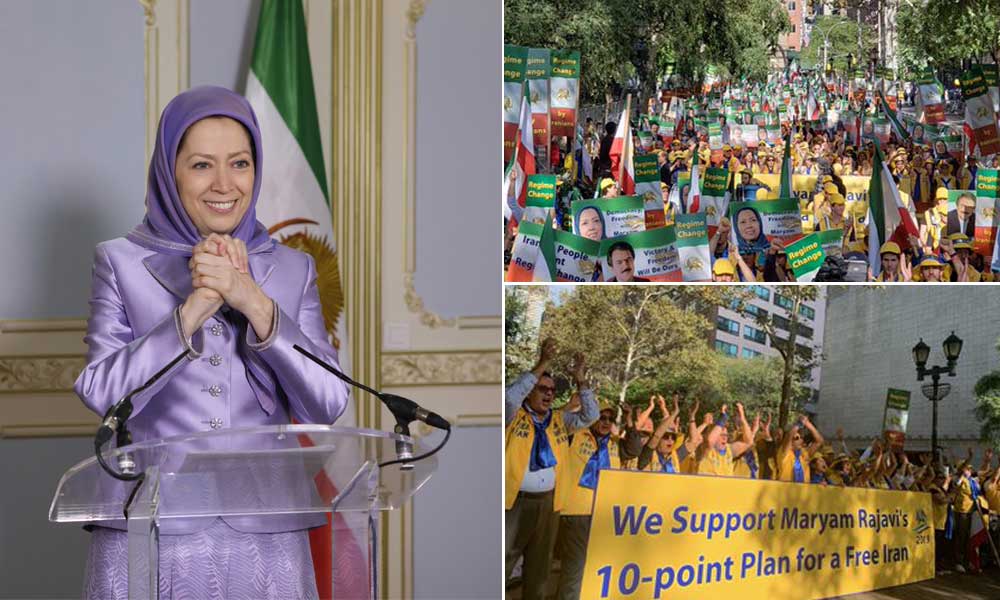 Iranians, supporters of the Resistance, representatives and defenders of the dignity and rebellion of the Iranian people against the murderous corrupt rulers of Iran,
Mayor Giuliani, Senator Lieberman, and dignified personalities who have gathered in support of the Iranian people’s aspirations to overthrow the regime and establish freedom and democracy,
My greetings to all of you.
Your gathering is a resounding “No!” to the presence of the representative of the religious fascism at the United Nations, a person that is proud to kiss the hands of the regime’s Supreme Leader and the IRGC.
It is a decisive “No” to the policy of appeasement vis-à-vis the mullahs, to the policy of buying chances for a regime on the verge of demise, and to the policy of inaction toward a regime that preserves its power through warmongering, terrorism and suppression.
Your gathering says “No” to the continuation of the rule of a bunch of occupiers and thugs in Iran. And, it says “Yes” to the overthrow of this regime by the Iranian people and the Iranian Resistance.
You are the voice of protest and resistance by the Iranian people, a movement whose latest signs were evident in recent days through the brave workers at the HEPCO factory marching in the streets of Arak.
And you are the voice of the Resistance Units and Councils of Resistance who through their courageous activities across Iran have kept the flames of uprising and protests alive.

The Imperative of Advancing Complete Decisiveness

Following the recent attack of the clerical regime from inside Iran against Saudi oil facilities using missiles and drones, the real question facing the international community is no longer about who conducted the attack, but the imperative to advance a policy of complete decisiveness and firmness against this regime.
The religious fascism’s so-called “moderate” president, mullah Rouhani, has in the most concrete and explicit terms supported the creation of such mayhem. Khamenei’s representative in the city of Mashhad has linked this attack to the ruling mullahs and has said that the Ansarallah (Houthis) in Yemen and all the proxy militias in Lebanon, Syria, Iraq and Palestine are one and the same with the Iranian regime.
Following the attack against Saudi Arabia, Khamenei himself made any negotiations at any level with the US contingent on American “repentance” and atonement.
So, what else do the advocates of the policy of appeasing the murderous rulers of Iran have left to say?
The UN Secretary General has said that the Iranian regime’s attack has not only violated the UN Charter but also violates International Human Rights Law.
In this context, why does the UN not withdraw Iran’s seat from this illegitimate regime?
And, why does the UN Security Council not reinstitute the suspended resolutions regarding the regime’s nuclear weapons projects and the banning of uranium enrichment?
In January, US Secretary of State criticized years of American policy during a speech to a university audience in Cairo and said: “We must confront the ayatollahs, not coddle them.” Yes, coddling the mullahs is a policy that has fostered catastrophes and there is only one way to undo the damage and that is to stand on the side of the Iranian people who have risen up to uproot the central banker of terrorism.

This Regime Is Incapable of Reform or Change of Behavior

Developments of the recent months have proven the positions of the Iranian Resistance more than ever before. Years ago, the Iranian Resistance announced some of the most fundamental truths about the Iranian regime, including the following:
– This regime is neither capable of reform nor can it change its behavior;
– It will never abandon weapons of mass destruction, human rights violations and promotion of fundamentalism and terrorism;
– And, it will get emboldened as a result of appeasement, and it only understands the language of firmness and strength.
There is a direct correlation between the regime’s crisis of being overthrown on the one hand and its terrorism and warmongering. Just recently, the regime’s oil minister described the current circumstances of the regime as “the final battle.”
The regime is weak and at an impasse. Its adventurism and evil acts in the region are expanded only because no other party has stood up to it.
At the same time, the Iranian people are the regime’s primary victims.
The most crucial solution to discard the religious fascism is to overthrow it. Overthrow at the hands of the Iranian people and Iran’s organized resistance. Yes, in the words of Massoud Rajavi, Iranian Resistance’s Leader, “No one outside of us and our friends and our people is supposed to bring us freedom or human rights.”

The Clerical Regime, Threat to Global Peace and Security

On this basis, I emphasize the following:
The UN Security Council must declare the clerical regime a threat to global peace and security. And, the dossier of the regime’s human rights violations, particularly the massacre of 30,000 political prisoners in 1988, must be referred to an international tribunal.
Ousting the clerical regime from the region and expelling the IRGC and proxy militias from Iraq, Syria, Yemen, Lebanon, and Afghanistan is an urgent imperative.
We urge all countries to join the international front against the religious fascism.
The international community must recognize the right of the Iranian people’s Resistance to overthrow the religious fascism and achieve freedom.

My Fellow Compatriots,
The ruling regime is surrounded by a disenchanted population who are firmly convinced that their liberation will not be possible without the mullahs’ overthrow.
The days of the religious fascism are numbered. Iran will be free. With the help of the Resistance Units and the Army of Freedom, we will reclaim the most beautiful nation.
Hail to all of you!