Maryam Rajavi: The Iranian nation hears your anthems and your cries for freedom 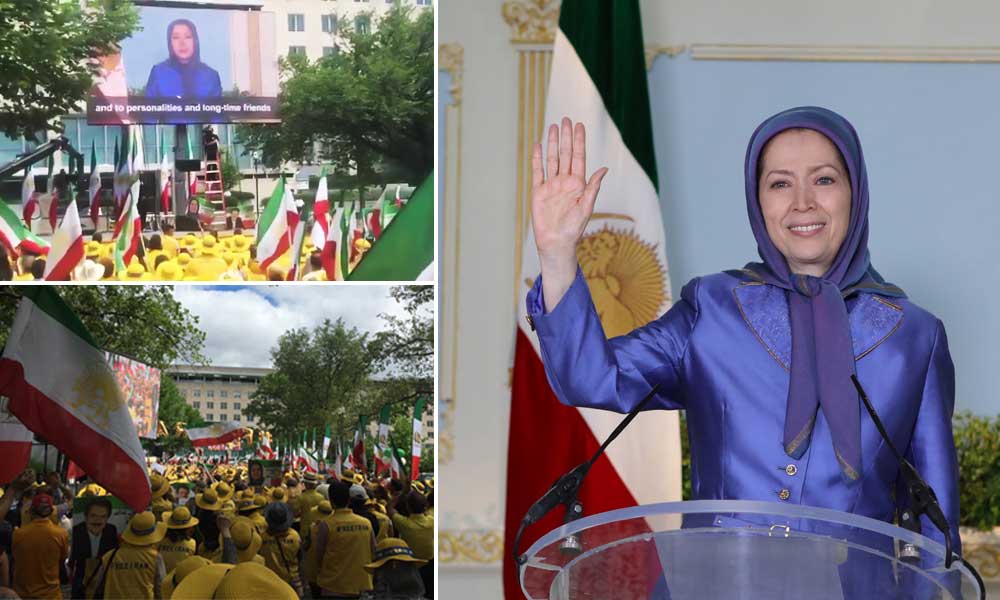 Message to the Iranians’ rally in Washington, D.C.

What is the real question for US and European policies vis-a-vis the fascist religious regime ruling Iran?

Rebels for Iran’s freedom, who have travelled all the way from across the U.S., to come together today in Washington, D.C.
The Iranian nation hears your anthems and your cries for freedom.
Today, you are the voice of an oppressed nation whose assets have been robbed.
Greetings to you, to the elected representatives of the American people who are here, and to personalities and long-time friends and supporters of the Iranian people’s Resistance for democracy and human rights. They have all come today to stand with you.
Congratulations on the anniversary of the resistance, June 20, the Day of Martyrs and Political Prisoners, and on the anniversary of the founding of the Army of Freedom; a movement that has unceasingly forged ahead in all theatres for four decades, relying on its own toil, struggle and sacrifice.

Sovereignty of the people vs. the mullahs’ rule

To fend off the people’s fury, for forty years, the murderous mullahs have pointed their fingers at the U.S. as the enemy. But we were not deceived. As Massoud Rajavi has said: “When we declared ‘down with the reactionaries,’ we stood by it. We have and will continue to declare that what we seek is the regime’s overthrow, overthrow, overthrow.”
Now, the people of Iran cry out in every street and alley that “our enemy is right here; the mullahs lie when they say America is the enemy.”
Indeed, this is a regime whose Constitution has formally replaced people’s sovereignty and universal suffrage with the rule of the mullahs.
The medieval mullahs tell the Resistance’s freedom fighters and Army of Freedom:
• Give up and surrender, otherwise you are infidels and pagans who wage war on God. You are agents of the Global Arrogance; you are a sect and you do not have a place or any base of support among the people in Iran.
• Do not resist, otherwise you are terrorists. Otherwise, you are going to be deluged by fake allegations.

Yes, the disgraceful demonization campaign against the Iranian Resistance in the pro-appeasement media seeks to perpetuate the narrative that the people of Iran are better off with the theocratic rule of the mullahs; There is no alternative, and don’t even think or talk about it.
Their conclusion is:
• The religious fascism must be appeased and there are no other options.
• Now, if the U.S. administration does not appease the mullahs’ tyranny, it would be a warmonger.
• If the U.S. obstructs the Iranian regime’s path toward nuclear weapons, it would be a warmonger.

The absurd comments made by the mullahs and their Foreign Minister about the so-called “B Team” in the United States was a bid to hide their own “bomb” team: From developing a nuclear bomb to bombings in Albania and France, to bombings and planting of mines on oil tankers in the Persian Gulf, to the explosions, drones and missile attacks on Saudi Arabia and targeting of the U.S. Embassy in Baghdad.
When the mullahs pay no price for their conducts, they become more emboldened and go even further. Firing of rockets in Mosul and Basra and the missile attack on the U.S. drone are clear examples.

Indeed, who is the belligerent party? Who launched consecutive rocket and missile attacks at camps Ashraf and Liberty?
Before the terrorist designation of the Islamic Revolutionary Guard Corps (IRGC) and the imposition of sanctions, and before the U.S. pulled out of the nuclear deal, the mullahs had no qualms about claiming that Syria was Iran’s 35th province. They did not hesitate to say that Iraq was their “center and capital” and even that “its geography is inseparable from Iran’s.”
The present IRGC commander in chief once explicitly said: “The geography of our revolution has extended to northern Africa.” He then went on to warn that “it was the flames of the Islamic Revolution that flared” in 1983 in Lebanon, “where a courageous move by a young Muslim buried 260 U.S. marines under the rubble in Beirut, east of the Mediterranean Sea.”
Yes, the people of Iran who have been inundated by floods, destitution and various calamities, are crying out, “Let go of Syria and think about us instead.” But the regime’s meddling and crimes in Iraq, Syria, Yemen, Lebanon and Afghanistan have so far brought them no serious consequences.

Indeed, what is the real question at the core of the U.S. and European policy vis-a-vis the religious fascist regime ruling Iran: appeasement or decisiveness?
The closer we get to the end of this regime, the contradiction and polarization between the regime and regime opponents become more conspicuous.
For the past forty years, the regime has persistently waged wars against the people of Iran and the world. Still, regime apologists and those who benefit from its continued rule feign concern for war. They use this as a pretext to dissuade the world from adopting any form of decisiveness, and instead urge appeasement of the ruling murderers in Iran.
The main victims, however, are the people of Iran. The experience of the past 40 years has demonstrated that the mullahs’ theocratic regime is incapable of any reform or change of behavior. Indeed, as a (Persian) saying goes, “a viper will never give birth to a dove.”
Khamenei says that change in the regime’s behavior is tantamount to regime change.
Therefore, what is the real question before us, our people and our resistance? To surrender or to fight for liberation.
Consider the American Declaration of Independence. The question before George Washington, Thomas Jefferson, Benjamin Franklin and their comrades and supporters was the same. And, similarly, our answer is the same: To resist and fight until victory.

The people of Iran desire freedom and human rights

Hail to the brave women and men who have swelled the ranks in their quest for freedom in the form of resistance units and popular resistance councils, and you should be proud to have extended these ranks to the U.S. capital.
Three months ago, for the first time in the past 70 years, the President of the United States in his Nowruz (Persian New Year) message to the people of Iran attested to the fact that:
“The Iranian people desire to reclaim their country’s proud history, expressive culture, and rightful place on the world stage. They deserve a government that is accountable to them and that treats them with dignity and respect.”
He emphasized: “We pledge never to turn a deaf ear to the calls of the Iranian people for freedom, and we will never forget their ongoing struggle for human rights.”

Yes, we do not want anything more than freedom and human rights, which will of course also open the way for us toward development and justice. This will ensue peace and security in Iran and the Middle East; an Iran free of religious fascism, a non-nuclear Iran and an Iran without terrorism and belligerence.

Freedom will prevail over the Shah and the mullahs

As Massoud Rajavi has said, this outcome will “offer peace, security, democracy, human rights, stability, rebuilding, friendship, and a non-nuclear Iran that seeks economic cooperation and development in this part of the world, and a country that will respect international laws and conventions.”
This is why, above and beyond anything else, the mullahs are most fearful of change at the hands of the Iranian people, the Iranian Resistance and the People’s Mojahedin Organization of Iran (PMOI/MEK).
It is right at this point that it becomes clear that the religious dictatorship is a paper tiger when it comes to facing off with the Iranian Resistance. And its fate is no different from the fate of the Shah’s dictatorship. This is the verdict of history and the yearning of the people of Iran.
Yes, freedom will prevail over the Shah and the Sheikh (mullahs).

My fellow citizens,
Dear friends who have defied religious dictatorship and fascism,
The regime is getting weaker by the day, and with every passing day it gets a step closer to its downfall.
Consequently, all of us bear heavier responsibilities.
This is the time for us to be on alert.
Without doubt, the faltering mullahs’ dictatorship cannot withstand our nation’s resistance, uprisings, and the great Army of Freedom.
Hail to freedom
Hail to all of you 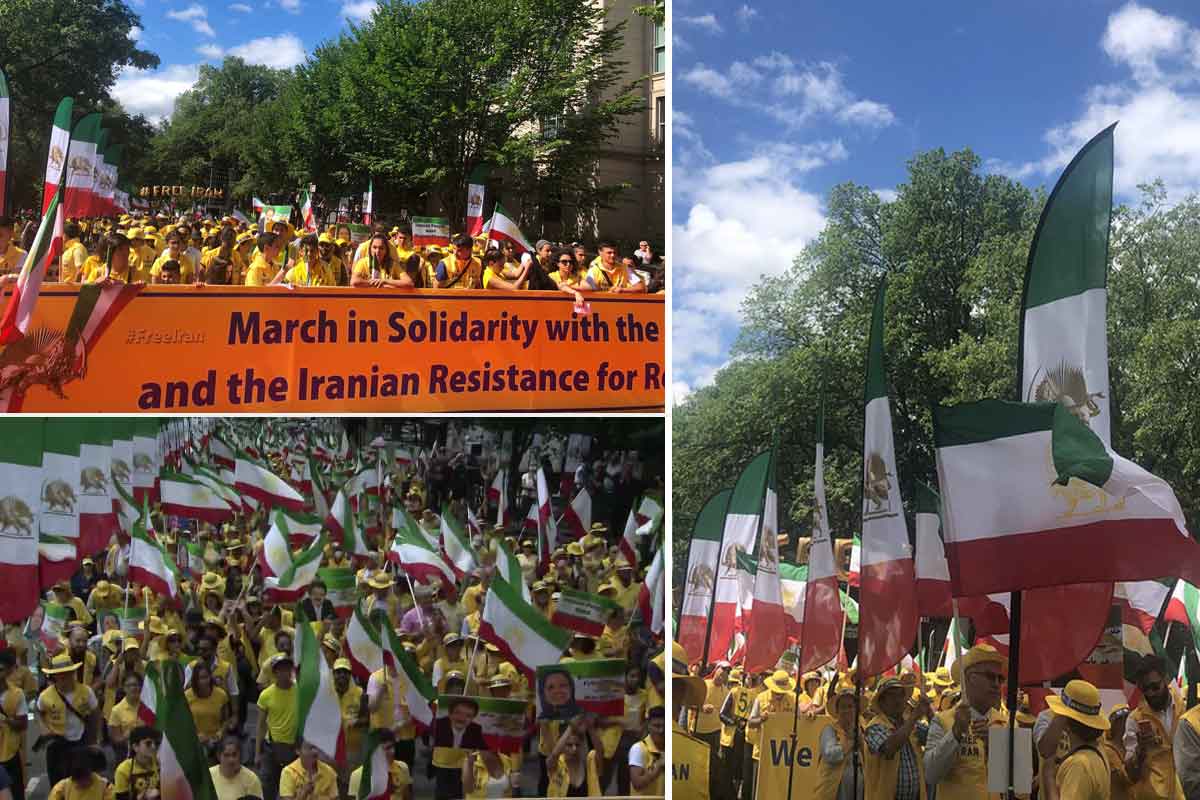