Maryam Rajavi calls for national solidarity versus the devastating floods, and the ominous torrent of the clerical regime 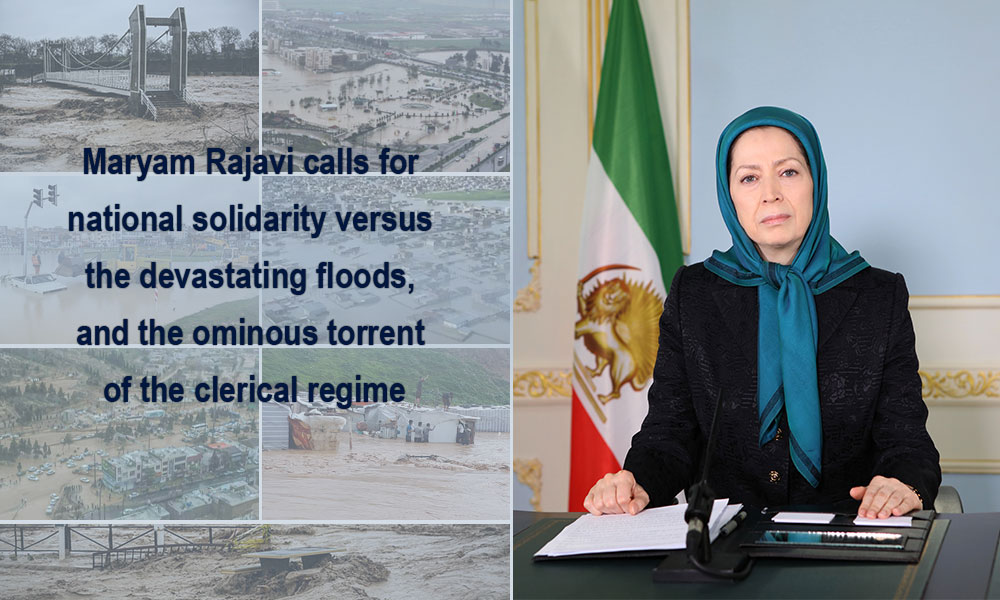 My suffering fellow compatriots across the nation,
My dear mothers, fathers, daughters and sons who are outraged at the evitable catastrophic consequences of the flooding,
Your anger at the mullahs’ theocracy has terrified the entire regime as you recognize them as culprits of so much destruction, death and sorrow.

You are right when you say that the flash floods have driven the mullahs to the end of the line. And you are right when you say the floods are the consequence of the mullahs’ overwhelming corruption and crimes.
This disaster once again proved that the ruling mullahs’ criminal 40-year policy of plunder and pillage has taken a heavy toll on the lives and livelihood of our people in every flood and earthquake.
Why did so many of our fellow compatriots die and get injured in Shiraz after just a 10-minute rainfall, with such huge destructions?

The corrupt mullahs have inflicted this catastrophe on Shiraz and its valiant people. They destroyed the channel which used to lead flood waters out. In the dry seasonal river bed beside Darvazeh Quran, they built urban facilities to gain huge profits for themselves and their accomplice.
In Golestan Province, it has been several years that they have failed to dredge the Gorgan River. They have destroyed vast parts of the forests and pastures, and they have evaded to drain the farms and manage the watershed.

In other cities, they have constructed buildings in the periphery of rivers or have blocked the natural paths of rivers. In implementing such a corrupt policy, they have taken over, damaged or sold river banks, sea shores, foothills of mountains, and jungles which are public properties.
As Massoud Rajavi has declared, “The outcome of the mullahs’ rule, the rule of the Velayat-e Faqih, and this ominous regime has been none but destruction of several generations of people and of the country’s productivity, prosperity and environment, disappointing the people and ruining their trust; an economy in shambles, a society in distress and a nation badly betrayed.”

Indeed, the clerical regime is truly an occupier regime.
Amid the disastrous flood and such vast devastation, there is not much presence of aid workers and relief agencies. Instead, the mullahs have dispatched the Revolutionary Guard Corps and the Bassij paramilitary force to quell the outbreak of protests.

Shiraz needs emergency aid for the injured and assistance to clear the ruins and rubble, but Rouhani hastily sends there his Minister of Intelligence and his mafia of executions, suppression and terror.
Yes, this is the end of the road for a regime that has poured the wealth of Iranian people down the throat of Bashar Assad, or has spent it for the Revolutionary Guards and Bassij. From our people’s wealth, it has been funding terrorism and nuclear and missile projects. And otherwise the regime’s corrupt leaders and officials have robbed and plundered our nation.

Taking shelter in their (clandestine) “missile cities” will no longer save the mullahs, because now is the time for rebellious cities and resistance units. The time has come for protests and uprisings by a nation that is determined to salvage themselves, their livelihood, and the future of their children from the evil torrent of the Velayat-e Faqih theocracy.

As it has been said in the Quran,
ان الله لایغیر ما بقوم حتی یغیروا ما بانفسهم
“Indeed, God will not change the fate of any nation unless they rise up to change their own situation.” (Chapter 13, Raad or Thunder, verse 11)

The arisen people of Iran seek to liberate themselves from the evil and villainy of this depraved regime. They seek to establish a country and a society ruled by freedom, democracy and equality, so that no one could ever again destroy the most basic and essential environmental requirements of their cities and villages, leaving them defenseless.

My suffering compatriots,
Today, all Iranians are whispering this poem by Hafez of Shiraz who wrote, “How beautiful is Shiraz and its unparalleled state, may God save it from any harm or decline.”
We pray that God may save Shiraz and all Iranian cities and villages from decline and from the grief and gloom of the mullahs’ rule.

Without doubt, you courageous women, men and youths, in Shiraz and other cities and villages of Iran will do away with the shameful rule of the mullahs.
Again, I would like to extend my condolences to the bereaved families in Shiraz and in other provinces impacted by flood, and I pray for the quick recovery of those injured and wounded.
All Iranians are really upset because of the appalling situation of our people in this tragedy.
They have heard the cries of those stuck in cars in the middle of flash floods without any rescuers, asking for help. They have heard of the innocent children drowned and the people who have lost everything.
I hereby call on all my fellow countrymen and women to cooperate together in the flood-hit areas and in other areas which are in danger.

The only way and the best way is that we help one another. No one and no other power is more effective and more accessible than the power of solidarity among us.
I urge everyone, particularly the young men and women, to form their popular councils in every neighborhood, and in every city, town and village to confront the floods and their disastrous consequences.

All the resources stolen by the Revolutionary Guard Corps, the Army and other government agencies, belong to our people. They must be placed in their totality at the disposal of our people so they could prevent further damage and devastation.

I urge the freedom-loving youths and members of resistance units and councils to not lose any opportunity in helping the flood-hit families. Help the people organize their popular councils which is the only solution for prevailing over this devastating flood.

Rush to the aid of families affected by floods and show them your love and compassion. The mullahs have inflicted such a calamity on our people and cities. Let us build amid such disaster, our own solidarity and kindness which is the greatest strength of our nation.

Let us build with our tears and sorrows a force of sympathy and unity against the mullahs. In these difficult days, rely on one another and let people rely on you. Take one another’s hand and let us come together to advance our plans for a free and prosperous Iran.

Once again, my sincerest condolences and sympathies to my dear compatriots all across Iran