Maryam Rajavi: Qalibaf, regime’s new parliament speaker, has murdered members of the PMOI/MEK, is an accomplice of Ebrahim Raisi, the Judiciary Chief 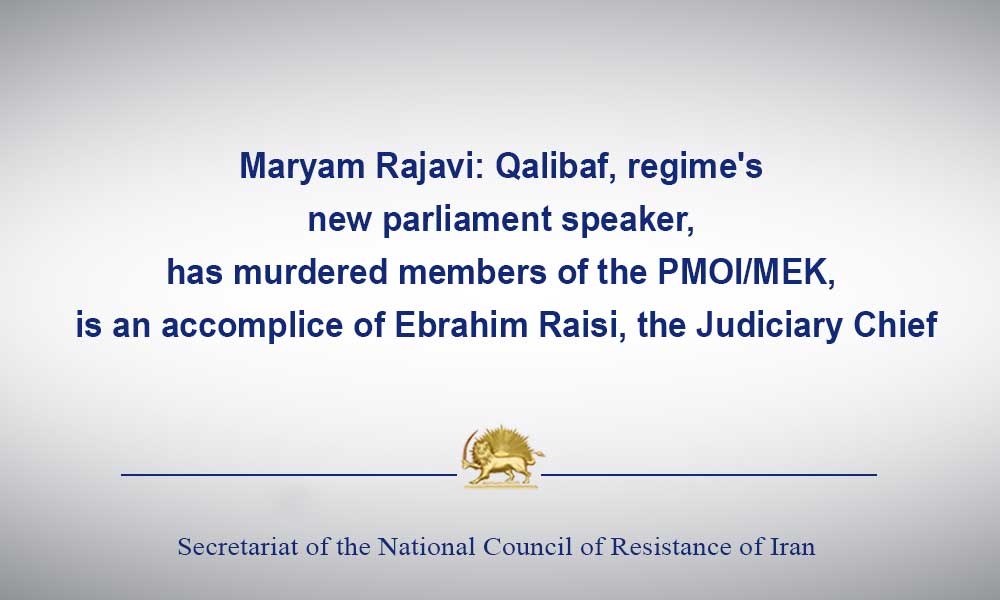 Mullahs’ parliament is the flipside of, and indispensable to, the Hezbollahi government, Khamenei called for.

Terrified of the uprising, Khamenei had purged candidates from the rival factions to plan for the formation of such a parliament and government. But this is a serious step towards working to end the regime.

Mrs. Maryam Rajavi, the President-elect of the National Council of Resistance of Iran (NCRI), described IRGC Brig. Gen. Mohammad Baqer Qalibaf, the regime’s new Parliament Speaker, as the murderer of the Mujahedin-e Khalq (PMOI/MEK) members, and an accomplice to Ebrahim Raisi, the regime’s Judiciary Chief. Qalibaf is among primary officials involved in suppression and warmongering and engaged in theft and plunder within the clerical regime. Appointing him as the Head of the Legislature by Khamenei is a new step towards further contraction of the ruling system in the final phase of this regime.

Mrs. Rajavi added, the IRGC-dominated Parliament is the flipside of, and indispensable to, a Hezbollahi Government, for which Khamenei had called on May 17. Terrified of an uprising, Khamenei had long planned to purge the candidates from the rival factions and hold a sham and engineered election for such a parliament and government to be formed. Nevertheless, Qalibaf’s appointment as the Parliament Speaker is no doubt a serious step towards working to end the regime.

Qalibaf, who takes pride in killing the PMOI/MEK members in Operation Eternal Light in 1988, acknowledged three years ago that “only four percent of the population is satisfied with the current situation,” as reported by Tasnim News Agency, on April 15, 2017.

Since the onset of the clerical regime, Qalibaf has played an active role in the suppression of the MEK, protests in Tehran, and the people of Kurdistan. He was actively involved in the unpatriotic war with Iraq. According to the regime’s media and agencies, during his 12-year tenure as the Mayor of Tehran, he stole and embezzled billions of dollars.

In 1983, during the unpatriotic war, he was appointed commander of the 5th Nasr Division and sent thousands of children and students to minefields.

In July 1999, despite being IRGC’s Air Force commander, he personally took part in the suppression of the students’ protests. In 2013, as a Presidential candidate, he said in this regard, “When the 1999 incident occurred at universities’ dormitories, Mr. Soleimani (i.e., IRGC commander Qassem Soleimani) and I wrote that letter (to the President). When students began to march on Khamenei’s office, I was the IRGC’s Air Force commander. My picture on a motorcycle while carrying a big stick is available. I was with Hossein Khaleqi, with whom we were on the street to quell the protests. Wherever necessary, we come to the street and beat (people) with sticks.

In 2,000, Qalibaf was appointed as the commander of the State Security Force (SSF) and set up a suppressive police unit 110. In September 2002, he implemented the plan for moral security. In a meeting at the National Security Council, during student protests in 2003, he said, “As the SSF commander, I will personally crush and quell them.”

In 2005 Qalibaf became the Mayor of Tehran, and for the next 12 years, he was involved in stealing, looting, plundering, and including offering properties of Tehran’s municipality to the regime’s apparatchiks at great discounts. During the same period, the gender separation plan was implemented in municipalities.

On July 12, 2017, citing a “letter of the General Inspection Office,” the state-run Iran daily wrote, “Tehran Municipality has been accused of bribery, embezzlement, fraud and misusing public property amounting to 22,000 billion tomans… According to this letter, Tehran Municipality had given parcels of lands in the northern part of Tehran at a 50% discount to some of its managers, members of the city council, a member of parliament, an SSF official and several security officials. The letter from the General Inspection Office stated that these lands were priced at very low (unrealistic) and with a significant discount of at least 100 million to more than one billion tomans and also in the form of 600-month installments to the recipients. It has also been announced that 200 apartments, villas, and Tehran Municipality land had been sold for 2.2 trillion tomans less than the original price.”

On August 20, 2019, the state-run media, including the state-run Tabnak website revealed another part of Qalibaf’s theft and embezzlement, including “47 secret bank accounts, an unpaid Judiciary debt of 229.7 billion tomans to Tehran’s municipality, 497 billion tomans that the IRGC’s Cooperative Fund owed to the municipality, a payment of 60 billion tomans and the handover of 80,000 square meters of land to “Imam Reza” Foundation (owned by Qalibaf’s wife), and the purchase and sale of a Metro station.”

Secretariat of the National Council of Resistance of Iran (NCRI)
May 28, 2020