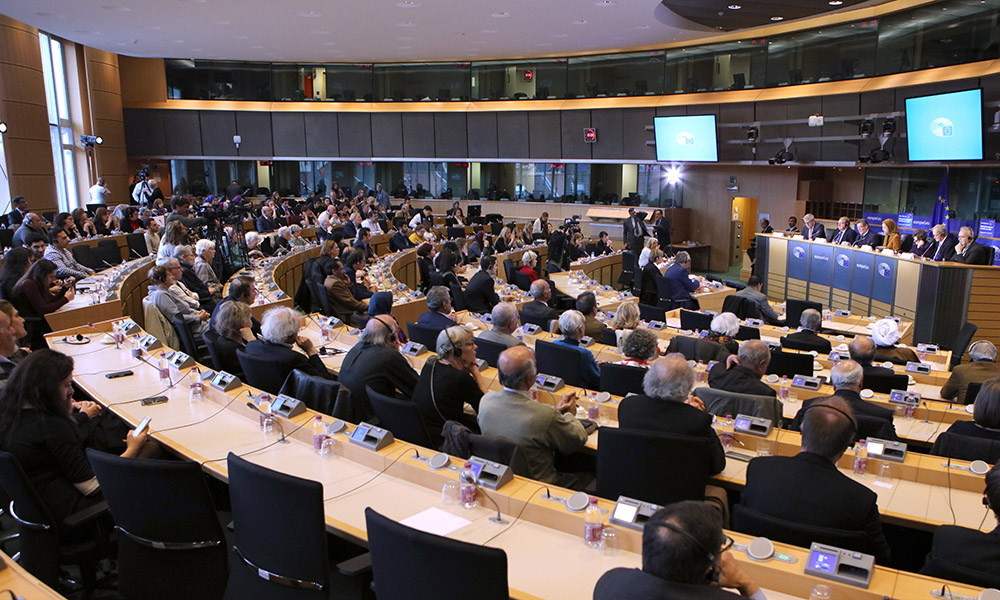 Distinguished Members of European Parliament,
It is a great privilege to be here, once again, among the representatives of the people of Europe, men and women who are pioneers in the modern world in defending democracy and human rights.
As I am standing here, today, the situation in Iran is reaching an explosive state.
Last month a devastating earthquake in western Iran took a heavy toll.
Nevertheless, it highlighted a number of major realities:
 The extensive corruption pervading the regime,
 the catastrophic state of the country’s infrastructures,
 the government’s disability to solve the most basic problems of our people,
 and the general solidarity with earthquake victims vis-à-vis the regime.
Fearing eruption of the local people’s outrage, the regime dispatched its Revolutionary Guards and anti-riot forces to the region before sending any relief. But this did not prevent the people’s furious protests.
The government’s corruption is to the extent that large parts of the popular aid collected for the victims were stolen before reaching them.
Another indication of the popular desire for regime change emerged on October 29, known as the Day of Cyrus, the Great. He declared the world’s first human rights charter. The regime’s suppressive forces were mobilized to prevent people from converging from all across the country on the tomb of Cyrus, the Great in Pasargadae. But thousands of people travelled long distances towards Pasargadae and the country saw a popular confrontation with the ruling religious dictatorship.
The country’s financial structure is about to collapse.
Two weeks ago, the regime’s Interior Minister admitted that some 150 acts of protests take place in the country every day.

A nationwide protest movement has been going on for one year and growing, by people whose assets have been plundered by government-backed financial institutes. These protests have on numerous occasions turned into political protests against the regime in its entirety.
In the meantime, the movement calling for justice for the victims of the 1988 massacre, which has been actively organized by the Iranian Resistance, has now turned into an expansive social movement.
This was one of the main reasons for Khamenei’s failure in the election sham in bringing into office one of the officials in charge of the massacre.

The Iranian people widely embraced the motto of “no to the executioner, no to the charlatan, I vote for regime change” which targeted both main candidates.
The UN Secretary General in his latest report to the UN General Assembly noted the receipt of a large number of complaints from victims’ families.
In short, the people of Iran’s confrontation with the mullahs’ regime is growing every day.
What are the mullahs doing to save their rule?
The regime has already exhausted its strategic resources. Economically, they are on the verge of bankruptcy. The nuclear agreement has not solved any of their problems. Socially, they have become ever more isolated. They failed in their strategy of destroying their main opposition and could not prevent the relocation to Europe of PMOI members out of Camp Liberty prison in Iraq.
In such circumstances, the regime’s solution has been more suppression and more executions.
Look at the report by the UN Special Rapporteur on the situation of human rights in Iran. Rouhani’s promises have proved to be none but lies intended to create a false sense of hope to reduce the public’s anger and mislead the international community.
These measures, however, are no longer able to contain a nation eager for change. Indeed, Rouhani personally removed his mask of moderation by declaring absolute support for the IRGC’s repressive conduct at home, terrorist groups in the region, and the regime’s missile program.
The regime’s second means of survival is to step up its meddling abroad.
This policy does not reflect the regime’s strength but its deep internal crisis which it tries to cover up by expanding its influence in the region. Indeed, it seeks to put up a hollow show of force to discourage the international community from adopting a decisive and firm policy against it.

The regime’s leaders, including Khamenei, Rouhani and IRGC commanders have recently made some revealing remarks:
That they will continue with their meddling and aggression in the region, and support for terrorism in Iraq, Syria, Lebanon, Yemen and other countries.
That they will continue to support Assad’s dictatorship.
That they will continue to fund and arm their affiliated militias and terrorist forces in the region.
That they will continue with their missile program.
They have reiterated that the reason they are able to control the internal situation today is “due to having a specific strategy for fighting beyond the borders.”
As long as the international community fails to hold the Iranian regime accountable for its destructive behavior, the mullahs will carry on with their dangerous adventures.
As long as the international community is under the illusion that they can contain the Iranian regime by giving concessions, they will only end up helping the mullahs to carry on in the same manner.
The solution is showing firmness, not giving concessions.
The regime engaged in the nuclear negotiations and took one step back, only and only when it feared that continued international sanctions could spark massive uprisings in Iran.
Let me be explicit.

The EU has unfortunately abandoned its values in order to promote trade with the mullahs.
The EU has turned a blind eye on the gross violations of human rights in Iran.
Signing economic contracts with the IRGC, which controls the greater part of Iran’s economic sector, is a shortsighted policy that will endanger peace and stability even further.

The EU can play a positive role in peace and stability in the Middle East. Here are some concrete steps that must be taken:
• Hold the Iranian regime accountable for its crimes against the people of Iran and particularly for the massacre in 1988. Condition all trade and commercial relations with the regime on end to executions in Iran.
• Demand immediate expulsion of the IRGC and its proxies from Syria and other countries in the region, otherwise they should face severe consequences.
• Demand immediate halt to the regime’s ballistic missile program, otherwise impose severe sanctions on the regime’s oil exports and access to international banking system.
The regime’s ballistic missile program is not to defend Iran. It is against the people of Iran and designed to create crisis in the region.
Failing to deal decisively with the religious fascism ruling Iran will impose a deadly war on the region and the world. This is the last chance for Europe to adopt the right policy vis-à-vis the clerical regime.
The mullahs’ regime needs Europe for its survival.
It takes advantage of Europe’s diplomatic and commercial collaboration for its own dangerous objectives, including its destabilizing efforts in the region and domestic repression.
As acknowledged by the European intelligence agencies, the regime uses European markets to complete its nuclear program. It recruits European companies to print fake banknotes.

Let me conclude by reminding a historic moment in our country’s history.
On December 31, 1977, U.S. President Jimmy Carter who was visiting Iran, said, “Iran, because of the great leadership of the Shah, is an island of stability in one of the more troubled areas of the world.”
In 1978, ten months after the first street protests erupted in Iran, US National Security Advisor Zbigniew Brzezinski sent Carter a cheerful note based on intelligence assessments saying, “Good news! Iran ‘is not in a revolutionary or even a pre-revolutionary situation.’ There is dissatisfaction with the Shah’s tight control of the political process, but this does not at present threaten the government.”
This comment was made only a few months before the shah was toppled by the Iranian people.
Let there be no doubt, the people of Iran will overthrow the mullahs’ regime.

The European Union must decide on which side it wants to stand. For years, the representatives of the people of Europe have stood on the side of democracy and human rights.
There is a democratic alternative to the mullahs’ regime which believes in free elections, gender equality, separation of religion and state, equal rights for religious and ethnic minorities, and a non-nuclear Iran.
I thank you very much. 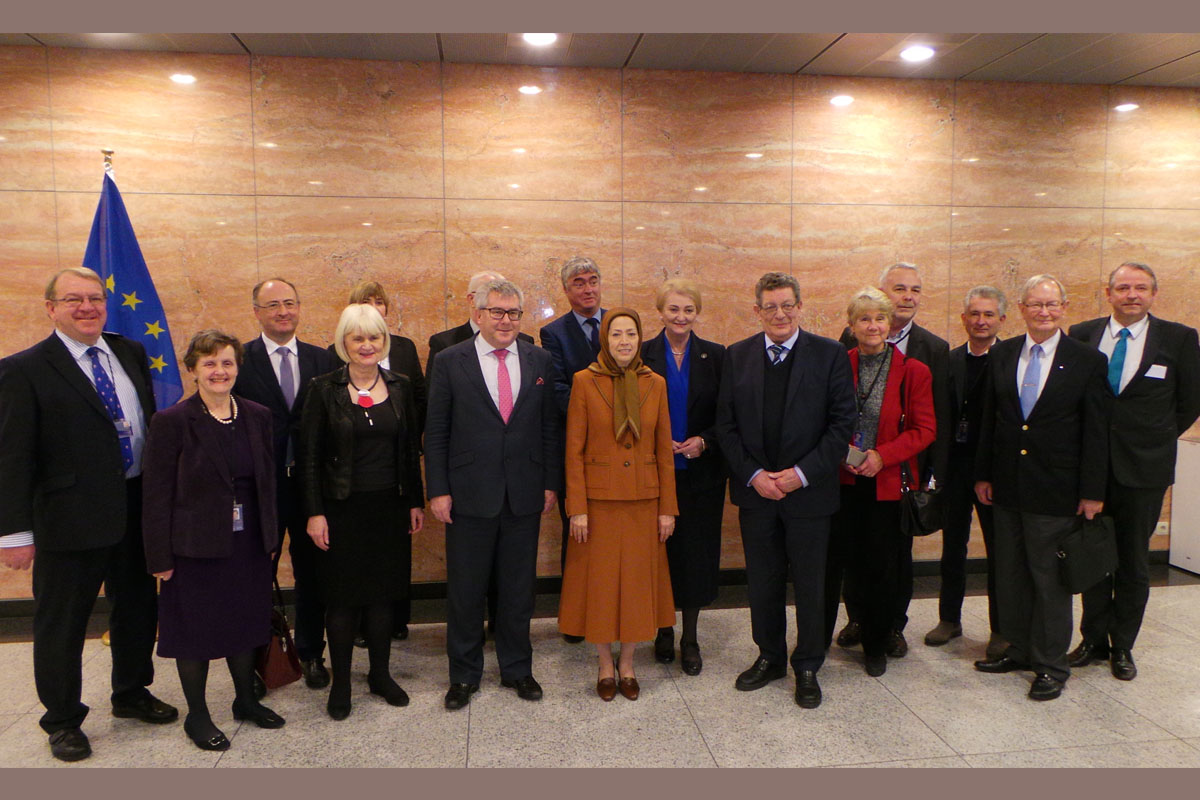