Maryam Rajavi : Silence on the mullahs’ terrorism, the most damaging kind of appeasement of the religious dictatorship 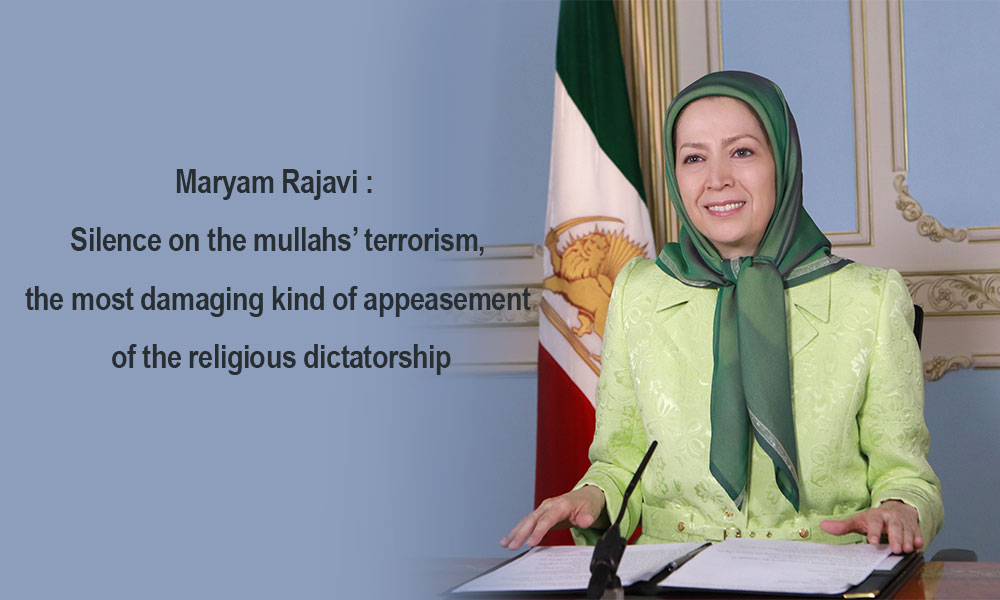 Maryam Rajavi addressed a seminar on “Iran’s New Wave of Terrorism – The EU and US responses,” held on October 4, 2018, at the Residence Palace in Brussels. In her video message to the political dignitaries and audience in the seminar, Maryam Rajavi said:

Dear friends,
I would like to express my appreciation for your attention to the necessity of countering terrorism by Iran’s ruling mullahs.
By using terrorism, the regime wants to compel the world to silence and surrender. The best response to such a regime is firmness. This is a responsible policy for global peace and security.
The mullahs are highly motivated for terrorism.
Popular protests have been continuing for nine months in Iran and the mullahs have not been able to stop them. As the regime’s highest officials have confessed, thePMOI has had an increasing role in organizing and leading the uprisings.
The country’s currency has lost 80 percent of its value in 12 months.

In the meantime, two significant changes on the international level, have stuck the regime in a tight corner, the end to the policy of appeasement and the enforcement of stronger sanctions.
In reaction, the mullahs have stepped up their suppression at home and terrorism abroad. By resorting to terrorism, they seek to blackmail the international community. They refuse to reduce their missile program and instead, continue to expand their terrorist activities.

Take a look at the mullahs’ terrorist plots against the Iranian Resistance over the past few months.
In March, they intended to launch a mass killing in the PMOI’s Nowruz gathering in Albania. In August, the regime’s spies who were gleaning intelligence and preparing for terrorism against the Iranian Resistance in the U.S. were arrested. In September, the headquarters of the Iranian Kurdish parties in Iraq were attacked by rockets, leaving dozens killed or wounded.

The regime’s diplomats are systematically engaged in terrorism and espionage. In reality, terrorism is a key instrument for advancing their foreign policy.
The decisions for terrorist operations are made at the National Supreme Security Council presided by Hassan Rouhani, and subsequently approved by Khamenei.

There is a division of labor in this regard among different institutions of the regime. The Ministry of Intelligence and Security (MOIS) and the Quds Force are tasked with implementing the terrorist schemes.
The Ministry of Foreign Affairs is responsible for two crucial duties, providing the logistics and covering up the terrorist operations.

The mullahs and their lobbies endeavor to insinuate the theory that, first, the terrorist operations are carried out by arbitrary elements, and second, they are done by some internal factions seeking to sabotage what Rouhani and Zarif do.
These lies, however, can deceive only those who are inclined to be deceived so that they could continue their relations with the mullahs’ theocratic regime.

Fortunately, the joint statement by France’s ministers of interior, finance and foreign affairs, issued on October 2 in response to the regime’s terrorist plot against the gathering of the Iranian Resistance as well as “a long, meticulous and detailed investigation by (the French intelligence) services” proved that the mullahs’ Ministry of Intelligence and Security (MOIS) was behind the scheme.

This foiled the efforts by the mullahs and their agents to attribute the terrorist act to some fictitious circles within the regime in a bid to whitewash the hands of Khamenei, Rouhani, and Zarif in this regard.

It is no longer possible for Rouhani and Zarif to attribute the bombing to its victims, as if they were not part of the religious fascist regime in Tehran and not responsible for the state-sponsored terrorism.

The mullahs have repeatedly announced that they can achieve victory through terror. As a result, imposing silence on western governments has been a significant achievement for them. Remaining silent vis-à-vis terrorism is the most damaging form of appeasement of the mullahs’ theocratic regime. Unfortunately, this is currently the prevalent policy in Europe.

On behalf of the Iranian people, I would like to address the governments of Europe and say:
Be firm against the mullahs;
Make public the dossiers on their terrorist activities;
Close down the regime’s embassies and other centers of espionage and terrorism;
Do not deal with the companies owned or affiliated with the Revolutionary Guard Corps (IRGC) and Khamenei’s executive staff. Every deal with these institutions contributes to funding terrorism;
Speak out against executions and torture of political prisoners and grave human rights violations in Iran;
And prosecute the perpetrators of crimes against humanity for the past 40 years in Iran.
And to prevent the Iranian regime’s terrorism in European countries, the EU declaration of April 29, 1997, must be enforced in dealing with the MOIS intelligence personnel and agents. The EU declaration calls for:
– the suspension of official bilateral Ministerial visits to or from Iran under the present circumstances;
– confirmation of the established policy of European Union Member States not to supply arms to Iran;
– cooperation to ensure that visas are not granted to Iranians with intelligence and security functions;
– concertation in excluding Iranian intelligence personnel from European Union Member States.