Maryam Rajavi: The ruling today by the Court of Appeals in Antwerp is the decisive defeat of the clerical regime 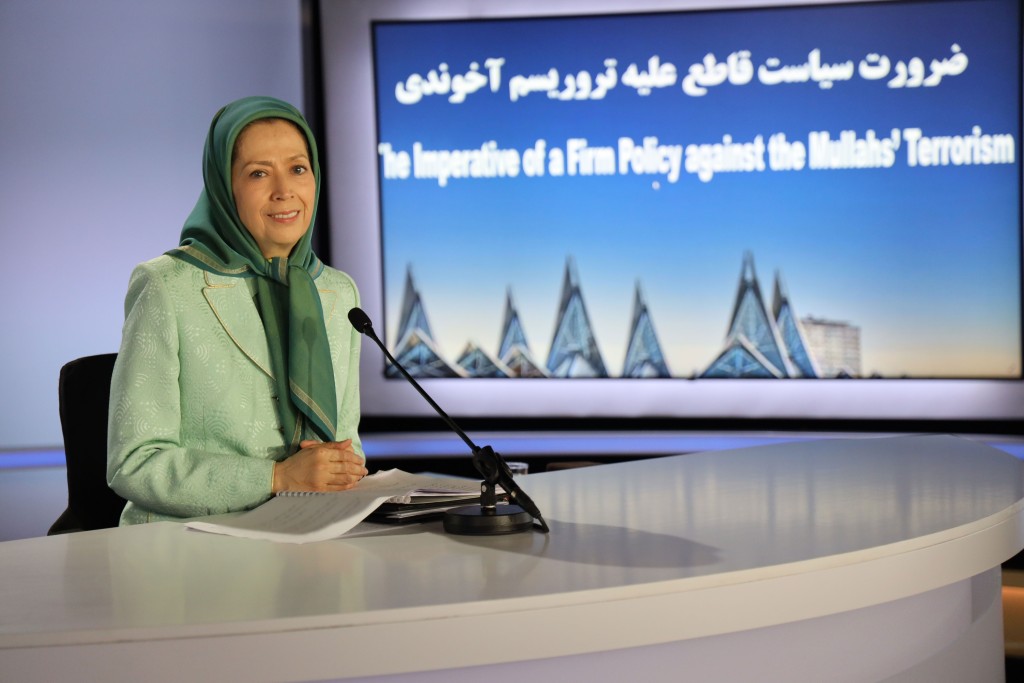 Speech to the conference, “The Imperative of a Firm policy against the mullahs’ terrorism”

The Appeals Court of Antwerp, Belgium, announced its final verdict on Tuesday, May 10, 2022, regarding the clerical regime’s terrorist plot to bomb the 2018 annual Free Iran gathering of the Iranian Resistance in Villepinte, Paris. Following the announcement, a virtual conference was held connected with Ashraf-3, the seat of members of the opposition PMOI/MEK in Albania. The conference featured various international dignitaries and private plaintiffs, some of whom addressed the meeting.
In her remarks to the conference, Maryam Rajavi noted the ruling of the Court of Appeals in Antwerp, describing it as the decisive defeat of the clerical regime in evading legal condemnation. She said in her remarks:

Dear compatriots,
Dear friends, lawyers, and eminent personalities,
Supporters of the Iranian Resistance,
The ruling today by the Court of Appeals in Antwerp is the decisive defeat of the clerical regime. Congratulations on this great victory of the Iranian people and Resistance versus the mullahs’ Intelligence Ministry, Judiciary, and the entirety of the terrorist and religious dictatorship ruling Iran. Congratulations to the people of Iran, the People’s Mojahedin of Iran, the National Council of Resistance of Iran and Massoud Rajavi, the Leader of the Iranian Resistance!
The 20-year sentence for the clerical regime’s diplomat terrorist Assadollah Assadi had already been upheld.
The new ruling by the Court of Appeals added three years to the sentences of two of the regime’s mercenaries, increasing them to 18 years, and sentenced the third one to 17 years in prison. Their citizenships were revoked permanently and their passports repealed. Each of them were also ordered to pay 60,000 Euros in cash.
Therefore, the Iranian regime failed in its 46-month attempt to escape a heavy judicial sentence for its terrorist plot against the Iranian people’s Resistance.
It is also the failure of Khamenei, Rouhani, and Raisi, who wanted to turn terrorist operations into their absolute right by manipulating diplomatic immunity. The Belgian Judiciary, however, said no to such unbelievable impudence.
Now is the time for Western governments and the world to say no to the regime in its entirety. And they must recognize the Iranian people’s right to freedom and overthrow the clerical regime.

In my 7-hour testimony in November 2019, I explained the manner in which the regime’s leaders had decided on this bombing plot in the mullahs’ Supreme Security Council. I said that the Intelligence Ministry was tasked to carry out this mission in cooperation with the Foreign Ministry.
And today, I emphasize that the prosecution and punishment of the operatives are necessary but not enough. The masterminds and main culprits, namely Ali Khamenei, his president, incumbent ministers of intelligence and foreign affairs, and other leaders of the ruling fascism sitting in the Supreme Security Council, must face justice without any exceptions. Otherwise, they will become emboldened.
Over the past four decades, they have committed countless terrorist crimes. They massacred 1,500 youths during the November 2019 uprising, carried out the political executions of 120,000, including the massacre of 30,000 political prisoners, and looted the Iranian people’s wealth and property. Today, as usual, they are trying to take hostages and make deals, but they must receive a decisive response: they must be referred to the UN Security Council, the International Court, and the Iranian people’s court in a free Iran.

Dear friends,
Anyone who wants to understand the depth of the regime’s hostility towards humanity, in general, must examine the dossier of this terrorist plot. It was a scheme designed for a large-scale massacre.
The court’s ruling and the several years of investigations do not leave any doubts that the bombing plot could become the deadliest terrorist incident in Europe.
By carrying out this plan, the highest level of the regime’s leadership, namely Ali Khamenei, wanted to compel the world to let him continue his rotten rule.

The question is, why did the regime hatch a plot that carried such high political risks? What exactly was the regime’s political calculation?
The answer is:
First, the mullahs see themselves in a position of being overthrown. Therefore, they are embarking on insane ventures. Khamenei knows better than anyone how rotten his regime is. So, he fears the regime’s democratic alternative –the National Council of Resistance of Iran (NCRI) and the People’s Mojahedin Organization of Iran (PMOI/MEK)—more than ever.
Second, the mullahs are encouraged by Western governments’ policy of appeasement.

Dear friends,
For more than three decades, the appeasement policy has served as a political refuge for the Iranian regime’s terrorism.
Therefore, one should not ask the bloodthirsty tyranny in Iran what the red lines are for its terrorist operations outside Iran! Instead, one should ask those who have remained silent and passive in the face of this regime what their red lines are?
Since the nuclear deal with the P5+1 in 2015, the mullahs’ regime has accelerated with a bang in the ballistic missiles and atomic fields, hostility in the Middle East region, and terrorism.
Specifically, in the case of terrorism, the regime, which had previously kept a low profile after the Mykonos court ruling in Germany in 1997, launched dozens of terrorist acts partly in the U.S. and Europe since the JCPOA agreement. This is in addition to what it has done in Iraq, Syria, and Yemen.
The extensive investigations for several years into the terrorist plot in Villepinte provide detailed information and understanding about the failed operation. As a result, no one can promote the illusion that the regime’s terrorist operations outside its borders are the work of isolated rogue elements acting arbitrarily.

Like repression, all the regime’s internal factions have reached a consensus over terrorism. The regime’s former president and his government were involved in endorsing all the terrorist crimes in the mullahs’ Supreme Security Council.
The regime’s former Foreign Minister explicitly said that the structure of the mullahs’ Foreign Ministry and embassies are designed to serve the intelligence services. Everyone knows that he received his orders from [former Quds Force Commander] Qassem Soleimani.
Now that Khamenei has completely ousted that faction, all power in the regime is consolidated. Its Foreign Minister is a lackey of the terrorist Quds Force.
In other words, the regime’s foreign policy serves its terrorism, and the regime’s terrorism is a tool for advancing its foreign policy. Moreover, no one can argue that there is still hope for the regime to change its policy or behavior.
No one can doubt the Iranian Resistance’s position that the clerical regime depends on terrorism and cannot give it up even for a single day. As Massoud [Rajavi, the Leader of the Iranian Resistance] reiterated, “From the outset, warmongering and export of fundamentalism and terrorism have served as a protective shield for the Velayat-e Faqih regime, and the regime needs them to survive.” 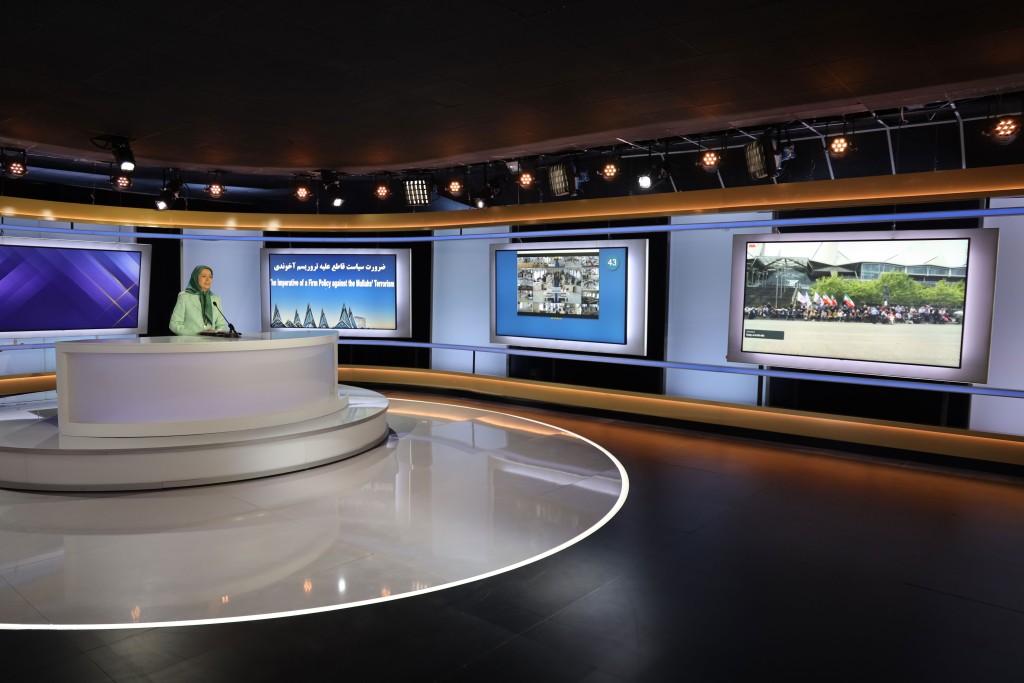 Appeasing the mullahs or siding with the Iranian people?

Indeed, appeasing the clerical regime has lost its justifications more than ever before.
Indeed, what must happen for them to end their silence and inaction?
We tell them this: Do not look at Iran through the prism of a handful of mullahs and criminal thieves who are members of the IRGC, sitting in their ivory towers. The Iranian people’s uprising and growing resistance are waiting in the wings.
Investments in the clerical regime are against the interests of peace and tranquility in the Middle East and the world. They are against the interests of the Iranian people.
Do not tie Europe’s fate to the terrorist mullahs. Instead, stand beside the Iranian people and their struggle to overthrow the regime and establish peace and freedom.
Abandon politics that ignores human rights and leave complacency to the shameful section of the Museum of History. The future generations will learn from it as a path never to be followed.
Do not let Khamenei and the IRGC have access to any money. Every barrel of oil bought from this regime and every dollar given to the mullahs turns into a bullet fired at defenseless and unarmed protesters.

These days, the brave protesters have risen up in various cities of Khuzestan province against the high price of bread and the several-fold increase in the cost of the most basic staples. In fact, they have targeted the regime in its entirety. Hail to these courageous compatriots!
The ruling by the Court of Antwerp must be a breakthrough and a stepping stone to starting a full-fledged policy of firmness and decisiveness against the clerical regime’s unbridled terrorism. Authorities in Europe know this but do nothing about it.

Now that the verdict condemning the regime’s terrorist diplomat and his three accomplices is finalized, any delay in adopting a decisive policy will encourage Iran’s ruling religious fascism to continue and escalate its terrorist activities. It is a grave mistake to justify inaction and passivity regarding the human rights abuses and crimes the regime commits in Iran and abroad with the excuse of ongoing nuclear talks. It will send a message of weakness and encourage the regime to acquire the atomic bomb.
The time has come for various countries, particularly in Europe and the U.S., to end their silence and inaction over dozens of terrorist operations carried out by the clerical regime.
They must launch legal investigations into every single one of them.
They must disclose all the information and documents of the case and all the names contained in Assadollah Assadi’s notebooks.
European intelligence services must uncover other dormant cells of the mullahs’ MOIS and the terrorist Quds Force.
They must close down the regime’s embassies, which are its centers of espionage and terrorism.
They should make their political and economic relations with the regime conditional on stopping executions and exporting terrorism.
They should designate the Islamic Revolutionary Guard Corps (IRGC) and the mullahs’ Ministry of Intelligence (MOIS) in their entirety as terrorist entities. And they should prosecute their agents, revoke their citizenship, and deport them.

Repression, killing, and terrorism cannot stop a nation determined to liberate itself

Dear friends,
Repression, killing, and terrorism have never been, nor will they ever be able to destroy a nation determined to liberate itself. The Iranian people and their Resistance are resolved to overthrow religious fascism, and they will undoubtedly do so.
I want to extend our sincere gratitude to the eminent political dignitaries and the prominent lawmakers in Europe and the U.S. They played a significant role in this case by participating as plaintiffs.
I want to conclude my remarks with warm greetings to my compatriots and supporters of the Iranian Resistance. After the arrest of the regime’s terrorists and in the course of their trials, Resistance supporters held numerous rallies and demonstrations urging the world to take decisive action against the regime and thereby blocked all paths to dealings behind the scenes.
And the final word is this: The mullahs will not find a way out through repression, terrorism, and conspiracies. The uprisings in Iran, the courageous Resistance Units, and the Army of Freedom hold the key to victory and freedom. No doubt, they will end the clerical regime’s rule.
I thank you all. 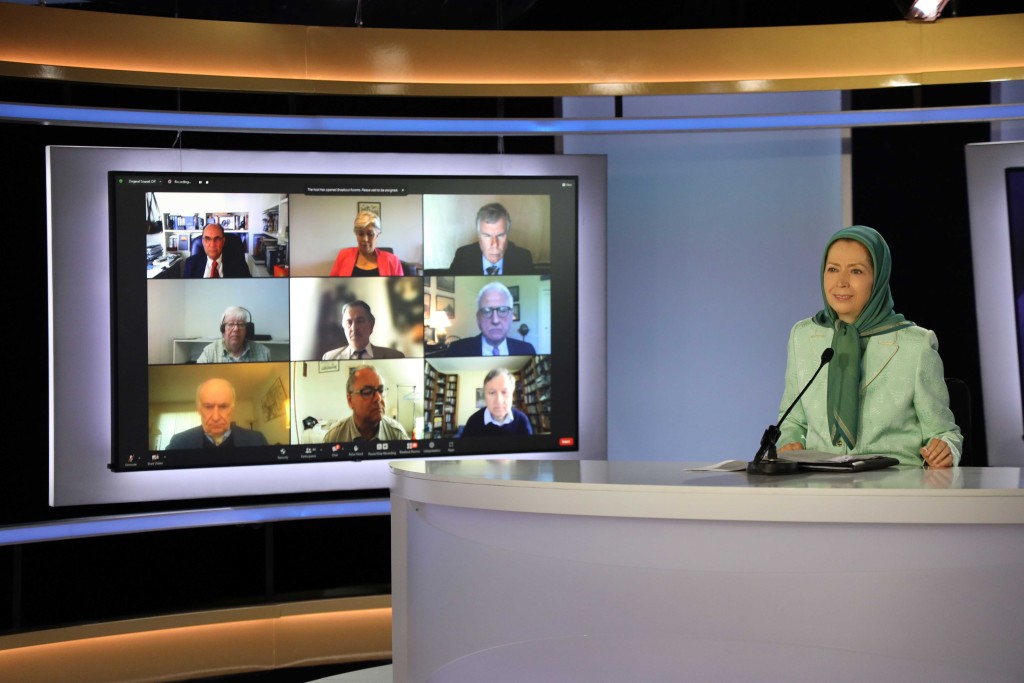