Maryam Rajavi: The facilities of the army and the IRGC should be made available to the people to save the flood victims 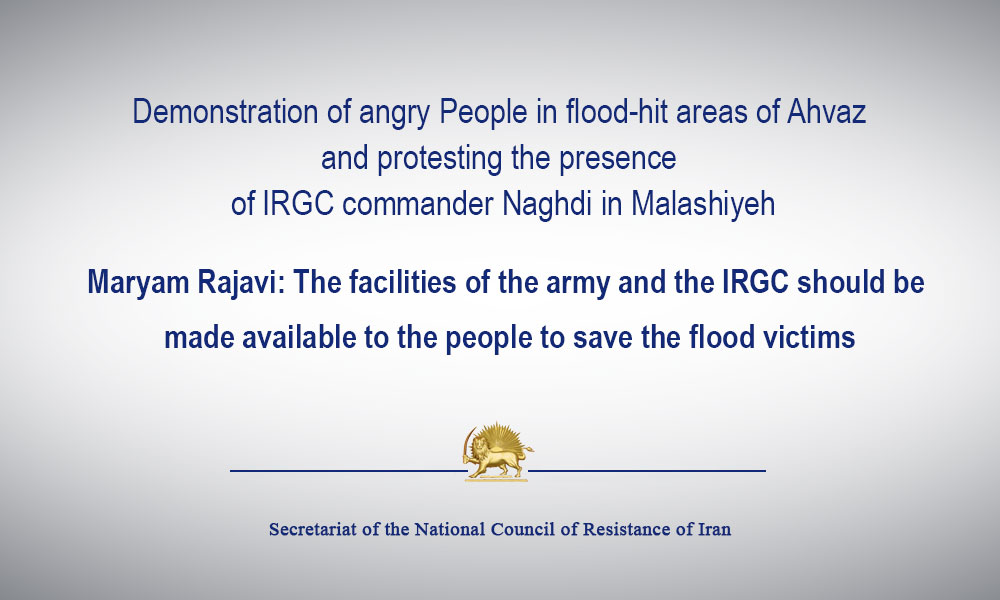 People also chanted “Khuzestan has submerged in water, the authorities are sleeping!” Mohammad Reza Naghdi is the social and cultural deputy of the Revolutionary Guard Corps (IRGC), the former head of the Basij and one of the most criminal IRGC commanders.

Friday evening, April 12, people of Shelang Abad, Ahvaz, demonstrated against the regime’s ineffectiveness in supplying services to flood victims, as well as opening floodplains to agricultural land and residential houses.
In the afternoon, people in the Ein Do (Seyed-Karim) in the west of Ahvaz city rallied in protest against the lack of directing water to marshes and the lack of facilities to build flood barriers. They chanted “This land has brave men nobody dares to get close to them,” and they “wanted us to be humiliated but we didn’t.”

Demonstrations of people to protest the clerical regime are still continuing at night in some parts of Ahvaz.
Maryam Rajavi saluted the young and brave people of Ahvaz saying that the regime should immediately address the demands of the Ahvaz people. “The facilities of the army, the IRGC and government agencies, engineering machinery, naval boats, supply depots, shelters and barracks must be provided to the people to be used to prevent floods, protect people’s lives, save the flood victims, and to temporarily resettle them.”

Secretariat of the National Council of Resistance of Iran
April 12, 2019