Maryam Rajavi: The ruling theocracy in Iran is the enemy of humanity. It is not deserving of representing the Iranian people at the United Nations 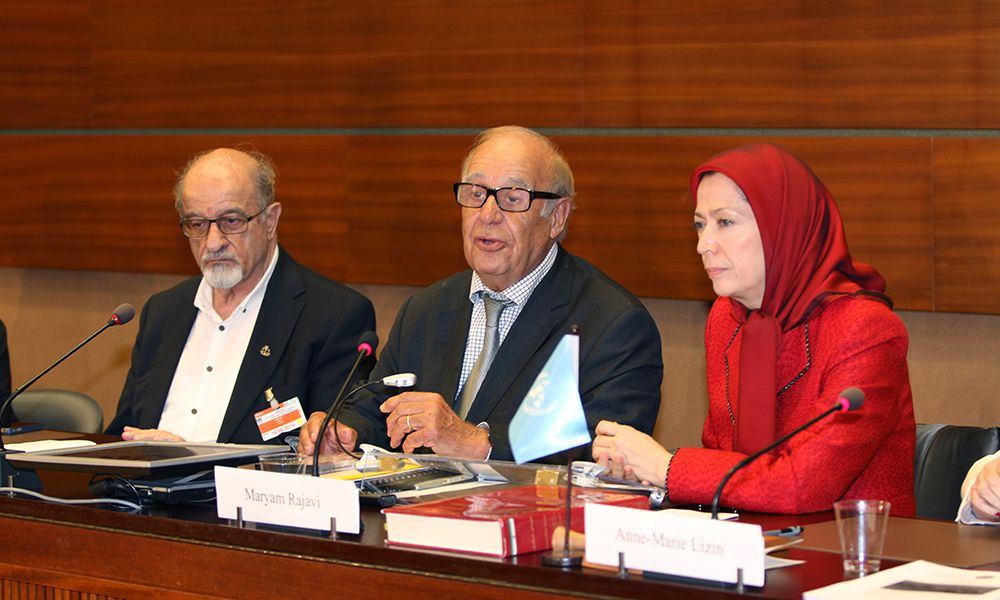 The Preamble to the Universal Declaration of Human Rights underscores “the inherent dignity and the equal and inalienable rights of all members of the human family”.
Yet, looking at what is happening in today’s world, in particular glancing at the situation of human rights in Iran and throughout the Middle East, we see an enormous gap between the current situation and the provisions of this Declaration.

In Iran, daily executions are the hallmark of the ruling theocracy’s unremitting and suppressive onslaught against the Iranian people. In the conflict in Gaza, around 2,000 defenseless children, women and men have been murdered as a result of inhumane attacks. And in Syria and Iraq, the carnage continues unabated.

So, the question is: where is the United Nations in the midst of these daily violations and the metaphorical beheading of the angel of human rights? Or, what role, if any, HAS the UN PLAYED?

From 1994 to 2004, in 15 years, there were three massacres and genocides in Rwanda, Srebrenica and Sri Lanka. Several years after these horrific crimes, UN Secretary Generals apologized for these tragedies. It is regrettable indeed that such calamities still occur.

In the past three years alone, the UN has seriously failed to fulfill its responsibilities vis-à-vis the humanitarian catastrophe in Syria, the disaster in Iraq and the repeated massacres at Camps Ashraf and Liberty.

The number of people Bashar Assad and Khamenei have murdered in Syria is about 200,000; that is 25 times the number of victims in Srebrenica.

Over the last eight years, under the command of the Iranian regime’s terrorist Qods Force, the mullahs’ puppet regime in Iraq stayed in power through the shedding of blood and efforts to eliminate and exterminate the Sunnis. By resorting to mass murder and bombings, it tried to resist the widespread revolution of the Iraqi tribes and people, who were seeking a non-sectarian and democratic system of government.

On the other hand, the conditions created by the mullahs’ regime and its puppet government in Iraq have favored and empowered an extremist terrorist group to divert the Iraqi people’s revolution and to massacre the innocent and minorities while violating the honor and dignity of women. It has, through aggression and forced migration, crushed Iraq’s Christian and Yizidi communities.

These events scar the conscience of all dignified human beings. And will provoke outrage of those who believe in genuine Islam.

Surprisingly, however, the UN’s official mandate was to support the Iraqi government and its consolidation of power.

The United Nations has also blatantly failed when it comes to the Ashraf and Liberty dossiers because it neglected its duty to prevent the three massacres that occurred at Camp Ashraf. It collaborated with the Iraqi government on the forcible displacement of the residents of Ashraf; it remained silent when the Iraqi government turned Camp Liberty into a prison as well as cruel restrictions on food and medicines; and it refrained from conducting an investigation into the Iraqi government’s September 1 massacre of 52 members of the Mojahedin at Camp Ashraf.

As a result, the very ideals of the UN are being sent to the altar.

To end this situation, this regime must not be allowed to exploit its UN membership to gain legitimacy for its illegitimate rule.

Now, I would like to refer to a painful tragedy, to which the United Nations and the Security Council have never reacted, neither at the time of its occurrence nor in the years and decades that followed.

In fact, the massacre of political prisoners in Iran serves to characterize the velayat-e faqih regime as a criminal state.

What is more, over the past 26 years, all factions of the regime have supported the massacre.

Indeed, a member of Rouhani’s cabinet, Justice Minister Mostafa Pourmohammadi, was himself a member of the death commission which issued the death sentences for people who were later slaughtered.

Even when the UN Human Rights Commission obtained the necessary documentation and evidence, it failed to hold the regime to account. And its successor, the Human Rights Council, has done nothing either.

On the anniversary of this tragedy, I want to hail all the heroes and heroines.

Mothers such as Sadat Hosseini from Jahrom; fathers like Amir Houshang Hadikhanlou from Orumieh; political prisoners who had been imprisoned before during the time of the Shah, like Ashraf Ahmadi;

Specialist physicians, such as Dr. Tayyebinejad and Dr. Firouz Saremi;

I also want to pay homage to a brave woman, who symbolized those innocent victims: Monireh Rajavi.

Monireh was a member of Amnesty International and only 38 years old when she was executed. Her two children, 3 and 5 years old, were in prison with her. She was initially sentenced to three years in prison. But, they held her in prison and finally hanged her.

Her only crime was that she was the sister of Massoud Rajavi, the Iranian Resistance’s Leader.

I said at the outset that the mullah regime’s identity is intertwined with this dossier. I must now say that this event also exhibits the identity of the Iranian people’s Resistance as well. Because a people who have waged resistance, and are willing to pay the ultimate price, will ultimately achieve their freedom.

That said, this dossier is a part of the UN’s inexplicable failures.

If it were not for the UN’s 26-year silence vis-à-vis the massacre of political prisoners in Iran, the mullahs could not have perpetrated such heinous crimes as the September 1 massacre at Camp Ashraf.

We call on the United Nations to take a stand against crimes against humanity committed by the Iranian regime. In this regard we demand the referral of the dossier of massacre of political prisoners in 1988 to the Security Council of the United Nations and judgment and punishment of those responsible.

It was exactly a year ago when Hassan Rouhani took office as the President of the ruling religious dictatorship in Iran. We all recall that his most important promise was “moderation.”

Now, as we witness that during the so-called phase of moderation, the regime has hanged more people, muzzled more voices and broken more pens than any other year, we come across an important reality: the regime is in its final phase.

Such executions and arrests signify the mullahs’ desperate reaction to a danger that threatens their very existence.

Every single day this year, more of our people have lost their lives by the hangman’s noose. This is the story of unabated hangings in one year; statistics can never truly express the magnitude of the catastrophe.

In most days, two, and in some days three people have been hanged.

Last week, in the course of only six short days, 36 people were hanged in different Iranian cities. In one instance, a mother and her son were both hanged in the city of Zahedan.

Meanwhile, thousands more are on death row in prisons across Iran.

Pressures against religious and ethnic minorities have intensified.

Dozens of journalists and webloggers have been arrested.

A large number of political prisoners, including Gholamreza Khosravi, were hanged.

The brutal attacks on the organized opposition on September 1 led to the massacre of 52 members of the Mojahedin residing at Camp Ashraf. Seven more were taken hostage.

In reality, pinning hope on change from within the religious dictatorship is a mirage.

All those within this regime inevitably defend its evil spirit, which is defined by suppression and murder.

As such, we call on the world community:

To not tolerate the regime’s human rights abuses. Do not abandon the issue of human rights during nuclear talks.

And to not delay the referral of the regime’s human rights dossier to the UN Security Council any longer.

Has this regime not executed more people per capita than any other state in the world?

Has the UN Special Rapporteur on Human Rights in Iran not said that 60 percent of women prisoners and 23 percent of men prisoners have been assaulted while in captivity?

Such a regime who suppress its own people is not deserving of representing Iran at the United Nations.

The Iranian regime is the most formidable enemy of human rights in the world today. It sheds the blood of innocent people every single day, not only in Iran but throughout the Middle East.

The UN mandate would find meaning only if and when it shuns the enemy of humanity, namely the ruling theocracy in Iran. Otherwise, the UN would be an affront to the ideal of human rights.

For years, the ruling mullahs have instituted suppression and human rights abuses both in Iran and other regional countries, especially Iraq and Syria.

In recent days, the reviled Prime Minister, who for years was engaged in committing murder and other crimes, including three massacres against members of the Iranian Resistance at the behest of the Iranian regime, has been removed from power.

This represents an irremediable strategic defeat for the mullahs and the squandering of their eight-year investments in that country. I hope that through the efforts of the Iraqi people and freedom-seekers, this development would lead to the total eviction of the Iranian regime from Iraq.

In reality, in the current circumstances in Iraq, the residents of Camp Liberty are still in peril.

I emphasize that until the last of Liberty resident has left Iraq for Europe or America, the United States and the UN bear the responsibility for the protection of the residents of Camp Liberty consistent with their repeated and written commitments.

At a minimum, the US must prevent the Iraqi government from launching any attacks against the residents of Liberty. It must compel it to release the seven Ashraf hostages. It must guarantee the security of Camp Liberty and an end to the inhumane siege.

At the same time, given Iraq’s current situation, the UN must station UN observers and a Blue Helmet unit at Camp Liberty.

I conclude my remarks by hailing Prof. Kazem Rajavi, the great martyr for the cause of human rights in Iran. He was assassinated in 1990 in this very city, Geneva, by agents dispatched from Tehran.

Kazem and other heroes, who, in his own words, wrote the history of human rights with their blood, are symbols of a resistance movement that is fighting for a world, which according to the Universal Declaration of Human Rights, would answer to the “highest aspiration of the common people, where human beings shall enjoy freedom of speech and belief and freedom from fear and want.”