Maryam Rajavi: No to the Death Penalty, No to the Religious Dictatorship in Iran 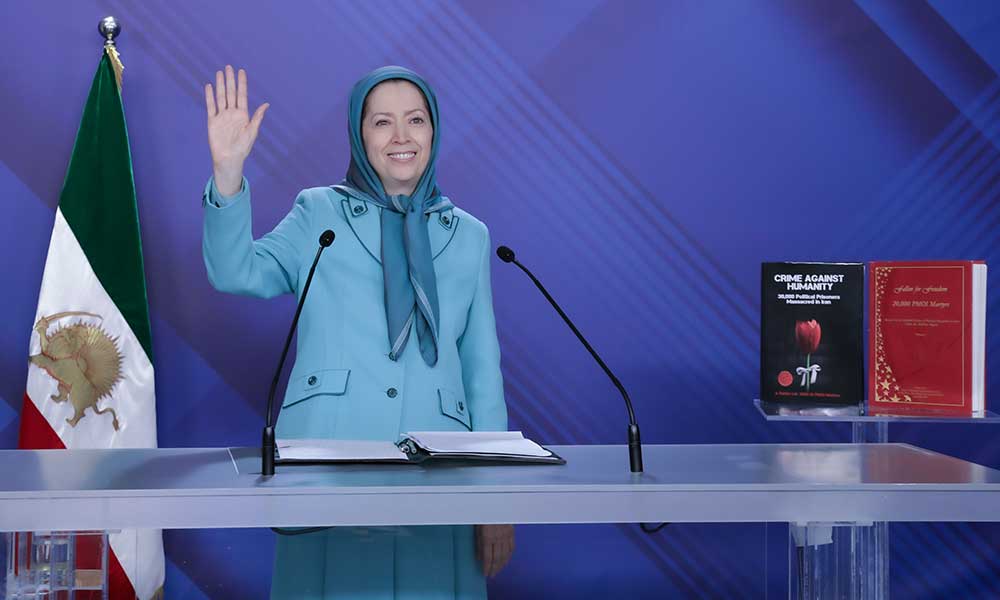 Compatriots,
Courageous supporters of the Iranian Resistance,
Honorable lawmakers,
I salute each and every one of you, the steadfast and determined supporters of the Iranian Resistance for continuing to seek justice for such valiant heroes as Navid Afkari and Mostafa Salehi who were executed by the clerical regime, for more than 1,500 protesters murdered in cold blood in November 2019, and for 30,000 unforgettable heroes massacred in 1988.

On the eve of the World Day Against the Death Penalty, your chants of No to the Death Penalty shames the religious fascism ruling Iran.
From the outset until the present day, the record of this regime is entwined with executions, hangings and bloodshed.

The mass killing of young Kurds in Naghadeh, Paveh and Sanandaj [in Iranian Kurdistan] in the first year Khomeini seized power; the daily executions of 100, 200, 300 and even 400 PMOI members in Evin in 1981; and the massacre of 30,000 political prisoners in 1988.
Khamenei also continued his ominous 31-year rule, with the execution or the murder of thousands of people for political opposition or participating in street protests.
All of the regime’s internal factions –the so-called reformists and principlists—are complicit in all these crimes. Some 4,300 people have been executed only during Rouhani’s tenure.

The mullahs wage unbridled vengeance towards our Arab, Kurdish and Baluch compatriots. Amnesty International says that since long ago, the regime, routinely transferred religious and ethnic minorities on death row to unknown locations and concealed the news of their execution for months and even years.
Yes, nothing like the execution of 120,000 children of the Iranian people better characterizes the mullahs’ religious dictatorship.

The most horrific crimes in the 21st Century

The World Day Against the Death Penalty challenges the world community over its policy towards the murderers ruling Iran. The embarrassing question posed to the world’s powers and governments is why they are not taking any action towards the ocean of blood flowing in Iran.
Is Khamenei’s cold-blooded murder of more than 1,500 people during the November 2019 uprising, not a crime against humanity? Is the killing of dozens of minors and teenagers not a flagrant violation of the Iranian people’s right to life? Then, why are you sitting idle?
The Iranian people’s desire is this: Form an international fact-finding mission; examine the ample documents, footages and evidence of these crimes, particularly the 1988 massacre and the November 2019 bloodbath; send the dossier on these major crimes to the UN Security Council. All elements are there for the prosecution of the bloodthirsty mullah at the helm and other leaders of the clerical regime.

Here is a list of 5,000 victims of the 1988 massacre. Here is a list of 811 names of martyrs of the November 2019 uprising compiled so far and published by the Iranian Resistance. Here is the list of names of the children and teenagers who were murdered by Khamenei during the November 2019 protests.
And these are the shocking documents on the transfer of the wounded from hospitals to prisons and torture chambers.

Investigate what happened to our people in Mahshahr, Shiraz, in cities in the south and west of Tehran, or in the impoverished suburbs of Kermanshah.
Investigate how the mullahs turned the marshes in Mahshahr into pools of blood.
Look and see. Before your eyes is one of the most horrific crimes in the 21st Century.
The clerical regime had no scruples about killing children and teenagers only 13 or 14 years old.
Nikta Esfandani, 14, killed in Tehran’s Sattar Khan Ave. Armin Qaderi, 15, killed in Dowlatabad District of Kermanshah. Mohammad Dastankhah, 15, killed in Sadra Township in Shiraz. Khaled Qazlavi, 16, killed in Khorramshahr. And Reza Neissi, 16, killed in Pastorizeh District of Ahvaz.
Indeed, for what were Mohammad, Nikta, and Armin murdered? Why were the blood of Khaled and Reza shed? They can be heard crying out, “for what sin were we killed?”

Dear compatriots,
We must not let ambivalence towards these atrocities continue as the mullahs wish.
We must not allow the execution of courageous youths in Iran become normal and routine. We must arouse global outrage against the regime for every execution.
We must not let political prisoners and dozens of combatant youths who are presently on the death row feel no one is supporting them.

Yes, they are backed by the people of Iran, the protesters, the Resistance Units and all combatants of freedom.
They are backed by every freedom loving Iranian who wants to bring to end hangings, torture and repression.
They can rely on this resistance which struggles to free Iran from tyranny and from religious and sexual enslavement.
It struggles for an Iran where the death penalty is abolished and freedom, democracy, and justice reign supreme.
Our people urge the international community to compel the clerical regime to free all detained protesters and all political prisoners.

This is what our people say to Khamenei:
You, from whose clutches blood is dripping,
Your throne will be taken down.
Your way is to massacre the people.
You butcher the people.
Arrest, enchain and kill.
You are digging your own grave by your own hands.

As the Iranian Resistance’s Leader Massoud Rajavi has said: “This is what will happen: The Army of the hungry is ready to rise up and rebel, and the courageous youth will destroy the IRGC.”
This means that despite all the executions and despite the regime’s ruthlessness, a generation that has since the uprisings of December 2017 been rebelling and protesting, will overthrow the clerical dictatorship. The pent-up anger and the compressed rage and rebellion in Iranian society will by the force of the great Army of Freedom eradicate the mullahs’ regime from the face of earth.
Our salutes to the martyrs,
Long live freedom,
Hail to all of you.