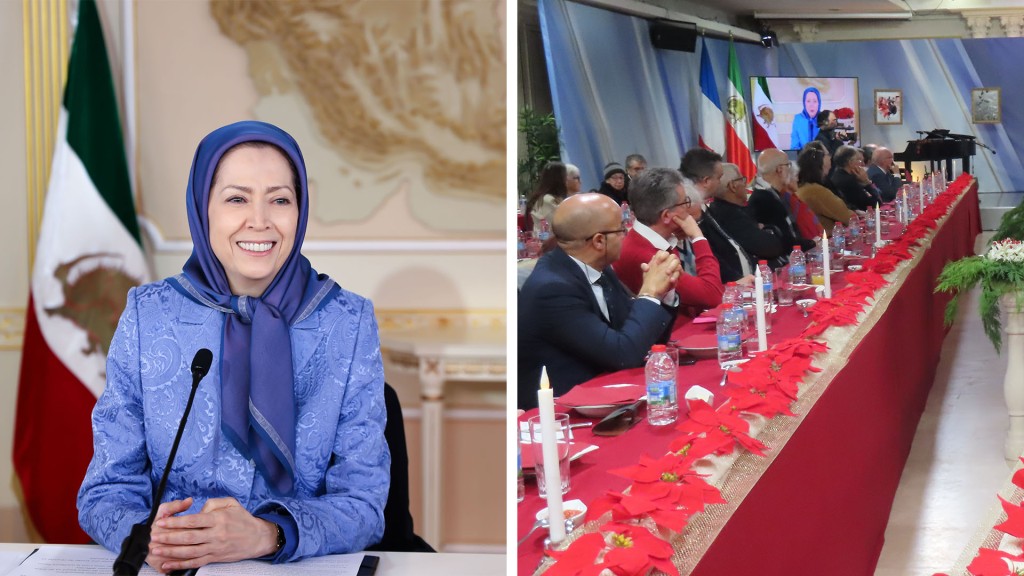 Maryam Rajavi: The mullahs tried to control the uprising, but the situation will not go back.

The honorable Mayors,
Dear neighbors and friends of the Iranian resistance in Auvers-sur-Oise, Val-d’Oise and other regions,
The end of 2022 and the beginning of 2023 coincided with the beginning of the uprisings of the Iranian people against the mullahs’ regime. You have already seen and read the video clips and news of that uprising, which is in its fourth month, and has changed the face of Iran. Everyone saw that in Iran, large majority of Iranians are staging protests. Many clearly said that this was not a protest, but a revolution and they saw how weak and isolated the regime of the Mullahs is.

Many benefited greatly from doing business with the mullahs. For this reason, they were portraying a wrong image of Iran. Many analyzes and surveys were published to conclude that Iranian people did not want change. They either said that the mullahs have a lot of popular support, or they said that the Mujahedin-e Khalq (MEK) does not have a base in Iran. The nationwide uprising proved all of them wrong.

The uprising was not spontaneous

What happened in this uprising was not sudden and spontaneous. The role of women in the fight against the mullahs has a long history. Iranian women have been actively participating in the struggle for freedom for 40 years. Moreover, women in the ranks of the Iranian Resistance have always been in positions of responsibility.
Last month, the regime’s media, especially the state television, were attacking the Iranian Resistance every day. Some time ago, the deputy of international affairs of the judiciary said that they had changed their policy regarding the MEK for some time, and that in all their meetings in Europe, the first topic of discussion is the MEK.

This uprising also proved that the people of Iran do not want a dictatorship, neither the tyranny of the Shah, nor the tyranny of the mullahs. The rejection of two dictatorships is one of the main slogans of these uprisings. We have also announced that rejecting the dictatorship of the Shah and the mullahs is the basis of cooperation among all those who want a democratic Iran.
The force that is leading the uprising relies on an extremely enrage society and is a fighting force that has progressive goals, seeks freedom, democracy, free choice and the separation of religion and state.

The mullahs have repeatedly tried to suppress the uprising in past few months. But the situation will not go back. This massive confrontation between the people and the regime will lead to the overthrow of the religious dictatorship.
What the Iranian people demand from France and the world?
Iranians expect the people of the world, especially the Europeans, to convince their governments to cut ties with the mullahs. More than ever, the mullahs benefit from Europe’s inaction.
Yesterday, the criminal clerical regime executed two youths who had participated in the protests. Unfortunately, these crimes will continue until the regime is overthrown.

Europe should announce that it recognizes the struggle of the Iranian people for regime change. European countries should close the regime’s embassies as a sign of supporting the Iranian people and condemning the torture and killing of young people. It should place the Revolutionary Guards on the terrorist list.

We all know that governments are reluctant to change their policies. Therefore, once again we call upon you dear friends and the people of France and Europe to stop the policies that harm the Iranian people’s uprising.
Thank you all; And again, I wish you a great year and I hope we can welcome you in a free Iran soon.