No to death penalty in Iran 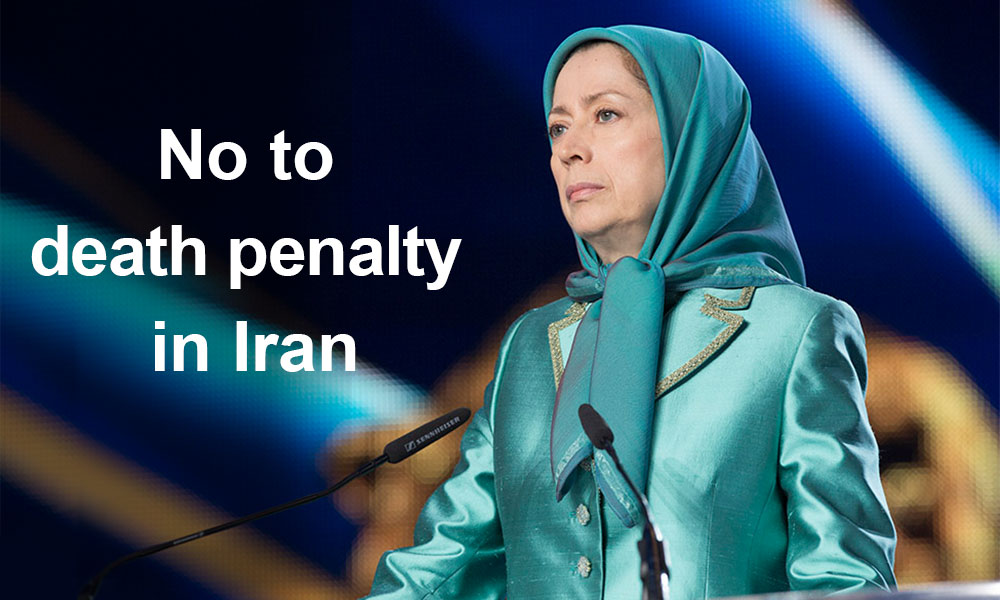 Why is the world silent when juveniles are executed in Iran?

Why is this barbaric tyranny not pressured to publish at least a complete list of names of those it executes?

Today, a large number of our defenseless countrymen are secretly executed in prisons across the country. Several thousands more are on the death row.

We think of their parents, and of their wives and children who spend nights and days under stress.
We think of the women who sell their kidneys to pay for their husbands’ blood money and save them from being executed.

Rouhani has clearly pronounced that these executions “are either based on Divine Law or on some legislation adopted by the parliament… and we only carry them out.”
Despite their differences, the ruling mullahs have a common viewpoint on executions and repression. They benefit from executions to preserve their regime.

Since three decades ago, tens of thousands of people have been executed only because of their opposition to the regime. They were accused of various unjustifiable and invalid charges without any due process of the law.

Based on the clerical regime’s penal code, anyone who is a member or supporter of the PMOI or in any way affiliated to it is considered a mohareb (someone who has waged war on God) and the punishment for a mohareb is death. The number of those who have been executed for their dissent is by no means small, and countless young people have been executed for protesting the nationwide oppression.

Islam or in the international law do not consider fighting for regime change to be a crime; it is the fundamental and inalienable right of any nation to overturn oppression and injustice.

Others are executed on drug charges. The mullahs hang a considerable number of Iran’s youths on this charge. But those executions violate the International Covenant on Civil and Political Rights. Just

The mullahs’ sole objective is to terrorize the society and stifle social protests.
They have turned homicide into a common, daily routine.
The public hanging of convicts in front of their families, and even their children, crushes their hearts, minds and conscience.

Executions, torture, stoning, amputations of limbs, and eye gouging have been institutionalized and turned into law in this regime.

Yes, the existence and rule of this regime depend on executions because if there are no more executions, there would be nothing to prevent the eruption of public fury and seething social uprisings by the people.

Without executions, how and by what means could the mullahs deny people their freedoms and instead step up suppression, intimidation and all sorts of restrictions into the most private angles of people’s lives?

Without executions, how else could the mullahs increase the prices several folds every day, squander the public’s wealth and revenues in regional wars and plunder them in a life of luxury?

Our plan is an Iran without the death penalty

Our plan for future is an Iran without the death penalty and devoid of torture. Our plan is putting an end to torture and all forms of human rights abuse in Iran.

The Iranian Resistance declared years ago that it calls for abolition of death penalty and an end to torture and all forms of rights abuses in Iran.

Our plan is to revive friendship, conciliation and tolerance.
Our plan for future is to put an end to the mullahs’ religious decrees. We reject the inhuman penal code and other abusive laws of this regime. We believe Retribution is an inhuman law.

We advocate laws that are based on forgiveness, compassion and humanity.
The Iranian Resistance Leader Massoud Rajavi ordered the release of thousands of Khomeini’s agents arrested in the battles of the National Liberation Army of Iran –many of whom had committed murder against the PMOI— without the slightest violation of their human rights.

Yes, this is an enduring tradition of the Iranian people’s resistance.
Our plan is to institute an independent, dynamic and free judiciary.
Our plan is to defend democratic values, freedom, equality and sanctity of every citizen’s private life.

No one will be arrested arbitrarily; torture is banned; no defendant is deprived of the right to defense and having a defense attorney; the principle of presumption of innocence is respected and no one, especially no woman, will be deprived of having access to justice when subjected to violence, aggression and abuse of her freedoms.

Our plan for Iran’s future is that no one should be denied his/her freedoms, rights or life because of having or not having faith in a particular religion or for abandoning it.

Our plan is for all citizens to enjoy genuine security and equal rights before the law.
Yes, we are seeking a new order based on freedom, democracy and equality.

We have chosen to persevere and fight on to let our people enjoy a life in freedom and prosperity, so that no youngster under 18 years of age would have to wait in the corridors of death in prison to reach legal age for execution; so that no mother would ever shed tears of grief for her executed child.

Our motivation for resistance till victory is not spite and revenge but our love for freedom and human rights. This is fuel sour steadfastness. And the secret to this endurance is nothing but being prepared to sacrifice and pay the price.