Speech at the Human rights commission of Parliament of Spain 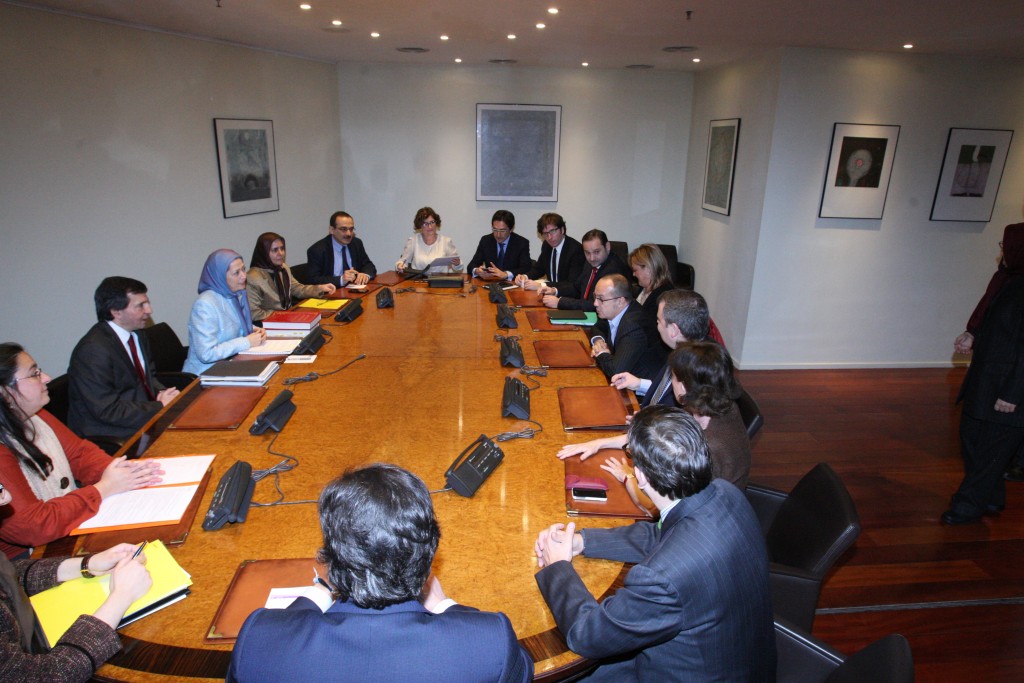 I am delighted to be present at the seat of democracy in Spain and to meet members of the Human Rights Commission.

I am grateful for your attention to the issue of human rights in Iran.
The world has always paid tribute to your nation for paying a heavy price for promoting progress and democracy.
In this respect, we share many issues.
For the past three decades, our people have been fighting against religious dictatorship.
In 1979, fundamentalists came to power in Iran by hijacking the Iranian people’s revolution.
Thus, a religious fascism based on absolute repression, misogyny, religious discrimination, deception, export of terrorism and fundamentalism took power in Iran.
From the beginning they started meddling in the Muslim world and countries of the region by warmongering, export of terrorism and fundamentalism.
In Iran, the mullahs’ regime started suppression of freedom and elimination of their opponents and in the next step they carried out the massacre of its opponents, executing 120,000 dissidents.
This book includes the names of only 20,000 of the victims.

This regime was built on the blood of members of this resistance.
It massacred 30.000 political prisoners in 1988 in order to save their fragile power from the consequences of their failure in the anti patriotic war with Iraq.
And today it has maintained its power only through terror and daily executions.
In January, Amnesty International reported that thousands are on death row in Iran.
Currently, more than one thousand are on death-row only in just one prison.
The prosecutor of Qazvin a city near Tehran said recently that the number of executions in this city in the past 20 months is equal to the past 20 years.
Through executions, the mullahs adjust the level of repression in society.
The torture and rape of prisoners is another aspect of this policy.
Last month, Sattar Beheshti, a dissident blogger, was murdered under torture and shocked the world. But this is just one example of the brutal torture leading to the death of prisoners.
In addition, the mullahs have deprived ill prisoners of medical treatment to cause their death.
Mohsen Dokmehchi, Hoda Saber, and Mansour Radpour died in the past two years because the mullahs denied them proper medical treatment.
In 2010, the Justice Minister said that 70 people were being arrested every hour.
A year later, the figure rose to 80 arrests per hour.
Last summer, the mullahs even arrested young people who had rushed to help the victims of an earthquake in Azerbaijan.
Pressuring the families of prisoners and even arresting and torturing them are also part of this tragedy.
Three weeks ago, the United Nations General Assembly’s Third Committee adopted a resolution, which demonstrated the mullahs’ hostility towards all aspects of human rights in Iran.
This is the 59th resolution about human rights by the United Nation institutions and clearly shows that year after year the violation of human rights has deteriorated.
In reality, the mullahs have declared war against the Iranian people because their regime is moving rapidly to its fall.
The decisive factor in this respect is the people’s extensive anger and discontent.
This anger which was once demonstrated in 2009 uprisings, has not decreased, on the contrary it has been increased.
Economic bankruptcy, the impact of international sanctions, the division in the regime’s rulers and its infighting, the impasse over the nuclear program, and the possibility of the overthrow of the regime’s strategic ally; the Syrian regime, have prepared the grounds for the mullahs’ overthrow.
Under these circumstances, Western governments have either remained silent or simply expressed concern.
In reality the path to stopping the mullahs’ nuclear weapons program and terrorism is to compel them to stop execution and torture in Iran.
This will pave the way for Iranian people to bring about fundamental political change.
But unfortunately, instead of doing so, western governments have blocked the road for the Iranian resistance.

Acting at the behest of the mullahs, they put the resistance movement in terror list.
This major mistake emboldened the mullahs to step up the violations of human rights in Iran and use this blacklisting as a pretext to justify the executions.
Fortunately, through a major legal campaign, the resistance succeeded in removing this terror label in Europe and the United States.
Now, we hope that this destructive mistake could be replaced by a new policy that would ensure democratic change in Iran. 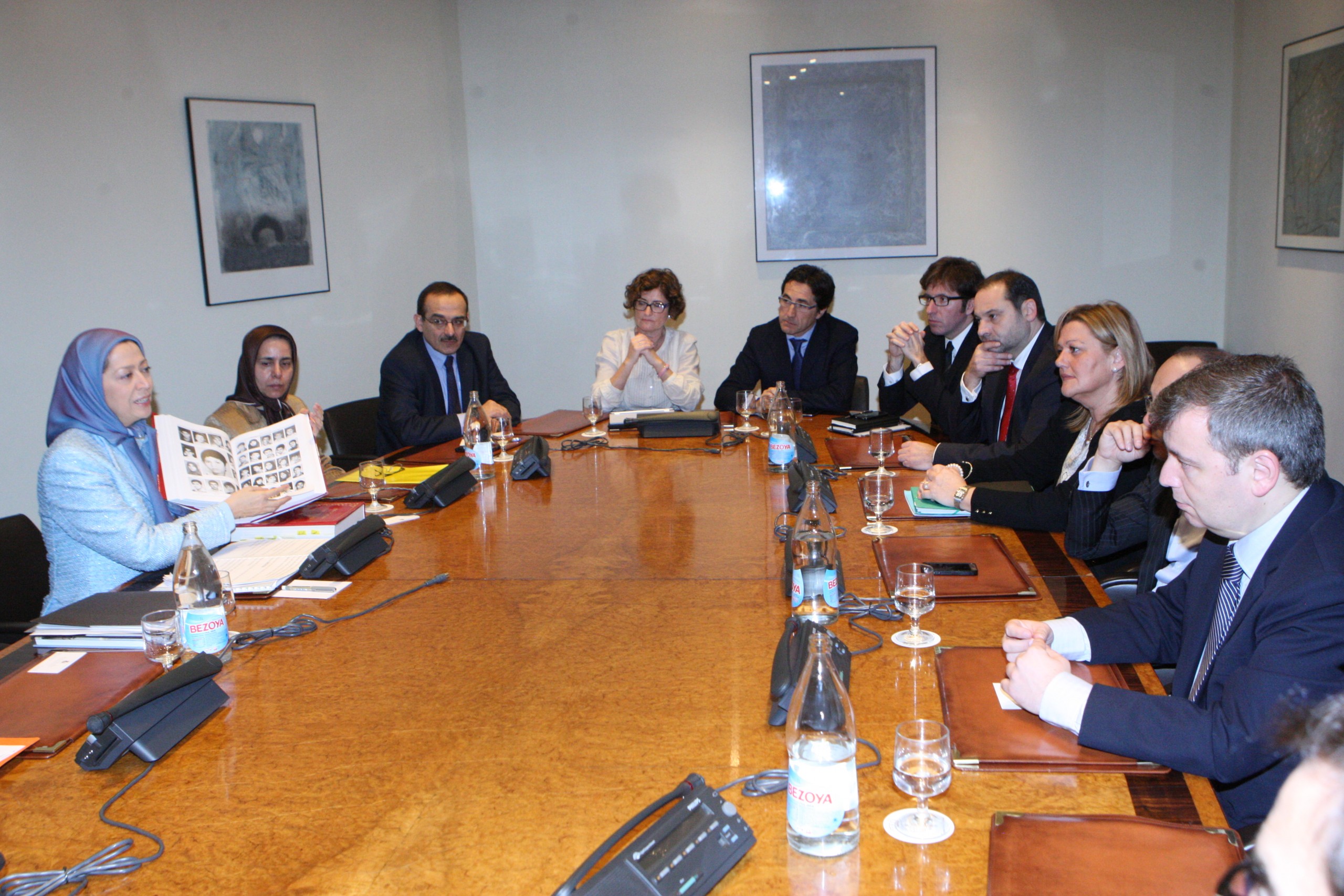 Distinguished members,
The question before us is what solution is available to deal with this regime?
A quick look at the past clarifies that western governments have tested all options:
-Critical dialogue,
-packages of incentives,
-long-term negotiations,
-blacklisting the Iranian opposition,
-ignoring the terrible human rights violations
in Iran as well as the regime’s breaches of international law and terrorism.
But these policies had only emboldened the mullahs to continue their extremism, terrorism and suppression.
In the past two years, western countries have increased international sanctions against the regime. This is a positive step.
Despite its economic situation, Spain admirably stopped purchasing oil from the mullahs.
Nevertheless, if the sanctions are not coupled with a political solution, they will not be efficient.
So, what is the solution?
Certain think that the solution is either war or the policy of appeasement.
But we are against these two solutions.
Military intervention is not a solution for the crisis of Iran.
And the policy of appeasement will also lead to a war.
The Iranian resistance is for the third option.
It is the overthrow of the mullahs by the Iranian people and Resistance.
This solution is the urgent desire of the Iranian people.
A major movement has been formed to make this desire come true.
This movement has deep roots inside Iran and an organized network outside the country.
The resistance’s units inside Iran played an important role in organizing the 2009 and 2010 uprisings.
The supporters of this movement inside Iran played a critical role in exposing the mullahs’ nuclear weapons program and terrorism.
The coalition that has been formed around this movement is a democratic alternative to the mullahs’ regime.
The National Council of Resistance of Iran (NCRI)
is composed of Iran’s different political tendencies.
More than half its members are women.
We believe in people’s sovereignty.
From our point of view, freedom of expression, belief and assembly as well as individual freedoms are vital to the advancement of society.
We believe in gender equality in political leadership.
We strongly believe in the separation of Church and State.
We will end ethnic and religious discrimination.
In tomorrow’s Iran we will abolish death penalty.
We believe in the Universal Declaration of Human Rights and other international conventions.
Our foreign policy is based on, international cooperation, respect for the United Nations Charter and relations with all countries.
And finally, we want a non-nuclear Iran.
In the past 15 years, western governments unjustly blacklisted the People’s Mojahedin, offering the biggest possible concession to the mullahs.
Thus, enchaining this movement and many of its resources in order to satisfy the mullahs
and therefore, blocked the path to change in Iran.
But by wining legal battles in 20 courts and directing a major campaign, the resistance succeeded in ending these designations.

Now after this victory, members and sympathizers of the resistance inside Iran are working to set up resistance units to advance an uprising.
This resistance holds the key to Iran’s crisis.
Opening the path for the resistance movement is the least costly and most practical path to change in Iran.
Change in Iran is the responsibility of the Iranian people.
We do not expect financial aid, arms or intervention from any country.
But we emphasize that the West must respect the Iranian people’s desire for regime change.
At this moment, I also want to share with you a deeply humanitarian, and at the same time, political issue.
Currently, more than 3,200 members of the resistance are at Camps Liberty and Ashraf in Iraq.
At the behest of the Iranian regime, they have been massacred twice by Iraqi forces.
During the past 4 years, they are suffering from an inhumane siege and psychological torture.
According to the opinion of the UN Working Group on Arbitrary Detention, Liberty is a prison.
It has even denied the residents the right to ownership by preventing them from selling their property.
This is while they are protected persons under the Fourth Geneva Convention and the UNHCR has formally recognized them as asylum-seekers with fundamental rights.
So far, a large group of residents several have been granted refugee status and the process of determination of status of others continues.
Finally allow me to summarize the necessary elements for a correct policy vis-a-vis Iran by the US, EU including Spain.
I urge you to help the Iranian people and their resistance in order to realize these goals.
1. Make political relations with the regime conditional to stopping executions and torture in Iran;
2. Refer the Iranian regime’s human rights dossier to the UN Security Council
3. Provide security and basic protection for the members of resistance in Iraq and specially ask the UN Secretary General to declare camp Liberty a refugee Camp;
We expect the Spanish government be the pioneer of defense of human rights of the Iranian people and their desire for regime change and realization of above mentioned steps in the EU.