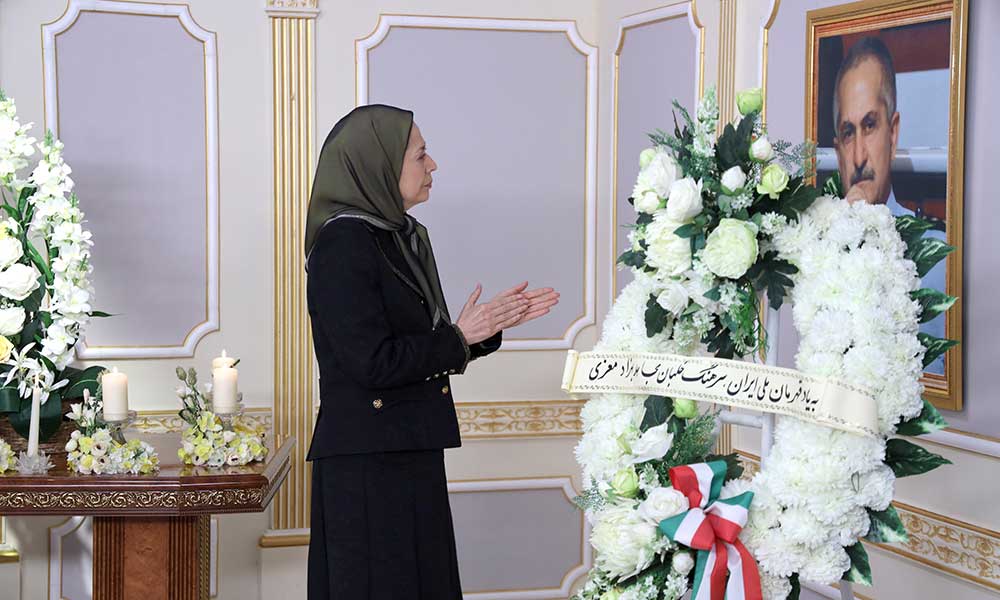 Maryam Rajavi: Col. Mo’ezzi’s admirable perseverance inspires the freedom-loving service members in the military in rising up against the clerical regime

A ceremony was held on Friday, January 15, 2021, to pay tribute to Iran’s national hero, Air Force Colonel Behzad Mo’ezzi. The virtual conference featured a speech by Maryam Rajavi and remarks by several members of the National Council of Resistance of Iran (NCRI). Members of the Council, the PMOI/MEK in Ashraf 3, Albania, and a number of supporters of the Iranian Resistance around the world also took part in the event virtually. The speakers paid homage to Colonel Mo’ezzi and honored his memory.
In her opening remarks to the conference, Maryam Rajavi said:

Greetings to dear friends and colleagues in the NCRI, to all sympathizers of the Iranian Resistance around the world, to the beloved family and friends of Col. Mo’ezzi, and to my sisters and brothers in the PMOI/MEK.
We have gathered to pay tribute to Colonel Behzad Mo’ezzi, a noble human being, a Mojahed pilot.

Col. Mo’ezzi, a national hero who led the riskiest flight, the soaring eagle in the sky of freedom and Iranian Resistance, was the most revered pilot among patriotic service members of the military in Iran’s contemporary history; the true heir to Colonel Mohammad-Taqi Khan Pessian and all patriotic service members who rose up for freedom. Mo’ezzi was a brilliant symbol of an uncompromising struggle against both the Shah and the mullahs.

He used to say that he had been born to carry out the most important mission and flight of his life. And to the last moment of his life, he was proud of having chosen the path of Massoud Rajavi, the Iranian Resistance’s Leader, and of remaining loyal to his commitment to God and to his people. We salute Colonel Mo’ezzi.
The distinguished children of the late Col. Mo’ezzi will emulate their father’s fighting spirit by soothing the pain and grief of the Iranian people.
To his son and daughter, my dear Amir and Sara, I say: I know that losing a father, like Colonel Mo’ezzi is truly difficult. But rest assured that he will live in the hearts and minds of thousands upon thousands of combatants of freedom.

Years ago, I personally heard from the Colonel who said: “In Iran, anyone who gets to know my family, treats them with kindness.” We also witnessed this truth in another form in the telethon of Iran National Television. Less than an hour after the INTV announced the passing of Col. Mo’ezzi, our compatriots contacted the INTV’s telethon one after the other and expressed their condolences to the PMOI/MEK and the people of Iran. Shortly afterwards, we saw that they paid tribute to Col. Mo’ezzi by posting his pictures on the walls and public places nationwide.

I would also like to salute and express my condolences to our dear brother, Major Hossein Eskandarian, the honorable member of the NCRI, and the co-pilot, and to Mr. Bijan Vakili, the flight engineer, the enduring friends of Col. Mo’ezzi. They always stood by his side and have joined us in this tribute.
I would also like to use this opportunity to honor the memories of the Air Force servicemen, the heroes who were executed by the murderous Khomeini because of their role in the great mission, which flew Massoud Rajavi out of Iran.

The greatest accomplishment of our beloved Colonel was his epic flight on July 29, 1981, which he called “the riskiest flight.” For obvious reasons, he knew exactly what he was doing in this very critical, extremely dangerous, and tremendously consequential mission.
Colonel Mo’ezzi volunteered for this mission. In the days following June 20, 1981, when the regime was violently slaughtering the PMOI/MEK, any form of contact with the PMOI/MEK, and any form of assistance to the organization was brutally punished even with the death penalty. So, our national hero was keenly aware what he had accepted to undertake.

Therefore, when he embarked on this path, the first price he had to pay was to put his life on the line and subsequently all his life, standing, and career.
Undoubtedly, Colonel Mo’ezzi had found who he was searching for: Massoud Rajavi. He accepted this responsibility wholeheartedly and sought to do whatever he could save Massoud’s life and safely fly him out of harm’s way.

This was his life’s mission the great objective he endeavored to reach.
When the radio aired the news of Massoud Rajavi’s departure from Tehran to Paris on July 29, 1981, everyone in the PMOI/MEK, and every freedom-loving Iranian around the world who learned of this news, was overwhelmed with hope and jubilation. At the same time, everyone attributed the success of this operation to Colonel Behzad Mo’ezzi.
In my message of condolences a few days ago, I said that I have always felt indebted to him. I had repeatedly told him in person that I will forever remain grateful to him for that great flight and that critical mission.

Everyone noticed his virtues, and his humane and popular attributes. But let me use this opportunity and point out that he had absolutely no interest in wealth, job, ambitions, , positions, and even personal affluence. In this regard, as Massoud Rajavi said, he was truly a pious dervish.

It is appropriate to recall that beyond his personal attributes, beyond his admirable humility, what set Colonel Mo’ezzi apart from others as a Mojahed and a combatant of freedom, was his decision to always remain indebted to his people and to the path and the struggle he had chosen. He, therefore, did not want anything for himself and refrained from being viewed as someone special by others.
Over the past 40 years, he lived in a small room at the NCRI headquarters (in Auvers-sur-Oise). This life mirrored his beliefs and piety. He had access to every privilege, and he was free to live as he wished even in proximity of the Resistance movement, but he chose to live among the PMOI/MEK members.

He also was arrested during the French police June 17, 2003 onslaught against the NCRI.
He was exiled to the small town of Chaumont, 250 kilometers south of Paris. He quickly became popular with people there. Twenty-five human rights and refugee associations formed a committee in support of Colonel Mo’ezzi. They wrote letters to various French agencies and institutions, including to the Élysée Palace, protesting his forced exile.

Colonel Mo’ezzi used to say that it had gotten to a point where when he would go around the town, everyone knew him and expressed sympathy with the Iranian Resistance.
Even during forced exile, he engaged in a lot of political activities to expose the shameful attack against the NCRI, which received substantial coverage in the French media. The French Channel 3 television said: “He is considered a hero in his own country, an Air Force Colonel who flew the leader of the Resistance out of Iran but is being threatened by French officials.”

Defending positions of the Iranian Resistance

Whenever he attended meetings, conferences or gatherings, to engage with Iranians and Resistance’s supporters, Colonel Mo’ezzi would defend the policies of the Resistance and the rightfulness of the struggle against the mullahs. He always spoke highly of the patriotic service members of the regular army and particularly, of the Air Force. He used to name the personnel who supported the PMOI/MEK and participated in the operation to fly Massoud Rajavi out of Iran. Some of them were Colonel Esmaeel Farkhondeh, and Air Force cadets, Reza Bozorganfard, Ali Kamalan, Ahmad Boushi, Iraj Barngi, Massoud Sadeq-nia, Yaqub Choudari, Mohammad Hossein Hosseini, Ebrahim Azizi, Alireza Massudi, and Fereydoun Varmarzyari, who was later killed during the Eternal Operation in 1988. Indeed, the admirable perseverance of Colonel Mo’ezzi and all those heroes will inspire the freedom loving personnel of the Army to rise up against the clerical regime.

The National Council of Resistance of Iran identifies itself with you, the honorable friends of Colonel Mo’ezzi; noble human beings who have resisted and stood up to the regime, adhered to their uncompromising struggle against the Shah and the mullahs, and remained faithful to their commitment until the last moment of their lives.
We salute Colonel Mo’ezzi. Hail to all of you dear friends and sisters and brothers for your forbearance and determination and to your resolve to carry on this struggle as long as it takes.

Let us all (rise up and) observe a minute of applause for this national hero, Colonel Behzad Mo’ezzi. 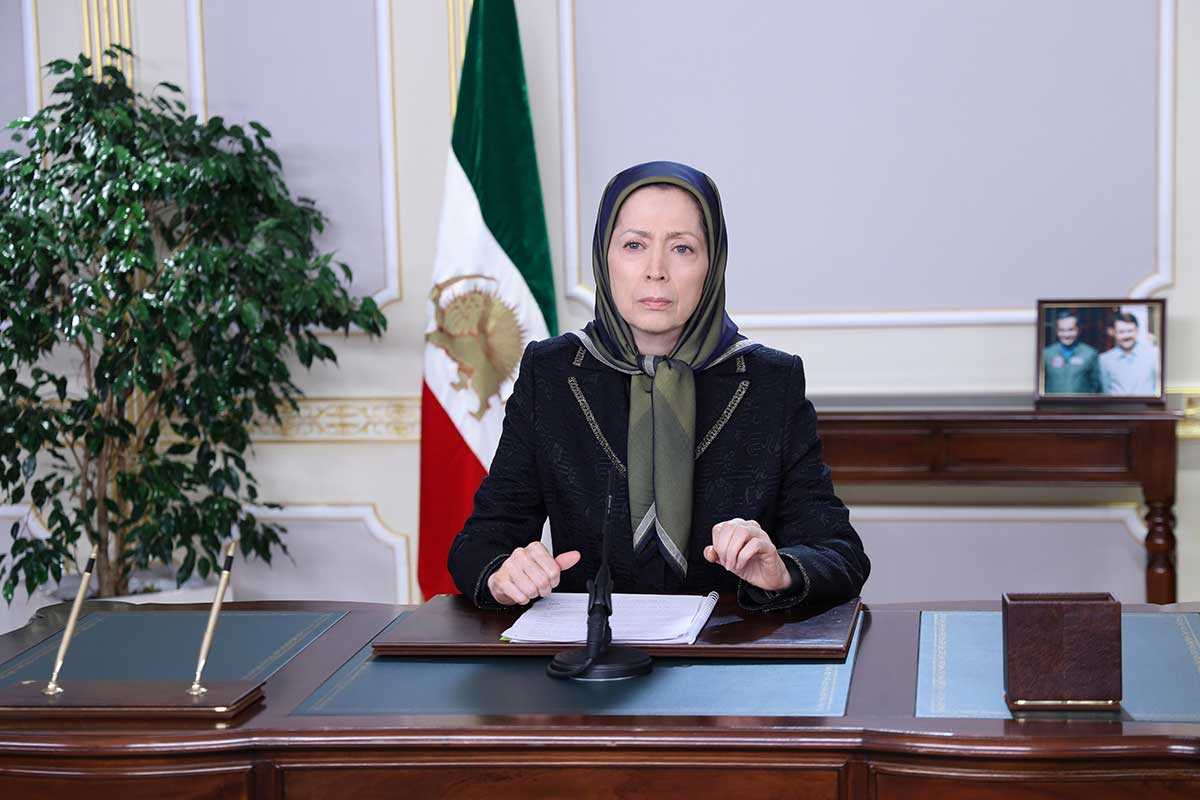