Iran: Anger and protest against repeated power outages with the chants of “Death to Khamenei, death to the dictator” 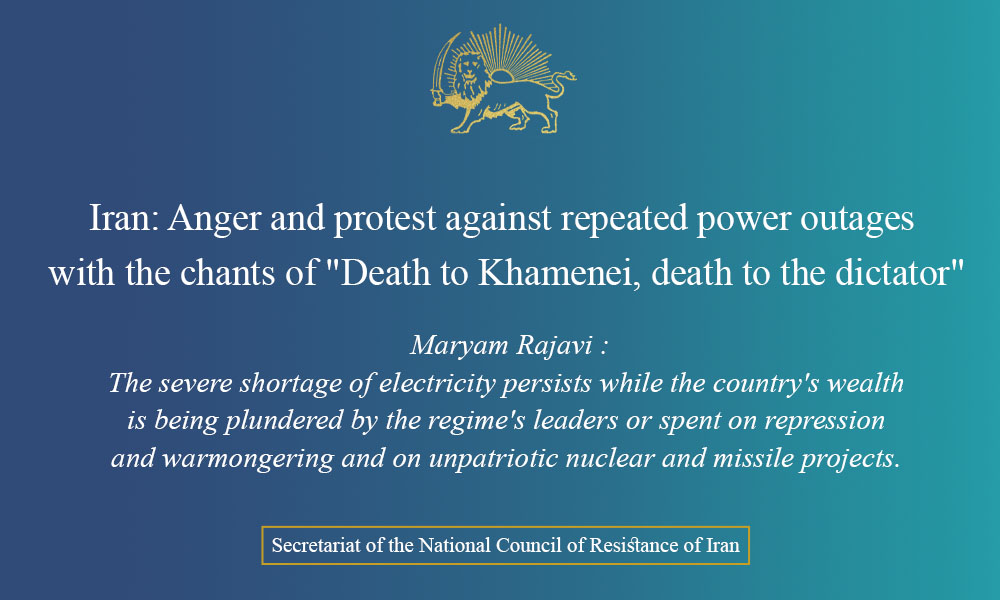 Maryam Rajavi : The severe shortage of electricity persists while the country’s wealth is being plundered by the regime’s leaders or spent on repression and warmongering and on unpatriotic nuclear and missile projects.

Last night, due to frequent power outages, people in Tehran (Tehran-Pars and Saadat-Abad districts) and many other cities such as Kazerun, Kordkuy, Gonbad Kavus, Hamedan, Pakdasht, Aq Qala, and Bushehr took to the streets chanting “death to Khamenei and death to the dictator.” In some cities, people gathered in front of the governor’s office or the power department. In Kordkuy, protesters blocked the street leading to the governor’s office. This morning, plastic industry workers in Kahrizak protested against repeated power outages and gathered inside the district power department.

Power outages across the country, ongoing for a long time, have become more widespread in the past two days. In many cities, including Tehran and Karaj, power has been cut off for hours without notice, causing many problems, especially during peak hours. With the fifth COVID-19 outbreak, which has covered large parts of Iran, the outages pose great risks to patients, particularly those in the ICU.

This morning, a spokesman for the regime’s power department announced a shortage of at least 11,000 megawatts for this season, which, he said, will lead to even more blackouts. He cited the closure of many power plants due to technical failures, a 14% increase in electricity consumption, and unauthorized bitcoins mining (which are mainly owned by the Revolutionary Guards) as reasons for the shortage of electricity, according to State Radio and Television News Agency, on July 5.

Mrs. Maryam Rajavi, the President-elect of the National Council of Resistance of Iran (NCRI), saluted the protesters who shouted “death to Khamenei, death to the dictator” and said that while our people are suffering from severe electricity shortages in the summer heat, the country’s wealth and resources are being plundered by the regime’s leaders and their corrupt families or spent on repression and warmongering and the unpatriotic nuclear and missile projects. The clerical regime is the cause of poverty, unemployment, and destruction of infrastructure. The only way to achieve freedom and justice is to overthrow this regime.

Secretariat of the National Council of Resistance of Iran (NCRI)
July 5, 2021