Maryam Rajavi: Raisi’s appointment is Khamenei’s final bid to preserve the regime and signals the end of the regime 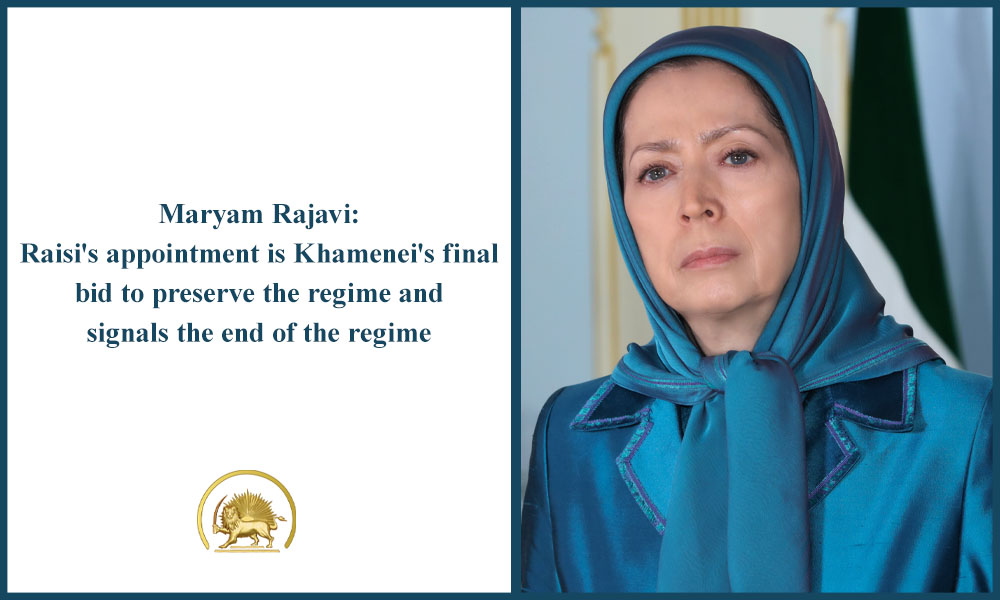 Ali Khamenei appointed Ebrahim Raisi, the henchman of 1988 and the murderer of the People’s Mojahedin (PMOI/MEK), as president in circumstances where the chants of “death to the dictator,” “Death to Khamenei,” and “death to the principle of Velayat-e-Faqih” echo from Ahvaz to Tehran, Tabriz, Mashhad, and across Iran. This is Khamenei’s final bid to preserve the regime and signals the regime’s end.

Ebrahim Raisi’s presidency put an end to any illusions about moderation or reform in this regime forever. The overwhelming boycott of the sham election last June is the flipside of the uprisings from 2017 until today, speaking to the Iranian people’s desire to overthrow the regime. This is something that Khamenei is vigorously trying to forestall by taking advantage of the Coronavirus pandemic and massive human casualties.

Today, Khamenei, and Raisi admitted to the explosive state of society by acknowledging pervasive poverty, 44% inflation, a budget deficit of 4,500,000 billion Rials, and a 680% increase in liquidity. They also confessed to widespread injustice and corruption but tried to blame everything on Hassan Rouhani and his cabinet.

In the eyes of the Iranian people, however, all the regime leaders, especially Khamenei, Raisi, and the Judiciary Chief Gholam Hossein Mohseni Eje’i, must be brought to justice for committing genocide and crimes against humanity, and for four decades of murder, plunder, and destruction of the nation’s assets and resources.

The policy of appeasing the ruling religious fascism in Iran is no longer constructive or effective. Neither this murderous regime nor maintaining relations with it enjoy any legitimacy any longer. The international community and the UN Security Council must stand with the Iranian people and Resistance and their desire to establish a democratic republic based on the universal suffrage and the separation of religion and state.