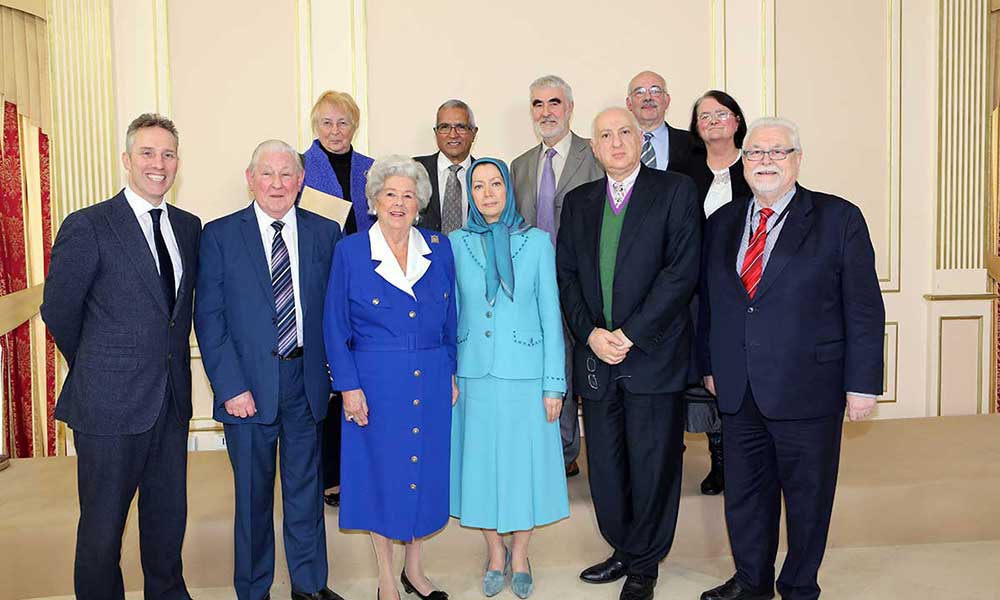 First, I would like to commend the admirable role of “you” friends of the Iranian Resistance in both Houses of Commons and Lords.

Particularly My very dear Baroness Boothroyd, who I am privileged to welcome for the first time at the house of the Iranian Resistance.

Your support for the Iranian Resistance and the Iranian women is a source of pride for all members of Resistance and of course for the British people.
You have all played a key role in the history of our movement that will be always remembered by my people.

The historic initiative of 35 British parliamentarians to file a legal challenge against the government calling for the delisting of the PMOI; your determined support for the Ashrafis; your constant condemnation of human rights violations in Iran;
and your strong opposition to making concessions to the mullahs all these, reflect your insight for the right policy on Iran and the humane values you deeply believe in.

Your tireless efforts have turned a page in the history of relations between Iran and Britain.

You provided an alternate to the British government’s official policies, which have generally been against the Iranian people.

And you did everything possible to make your alternative policy a reality and in several occasions your just policy prevailed over the official policy of appeasement.

British-Iran relations is generally associated with a long colonial relation and hostility toward the nationalist government of Dr. Mossadeq, backing of the monarchic dictatorship, making deals with the clerical regime, and lastly tagging the PMOI with the illegal terrorist label.

Instead, you recognized the right of the Iranian people to bring regime change.
And by supporting those who struggle for freedom, you opened a new chapter in these relations.

The clerical regime in Iran has major conflicting interests with the West on economic, political and cultural structures.

Still, this is a regime that has best benefited from western help more than any other regime in Iran over the past two centuries.

Just to mention a few examples:
In 2003, the United States and the United Kingdom bombed the PMOI’s camps in Iraq after reaching a deal with the mullahs’ regime.
During those bombings, recognized as War Crimes by International jurists, dozens were killed and many more were injured.

They then disarmed the PMOI and imposed extreme restrictions on them to the mullahs’ advantage.

At the same time, they opened the way for the Iranian regime’s control of Iraq.

You are also well aware of the developments around the PMOI’s delisting.
The British government was at the forefront of the terror listing of the PMOI in Europe.

The Home Secretary at the time did not hide the fact that the terror label was done at the behest of the Iranian regime.

When examining western relations with the mullahs, we reach several important conclusions:

First: With regards to the policy of western governments vis-à-vis Iran, human rights and freedoms have been overlooked.

Second: Western governments have overlooked the role of the Iranian Resistance and opposition, which hold the key to change.

In order to help the regime, they have acted against the Resistance.

Third: The Iranian economic partners of the West are the revolutionary Guards and foundations controlled by the regime’s Supreme Leader. The very same institutions that are the source of insecurity and terrorism in Europe.

The mullahs ruling Iran are currently more fragile and weaker than any other time in the past three decades.

Deepening economical crisis, mounting infightings, crisis in the region, growing popular discontent and increasing resistance by people has brought the regime closer to its downfall.

In order to overcome these crises the mullahs have increasingly intensified their terrorist interventions and warmongering in the region.
The misguided and weak policy of the West was the best ally of the mullahs to spread war in the region.

At the core of this change is a shift with regards to the Iranian regime.

Regarding Syria allow me to repeat what I said on the verge of the Geneva-2 conference:
The only solution for this tragedy of the century is the complete removal of the Iranian regime from Syria.
Nothing else would bring success.

Only through such a removal can the bloodshed be stopped and an elected government be established.

Similarly, the complete disposal of mullahs is also the key to overcoming crises and encouraging reconciliation and peace in Iraq, Lebanon and Yemen.

We must not forget that after the clerical regime unwillingly took a step back in its nuclear projects, it has felt an increasing need to continue and expand its domination over the region.

In the absence of a decisive international policy, the regime will commit greater crimes in these countries with each passing day.

And it will increase the number of hangings in Iran and the killing of the PMOI in Camp Liberty.

The same applies to the nuclear dossier in the absence of a firm global policy, the regime will do everything to keep and continue its nuclear weapons- development project through deception and secrecy.

3000 members of the Iranian Resistance at Liberty prison are under missile attacks by the Iraqi government and the clerical regime.

The forcible displacement of Ashrafis and sending them to Liberty prison was completely supported by western governments.

The U.S., Britain, and the EU all promised to protect members of the Resistance in Liberty.
But, instead they remained silent about the mass executions and hostage-taking that happened on September 1.

Why are they not calling for the release of the 7 hostages, 6 of whom are women?

4 missile attacks in 2013 against Liberty would have been enough-reason
to urgently transfer the residents to the the U.S. and Britain, which have direct responsibility in this situation.
We keep calling for such an urgent measure.
But, for the past three years, Britain has refused to accept even those who have refugee status in that country.

The purpose of changing European policy toward Iran would not only be to improve the situation in Iran but to prevent greater catastrophe.
What is happening today in Syria and Iraq are only the beginning.

You and other parliamentarians supportive of the Resistance have taken courageous steps in this regard so far.

You have the power, and the means to change the wrong policy.

You represent the collective dignity and pride of the British people.

The future of relations between Iran and Britain will be characterized by your efforts.

Your efforts will wash-away bad memories of people towards British meddling in Iran.

You have in your previous speeches perfectly described the religious dictatorship ruling Iran.

As Baroness Boothroyd has already said the massacre of political prisoners in 1988, is the greatest unpunished crime against humanity after the world war two.
For this reason we must continue our struggle against a religious dictatorship ruling Iran that is a threat for peace and security in the world until its downfall.

I wish you all the best and continued success.
Thank you very much