Maryam Rajavi: Genuine Islam only blossoms in the absence of discrimination and compulsion 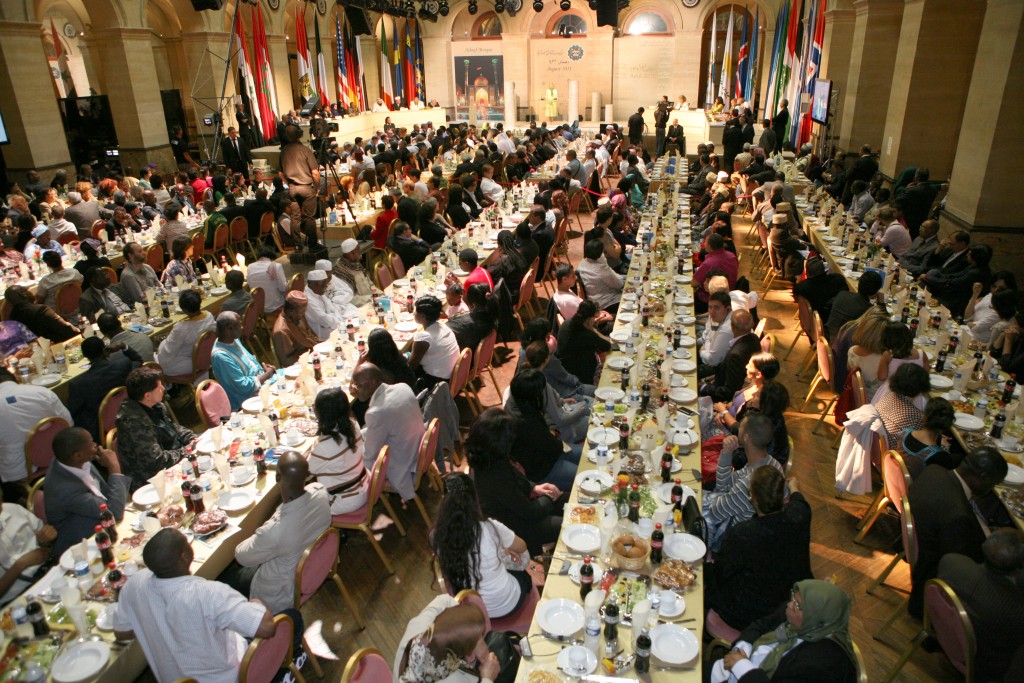 Speech to the Islamic-arabic conference in defense of Ashraf

In the name of God, the merciful and the compassionate,
Dear Sisters and brothers,
Distinguished guests,
I congratulate you, all Muslims in France and around the world, all my compatriots in Iran and the Mojahedin in Camp Ashraf, on the holy month of Ramadan.
Ramadan is a month of fasting. And the Quran has said that fasting brings the believers piety.
The month of Ramadan and fasting heralds both the freedom of the individual human being as well as that of the human community at large, because it orients all towards a unified goal. It helps people to remove all forms of discrimination and inequality from their midst, and to establish solidarity, equality and justice in their society.

Dear Friends,
Across the region, the spring of freedom and revolution has blossomed and the winter of fundamentalism and despotism under the banner of Islam has arrived.
Of course, until its overthrow, the theocracy ruling Iran will try to exploit this volatile situation in order to derail the popular movements of this region for freedom.
The principal question, therefore, is what is the intellectual and cultural response?
In our view, the answer lies in democratic Islam, upon which the People’s Mojahedin rested their resistance against the dictatorships of the mullahs and the Shah for about half a century.

Dear Friends,
Democratic Islam represents the emancipating message of a Prophet (Peace Be Upon Him), who captured the hearts with a message of mercy and compassion.
He said slaves are equal to free human beings.
He initiated the practice of amnesty and releasing prisoners of war, and facilitated the participation of women in the most serious social endeavors.

When the Prophet heard that a father in Mecca had buried her daughter alive, he tearfully said, “One who does not have mercy and affection will not receive God’s mercy.”
Islam is the religion of a Prophet who initiated consultation and discussions in addressing problems.
He urged his followers to be tolerant towards the followers of other religions and opinions. He taught them that they should view divergence of opinions among themselves as a blessing.
He replaced barbaric prejudice with the spirit of tolerance and forgiveness.
And he said I have not come to damn, but have rather been motivated by “compassion.”
And in Medina, he promoted pluralism so that everyone would be free to practice their own religious duties.
Islam, which is the genuine message of the Quran, says that the best before God are the most pious. The Quran recommends to the Prophet to use convincing reasoning when talking to his opponents and to not only be kind to the disgruntled and to the opponents, but also to consult with them.
This is the democratic Islam.
Anything which is contrary to the Prophet’s practice of mercy and tolerance is not Islam.
Anything which would reject God’s compassion and forgiveness is not Islam.
Islam has not come to place shackles on people but to remove existing shackles from them. It has not come to make life difficult but to make it easy for people.

Far beyond its platform and its positions, our movement has followed the democratic Islam in its praxis in the course of its struggle. And it has paid a heavy price for it every step of the way.
At the outset of the 1979 Revolution, Khomeini, the founder of the current regime who had absolute religious authority, erected the new system based on a reactionary and self-serving interpretation of Islam that was and continues to be completely subjugating and totalitarian.
Under the banner of Islam, he made it mandatory to lie and to spy in order to preserve his rule.
He viewed total disregard for the people’s vote and installing an absolute rule as Islam itself.
He promoted limb amputation, gender discrimination, apartheid and the suppression of religious and ethnic minorities.
He executed 120,000 resistance activists and Mojahedin, who were defending freedom and advocated an emancipating Islam.

And he depicted Islam as a frightening religion, whose God was not most merciful and compassionate, but a tyrant who constantly punished the people.

In diametric opposition to such reactionary beliefs, in 1965, the PMOI entered into the political and social scene relying on a genuine and democratic interpretation of Islam.
This movement made it its number one priority to challenge the reactionary and deviant manipulation and interpretation of Islam. It fought against the kind of manipulation which made Islam subordinate to suppressive rulers.
It opposed this type of manipulation which sought to show that Islam defended the status quo and justified discrimination, injustice and exploitation of human beings by other human beings.

Since 40 years ago, Massoud Rajavi has led this theoretical, cultural and ideological campaign.
Some of this struggle was carried out in the Shah’s prisons. And an important part of it was accomplished during the complex domestic and international circumstances in 1978 and 1979, when Khomeini emerged as the undisputed religious and political leader.
Rajavi has also carried the mantle of the struggle after the religious dictatorship was established in Iran.
By correctly interpreting the Quran and Islam, he showed that genuine Islam, more than any other religion, defends equality, justice, freedom and emancipation; that it has the greatest capacity to eliminate discrimination, exploitation and despotism as well as be the harbinger of a democratic society.

He said, “Our Islam, in diametric opposition to Khomeini, need not establish its righteousness and legitimacy through compulsion and reluctance. In other words, we believe profoundly that genuine Islam will only blossom in the absence of discrimination or privilege and compulsion in political and social spheres.”

In virtue of such an understanding, when the regime was first established, our resistance movement drew a firm line in opposition to Khomeini, refusing to collaborate with him and rejected the velayat-e faqih (absolute clerical rule) constitution.
Based on the teachings of the democratic Islam, sovereignty is the most important right Islam has bestowed upon the people. From the very beginning, Massoud Rajavi told Khomeini that he is not going to be an accomplice in his usurpation of that right no matter what the cost.

The Quran explicitly states that God has placed human beings on Earth as his representatives.
Such an interpretation of Islam enabled the PMOI about 30 years ago, in the midst of the propaganda by the religious dictatorship, to enunciate the concept of separation of church and state.
This was an incredible initiative on the part of a Muslim force and, indeed, could not have been serious or impactful unless a Muslim force took the initiative.

We say, let the people be free in the choosing and practice of their religion. As the Quran says, there is no compulsion in religion.
Let everyone choose their own religion and belief system.
Belief or non-belief in a religion is not a crime. It is the imposition of opinion and religion that is a crime.
Fundamentalism, manifested in the rule of the velayat-e faqih, is the sharia of genocide. In 1988, Khomeini massacred 30,000 of our prisoners. At the same time, the Mojahedin released prisoners they had taken from Khomeini and showed that their understanding of democratic Islam is the very forgiveness and mercy which the Prophet has promulgated.

Indeed, we are following an Islam which, in the words of the Quran, views the life of one human as having the same value of all humanity.
Democratic Islam is identified with gender equality. Twenty-seven years ago, women joined the leadership of the Iranian Resistance movement. In the mullahs’ view, this was and is unforgivable blasphemy. For Iran’s oppressed women, however, this was a leap into the future and a powerful inspiration to attain freedom and equality.
The dynamism of the Quran and Islam as well as understanding its genuine essence, which is humankind’s emancipation, reject all inequalities against women.

Viewing women as second class citizens or as having half the rights of men has nothing to do with Islam.
Imposing compulsory veiling on women is contrary to Islam.
As followers of the Quran, we say anything based on compulsion is counter to the spirit of Islam. There is no compulsion in religion.
And finally, I must emphasize that contrary to maniacal thirst for power by the ruling theocracy under the banner of religion, we follow in the footsteps of the Prophet (PBUH), who the Quran described as “a reminder of God Almighty and not someone who exercises supremacy over the people.”

Between our movement’s self-interest and attainting power and remaining committed to the ideal of freedom and democracy and earning the trust of our compatriots, we have chosen the latter. It is our mission to sacrifice ourselves so that the Iranian people can choose freely.
This is what democratic Islam is all about. 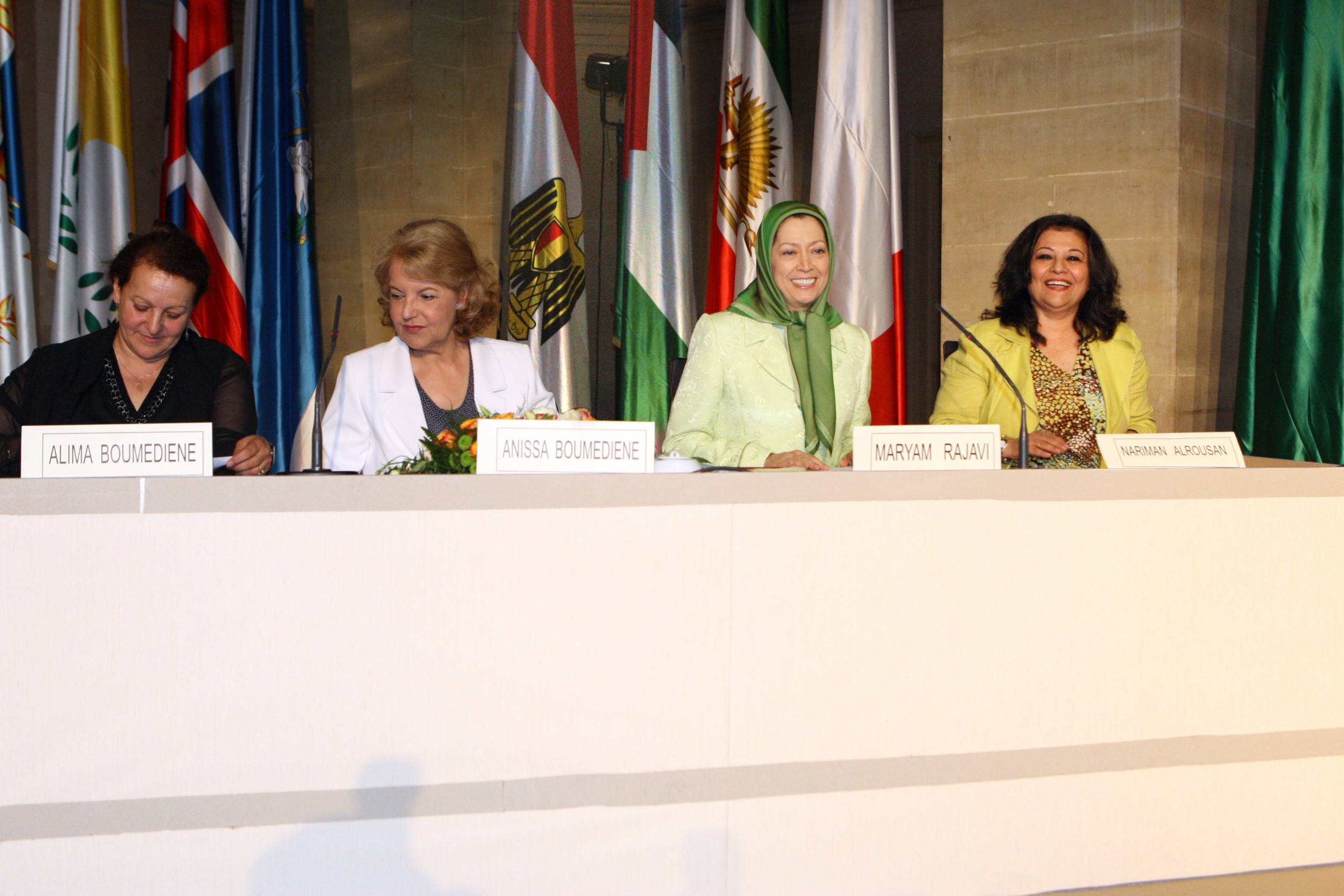 Distinguished guests,
Regression and dictatorship under the banner of Islam have been comprehensively exhibited in the faltering mullahs’ regime.
The exact opposite, Ashraf is the embodiment of those who have followed the democratic Islam and have created a set of relationships based on trust, unity of action, equality, love and dedicating one’s self to the cause of others.
By following this school of thought, the Mojahedin in Ashraf have defeated the mullahs’ reactionary, suppressive and constricting interpretation of Islam in social and cultural realms.

For this reason, Ashraf serves as a beacon and an inspiration, not only for Iranian women and youth, but also for the people of the Middle East who are fed up with fundamentalism.
And for this reason, the mullahs of Iran have targeted Ashraf as the most important existential threat. In the past two years, they have created two massacres at Ashraf and now through their proxy government in Iraq, are trying to create an even greater humanitarian catastrophe.

I urge all of you to do your utmost to defend the residents of Ashraf, who form a barrier against fundamentalism and terrorism.
I appeal to all of you to convince the international community, especially the United States, the UN High Commissioner for Human Rights and the High Commissioner for Refugees, to stand by their responsibilities vis-à-vis Ashraf residents consistent with international law.
Defending Ashraf, where 1,000 pioneering Muslim women also live, is an urgent Islamic obligation today.
Similarly, its protection offers the litmus test of the commitment of the international community and the United Nations to safeguarding human rights.

Once again, I plead with God Almighty, to bestow upon you His blessings for your fasting, good deeds and prayers.
We pray to God to bring to fruition the liberation of the people of Iran from the yoke of the ruling henchmen!
O God, release political prisoners from Khamenei’s chambers.

Dear God, bless and obtain victory for the uprisings and protestors in the Middle East and North Africa.
O Dear God, increase the will and endurance of youths and protestors in Iran and the region, and shatter the walls of conspiracies and heinous crimes perpetrated against them by the dictatorships, and facilitate their path to victory.
Dear God, please help remove the siege on Ashraf, end the psychological torture against the residents, and help the wounded to heal.

I am confident that through our solidarity and your efforts, we can make these prayers into reality and prevent the occurrence of a humanitarian catastrophe.

I thank all of you and wish the best for you during this Iftar.