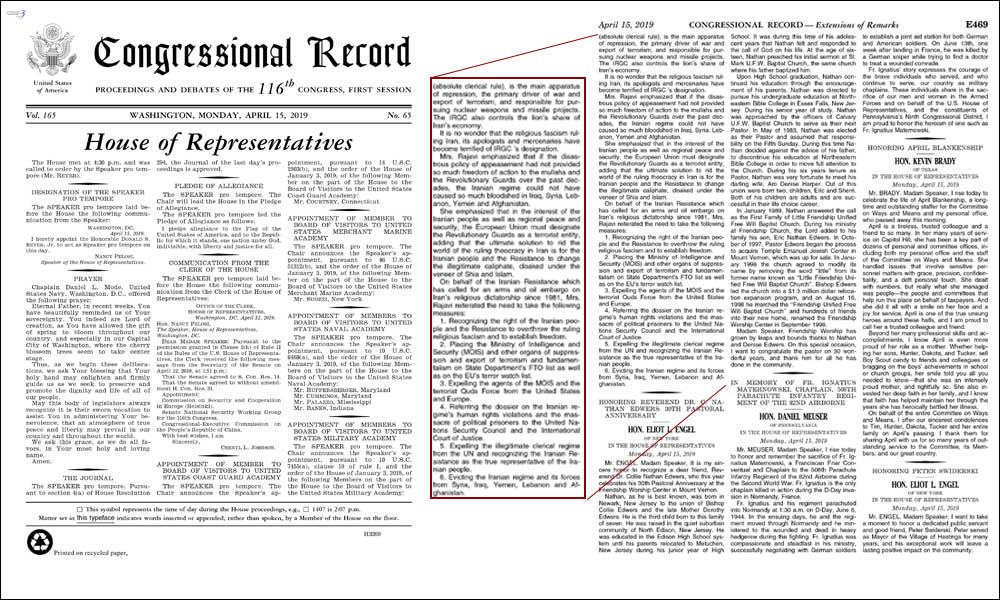 REGARDING THE DESIGNATION OF IRAN’S ISLAMIC REVOLUTIONARY GUARDS CORPS
AS A FOREIGN TERRORIST ORGANIZATION
HON. TOM McCLINTOCK
of california in the house of representatives
Monday, April 15, 2019

Mr. McCLINTOCK. Madam Speaker, I include in the Record the following release which includes the statement by Mrs. Maryam Rajavi, the President-elect of the National Council of Resistance of Iran, regarding the designation of Iran’s Islamic Revolutionary Guards Corps (IRGC) as a Foreign Terrorist Organization.

Mrs. Maryam Rajavi, the President-elect of the National Council of Resistance of Iran, described the inclusion of the suppressive Revolutionary Guards (IRGC) in the State Department’s list of Foreign Terrorist Organizations (FTO) as a long-standing and rightful demand of the Iranian Resistance, an imperative for Middle East security, peace, and stability, and an urgent and necessary step to end war and terrorism throughout the region and the world.

“This action, which was long overdue, should now be completed by designating the Iranian regime’s Ministry of Intelligence and Security (MOIS),” Mrs. Rajavi added.
The Revolutionary Guard Corps, which does not even carry Iran in its official name, constitutes the pillar of the velayat-e faqih regime

(absolute clerical rule), is the main apparatus of repression, the primary driver of war and export of terrorism, and responsible for pursuing nuclear weapons and missile projects. The IRGC also controls the lion’s share of Iran’s economy. It is no wonder that the religious fascism ruling Iran, its apologists and mercenaries have become terrified of IRGC ‘s designation.

Mrs. Rajavi emphasized that if the disastrous policy of appeasement had not provided so much freedom of action to the mullahs and the Revolutionary Guards over the past decades, the Iranian regime could not have caused so much bloodshed in Iraq, Syria. Lebanon, Yemen and Afghanistan.

She emphasized that in the interest of the Iranian people as well as regional peace and security, the European Union must designate the Revolutionary Guards as a terrorist entity, adding that the ultimate solution to rid the world of the ruling theocracy in Iran is for the Iranian people and the Resistance to change the illegitimate caliphate, cloaked under the veneer of Shia and Islam.

On behalf of the Iranian Resistance which has called for an arms and oil embargo on Iran’s religious dictatorship since 1981, Mrs. Rajavi reiterated the need to take the following measures:

1. Recognizing the right of the Iranian people and the Resistance to overthrow the ruling religious fascism and to establish freedom.

2. Placing the Ministry of Intelligence and Security (MOIS) and other organs of suppression and export of terrorism and fundamentalism on State Department’s FTO list as well as on the EU’s terror watch list.

3. Expelling the agents of the MOIS and the terrorist Quds Force from the United States and Europe.

4. Referring the dossier on the Iranian regime’s human rights violations and the massacre of political prisoners to the United Nations Security Council and the International Court of Justice.

5. Expelling the illegitimate clerical regime from the UN and recognizing the Iranian Resistance as the true representative of the Iranian people.

6. Evicting the Iranian regime and its forces from Syria, Iraq, Yemen, Lebanon and Afghanistan.