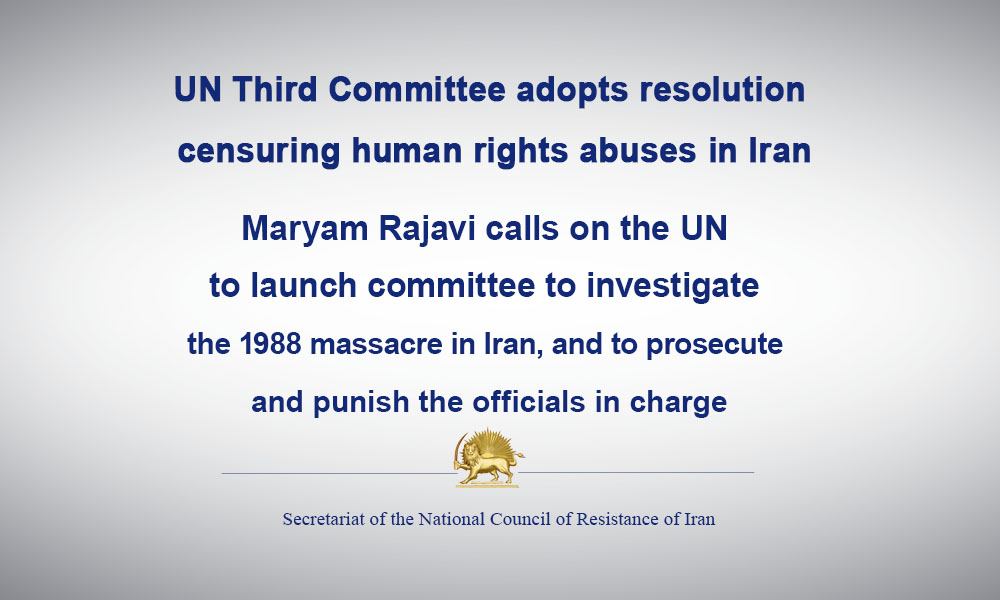 Maryam Rajavi welcomed the 64th UN resolution condemning the violations of human rights in Iran adopted only a few hours ago by the UN Third Committee. She pointed out, “The time has come for the international community and especially the UN Security Council to undertake effective and practical measures against the religious fascism ruling Iran for its flagrant and systematic violations of human rights in Iran, particularly the brutal executions that are carried out arbitrarily and en masse.”

Referring to the resolution’s call on the Iranian regime “to launch a comprehensive accountability process in response to all cases of serious human rights violations, including those involving the Iranian judiciary and security agencies, and… to end impunity for such violations,” she stressed, “The best example of serious human rights violations in Iran is the massacre of political prisoners in 1988 in which all the clerical regime’s agencies and officials including Ali Khamenei, the president, the judiciary, the mullahs’ parliament, and the highest officials in charge of security and intelligence agencies were involved and complicit. They defend it and have so far remained immune from prosecution. Therefore, the international community faces a great test in investigating this great crime against humanity and prosecuting its perpetrators.”

Pointing to the reports of the UN Secretary General and the UN Special Rapporteur on the situation of human rights in Iran who have called for a comprehensive and independent investigation of the 1988 massacre of political prisoners in Iran, Maryam Rajavi also urged the UN to launch an investigative committee for this case and added, “This is the first step in putting an end to the impunity of criminals who have been ruling Iran for 38 years.”

The UN Third Committee expressed “serious concern at the alarmingly high frequency of the imposition and carrying-out of the death penalty… including the imposition of the death penalty against minors and persons who at the time of their offence were under the age of 18, and executions undertaken for crimes that do not qualify as the most serious crimes, on the basis of forced confessions” and called on the Iranian regime “to abolish, in law and in practice, public executions.”

The resolution also called on the Iranian regime “to ensure, in law and in practice, that no one is subjected to torture or other cruel, inhuman or degrading treatment or punishment” and urged them “to cease the widespread and systematic use of arbitrary detention, including the use of such practices to target dual and foreign nationals, and to uphold, in law and in practice, procedural guarantees to ensure fair trial standards.”

The resolution also calls on the Iranian regime “to address the poor conditions of prisons, to eliminate the denial of access to adequate medical treatment and the consequent risk of death faced by prisoners”; “to end widespread and serious restrictions, in law and in practice, on the right to freedom of expression, opinion, association and peaceful assembly, both online and offline”; end “the harassment, intimidation and persecution of political opponents, human rights defenders, women’s and minority rights activists, labour leaders, students’ rights activists, academics, film-makers, journalists, bloggers, social media users and social media page administrators, media workers, religious leaders, artists, lawyers and persons belonging to recognized and unrecognized religious minorities and their families”; “to release persons arbitrarily detained for the legitimate exercise of these rights”; “to consider rescinding unduly harsh sentences, including the death penalty and long-term internal exile, for exercising such fundamental freedoms and to end reprisals against individuals, including for cooperating with the United Nations human rights mechanisms,” and “to eliminate, in law and in practice, all forms of discrimination and other human rights violations against women and girls” and “against persons belonging to religious, ethnic, linguistic or other minorities.”

The Secretariat of the National Council of Resistance of Iran
November 14, 2017