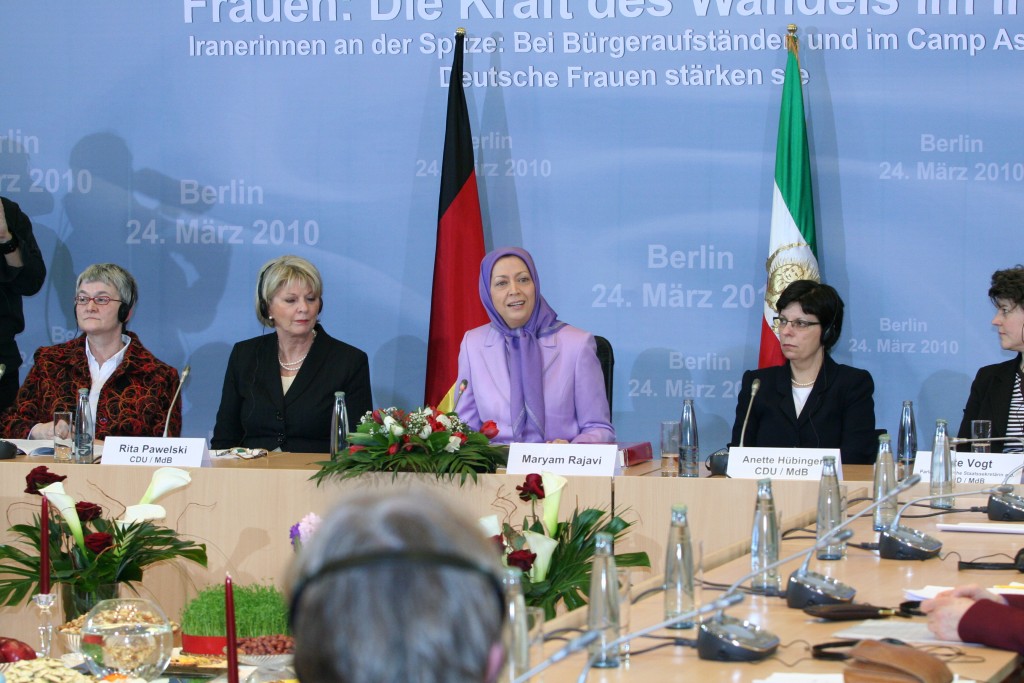 Women Members of German Federal Parliament and activists of equality movement declared their solidarity with Iranian women and those in Camp Ashraf. Mrs. Maryam Rajavi was the keynote speaker in the meeting.

Participants called on the German government to urge the United States and the United Nations to ensure the protection of the residents of Ashraf and prevent a repeat of the July 2009 attack on the Camp and their forcible displacement, especially the 1,000 women in the Camp.

In the meeting, Mrs. Rajavi urged them to support the Iranian people and their Resistance for freedom as well as the residents of Ashraf. She also called for a change in the policy of European governments so that appeasing the religious dictatorship is ended and the EU countries stand with the Iranian people and their Resistance movement. Text follows:

I am pleased to be in a gathering of elected members of German people, intellectuals and activists of the equality movement as we just celebrated the Iranian New Year, Nowrouz.

“Nowrouz” refers to the first day of spring and the biggest Iranian festivity. It can be thought of as the symbol of resistance against injustices as well as a symbol of solidarity among human beings. Today, this is the subject matter of the struggle of women and the Iranian people against the ruling regime in Iran.

I am here with you on behalf of the National Council of Resistance of Iran (NCRI). It is a coalition of parties and personalities harboring varying opinions and political inclinations from the entire spectrum of ethnicities and minorities across Iran. The NCRI is an alternative to the Iranian regime and seeks to end dictatorship and establish the establishment of a republic based on, pluralism, separation of church and state and gender equality. It is committed to the abolishment of death penalty and a non-nuclear Iran.

The details of our opinions and programs for women are at your disposal.

Considering the topic of our discussion, women, force of change, I see it appropriate to expand on the status of women in our resistance. Fifty-two percent of the seats in the NCRI are held by women.

Women also have key roles in various departments of the resistance movement. I must specifically refer to Ashraf, home to 3,400 opposition members in Iraq and located 70 km from the Iranian border. Ashraf is led by women. Fulfilling this responsibility has been an enormous challenge for women in the resistance, because its context and circumstances where such that Ashraf was the target of deadly attacks and numerous plots by the Iranian regime and its operatives in Iraq.

There are 1,000 pioneering women in Ashraf. Most of them are former students or university graduates from Europe, the US, Canada and Iran. Some 200 are former political prisoners under the current regime, spending an average of 5 years in prison. Their activities over the past three decades have been inspirational to the struggle of women and youths in Iran to obtain democracy and equality.

For those who have heard even a little about the ruling dictatorship in Iran, the status of Iranian women is perhaps an extraordinary and surprising phenomenon, because in Iran a medieval regime rules which is characterized by misogyny. This regime imposes the cruelest forms of torture, as well as the most inhumane punishments such as stoning and eye gouging. These suppressive methods are mostly imposed against women.

In reality, there are three fundamental factors giving rise to the pioneering status of Iranian women.

First, Iranian women have a 150-year-old history of struggle against dictatorship and endeavors towards obtaining equality. This background has granted Iranian women with a ground-breaking role both in cultural and intellectual terms.

The second factor is the misogyny of the regime itself. The mullahs have deprived women of their rights and freedoms and denigrated their position to second-class citizens. This catastrophic suppression has accumulated enormous energy in women as a whole.

The third factor is the existence of an organized resistance with deep roots in Iranian society. The movement’s commitment to gender equality and its historical initiative in accepting women’s leadership constitutes a progressive leap in the context of equality in Iranian society, especially since at the core of this movement is the People’s Mojahedin Organization of Iran (PMOI/MEK), which believes in a tolerant interpretation of Islam. The PMOI’s commitment to equality has had a profound influence on Muslim women and men not only in Iran but also in countries in the region.

These factors revealed themselves clearly in the current uprisings in Iran.

Women took part in anti-regime protests in overwhelming numbers. They are actively involved in the extensive networks organizing the uprisings. They are also leading the protestors in some arenas, courageously rising up against the assault of the regime’s Revolutionary Guards and encouraging their compatriots to take part in the protests. They provide care to the wounded and are unwavering in their resistance under torture in the regime’s prisons.

Their presence represents the progressive character of the uprising. After all, the direction and demand of the uprising, which is to uproot the ruling mullahs, has largely been influenced by women’s presence on the scene.

On the basis of an objective analysis, we would conclude that women have played a hegemonic role during the uprisings of the past nine months. This once again proves that women serve as the answer to fundamentalists and that the defeat of fundamentalism is possible by women. 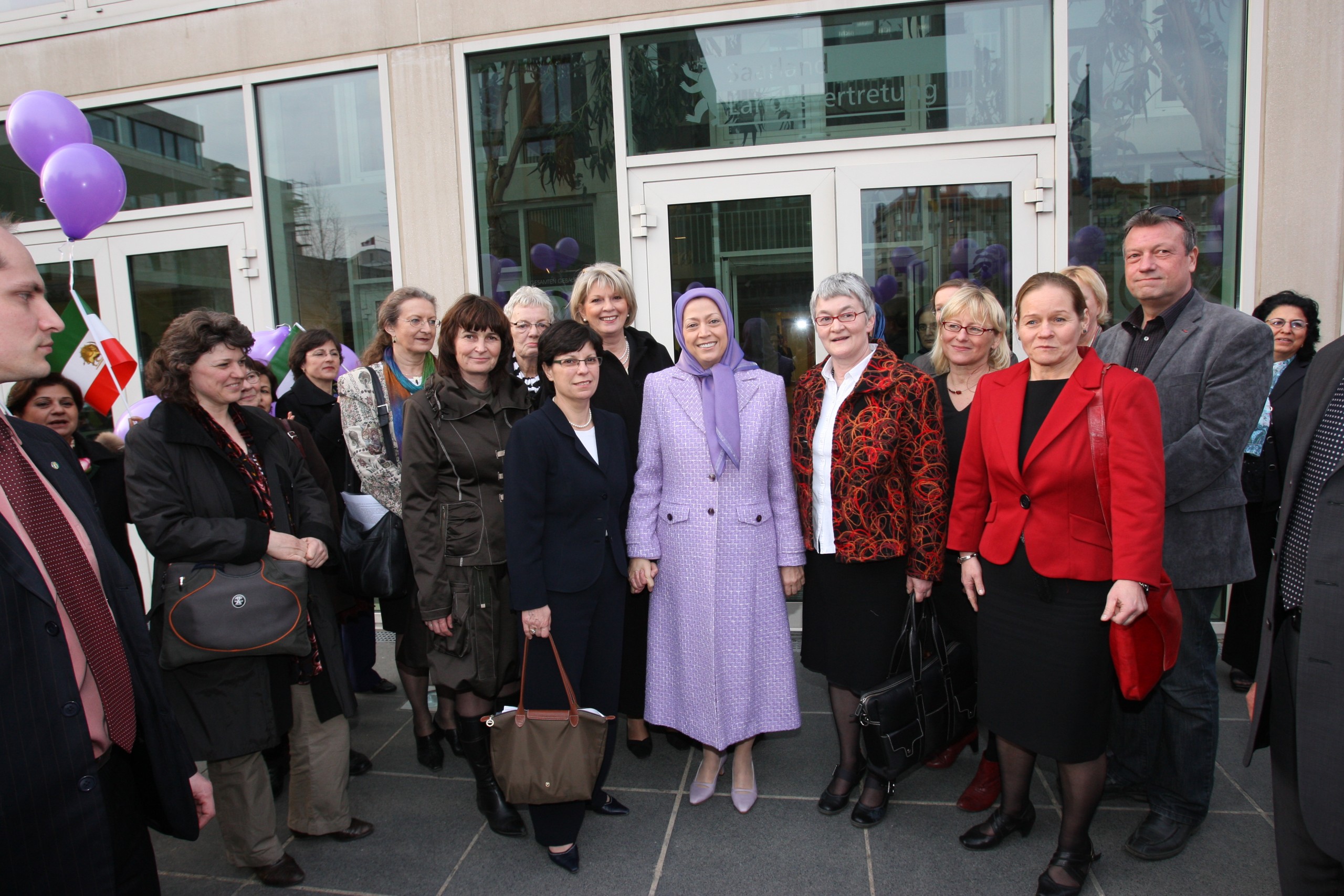 I briefly explained here why the women are the force of change in Iran.

Prior to the uprisings, western governments claimed that the regime enjoys popular backing and stability. Accordingly, their solution was to placate the mullahs in hopes of cultivating moderation in the regime’s behavior. However, the mullahs reaped all the benefits and intensified their extremist ways in the context of developing nuclear weapons, export of terrorism and domestic suppression.

The uprisings in Iran demonstrated how wrong those assessments were and how vulnerable the mullahs really are and just to what extent the Iranian society despises them.

The Iranian people have showed that they want change and are prepared to pay the price for it. In addition, an organized movement offering a democratic program and enjoying sufficient popular backing is present on the scene. However, the West has in practice not changed its policy towards Iran in practice. We have heard a lot about a tough approach against the regime. But take a look at the European Union’s, including Germany’s practical policy, where the priority is to preserve the strands of appeasement. This policy manifests itself in extensive economic ties, which sometimes goes as far as providing equipment used for suppression and censorship as well as exerting pressure on the opposition at the behest of the Iranian regime and under bogus pretests and dubious report by this or that government agency the source of which is the Iranian regime’s intelligence services.

So long as the policy to pressure and blockade the resistance continues, the mullahs pursue their repressive and misogynous policies at home and the efforts to obtain nuclear weapons and export terrorism and fundamentalism without scruples.

For this reason, I call on you as the elected members of German people and my sisters throughout Germany to work to change such policies.

Helping Iranian women supports the movement for freedom and greatly contributes to the resistance against Islamic fundamentalism, the most important threat to achievements of equality movement across the world.

Today, many have reached the conclusion that 15 years after the Beijing Conference, one of the most important obstacle to progress of its resolutions is that many governments fear Islamic fundamentalism.

But, what are the most essential forms of assistance to the resistance of Iranian women?

First, I invite you to make all efforts to change the West’s policy towards the regime. This change would reveal itself in the imposition of comprehensive sanctions against the regime, especially placing the Islamic Revolutionary Guard Corps (IRGC) on the terrorist list and banning its front companies in Europe.

Second, I urge you to make efforts so that the NCRI is recognized and the restrictions against the resistance are lifted.

Third, in the face of threats from the Iranian regime and its proxies in Iraq to destroy Ashraf and its residents, rise up in support of the 1,000 women in Ashraf. Europe must warn the Iraqi government against the use of violence towards the residents and encourage the United Nations to assume the responsibility to protect Camp Ashraf.

I conclude by paying tribute to honorable German women who have diligently supported the Iranian Resistance, particularly the women in Ashraf. I should especially pay homage to the memory of Mrs. Ingrid Holtzhutter whom we lost last year. For us, she will always be remembers as an outstanding symbol of defending Iranian women.