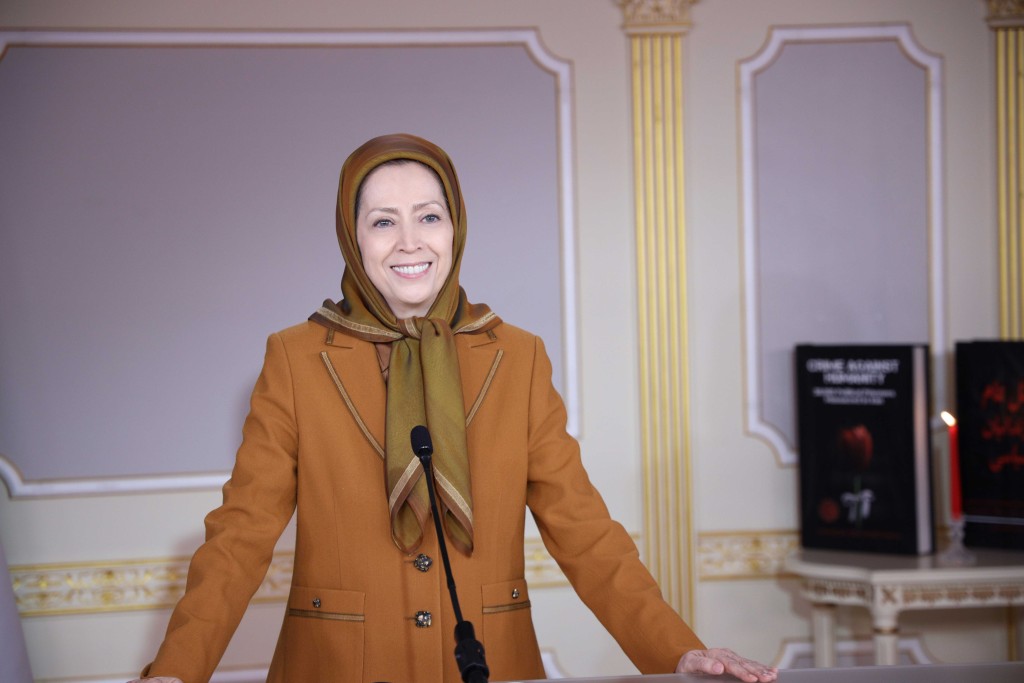 Message to the demonstration by Iranians in Stockholm

Fellow compatriots seeking justice for the political prisoners massacred in 1988 and for revitalizing the sacrifices of those who were killed extrajudicially under the religious fascism in Iran for standing their ground;
Supporters of the Iranian Resistance who have ceaselessly demonstrated and marched in the past nine months to urge the world to prosecute the mass murderers ruling Iran for their crimes against humanity, war crimes, and genocide;
Sisters, brothers, and friends who stood fast and did not allow the mullahs’ Ministry of Intelligence succeed in its plots to divert and seize control of the Call for Justice Movement;
Brave patriots who are always prepared to pursue the prosecution of the leaders of the religious dictatorship in our homeland and will never forget or forgive them;
I extend the warmest greetings and gratitude to you all!

The slaughter of political prisoners in Gohardasht Prison was declared a war crime and a crime against humanity, demanding the most severe punishment for one of the perpetrators involved. The announcement is just one of your magnificent Call for Justice campaign stages. However, it is the historical product of the sacrifices made by the political prisoners who stood their ground and were massacred starting in August 1988.

A glance at the Call for Justice Movement from the outset

Beginning in late July and August of 1988, Massoud Rajavi, the Leader of the Iranian Resistance, sent numerous letters and cables to the UN Secretary-General. In his correspondence, he revealed the ongoing slaughter, and particularly the contents of Khomeini’s fatwa. That was 12 years before Mr. Hossein-Ali Montazeri published the text of Khomeini’s verdict.
At the time, the PMOI and its supporters held demonstrations and hunger strikes in many countries to inform and awaken international public opinion. We do not forget that a PMOI supporter, Mehrdad Iman, set himself on fire in protest during a demonstration in New York in September 1988 and died.
Over the past 34 years, the Iranian Resistance has held hundreds and thousands of conferences, demonstrations, rallies, and symbolic tribunals, revealing documents, names of victims, and locations of unmarked graves and mass graves.
In mid-July 2016, the families of martyrs and political prisoners issued a statement, launching a new stage in the Call for Justice Movement. The activities inside Iran to collect additional information resulted in the publication of the List of 5,000 PMOI Victims of the 1988 Massacre.

The Call for Justice Movement also played an essential role in the defeat of the disgraced Ebrahim Raisi during the regime’s 2017 presidential election through the slogan “No to the executioner, no to the Charlatan.”
The torrent of letters and complaints by bereaved families inside Iran led to unprecedented stances by UN agencies, including the Special Rapporteur on Human Rights in Iran.
I should also highlight the extensive political and international activities conducted in this regard, including 30 major international conferences and numerous parliamentary declarations and resolutions. Among them were the statements by more than 200 members of both chambers of the British Parliament and 60 members of the European Parliament. The British House of Commons passed the Early Day Motion 448, and the U.S. Congress adopted several resolutions, bills, and statements. Parliaments in other countries also passed many declarations and resolutions thanks to the relentless efforts of members of the Iranian Resistance.

I salute everyone who sacrificed and endeavored in this Call for Justice Movement for the past three decades. That includes Prof. Kazem Rajavi and all those who were arrested and tortured for collecting information on the massacre, filing a complaint, or protesting against the regime. I also salute the PMOI and Marxist prisoners. They gave accurate testimonies with irrefutable details on the 1988 massacre. With a deep sense of responsibility, they thus supplied the essential documents for the Prosecutor’s indictment.
The District Court of Stockholm has not yet issued its final verdict over the prosecution of Hamid Noury, who is an executioner. However, what has already been proven is that the 1988 massacre of political prisoners upon Khomeini’s fatwa was a crime against humanity. The Iranian Resistance has been insisting that the world should accept this fact since many years ago. The Prosecutor reiterated that Gohardasht Prison had turned into a slaughterhouse in those days.
The focal point of the case is Khomeini’s fatwa for the execution of PMOI prisoners who stood their ground. The victims were heroes who adhered to their pledges for the Iranian people’s freedom. They proudly said NO to the executioners and refused to abandon their cause and organization. Hail to them all!

The massacre’s masterminds and perpetrators to be tried in Iran

The trial in Stockholm proved the validity of the PMOI prisoners’ testimonies. It also confirmed that the 34-year revelations of the PMOI and the National Council of Resistance of Iran (NCRI) about the massacre were credible. This is a massive blow to the clerical regime, which kept denying the killings from the onset.
The trial’s process and results until this point mean that the Iranian regime’s conspiracies against the Call for Justice Movement have largely failed. The mullahs who initially denied the massacre altogether later sought to contain its impact. Over the past nine months, your gatherings and demonstrations have played a decisive role in defeating the regime’s efforts.
You will recall the statement by the NCRI’s Security and Counter-Terrorism Committee in which it divulged the audio recording of a conversation between Moghiseh and Razini. The tape showed that they were aware of a plan to carry out the mullahs’ Intelligence Ministry scenario. The Swedish Prosecutor also said that Hamid Noury had “accepted that Nasserian (Moghiseh) had warned him about traveling to Sweden.”

The mullahs and their hirelings are now jumping up and down outside the Swedish Embassy in Tehran. They slander the PMOI, summon the ambassador, issue successive warnings, and threaten to retaliate. We say that the time will come for all the officials and masterminds of this massive crime to face justice in Iran. This is the trial that Khamenei and Raisi fear most.

The glorious epic of contemporary times

The murderers and mercenaries who harbor the illusion that they can hide or trivialize the massacre by destroying the victims’ tombs or by all kinds of lies are sorely mistaken.
Those heroes, who stood their ground, said NO to Khomeini’s henchmen in the name of freedom and walked to the gallows while praising Massoud (Rajavi). Their perseverance marks a glorious epic in Iran’s history. Those who think they can destroy this legacy are utterly wrong.

Those trying in vain to use the martyrdom of 30,000 political prisoners to conspire against the PMOI and their leader are seriously mistaken. The brilliance of this glorious epic of our times, the tremendous sacrifice of those steadfast heroes, and their historical status and dignity have turned into the Iranian people’s national honor and judge of values. The mullahs and their accomplices have not and will not be able to seize or deviate it.
The final word is what Massoud emphasizes: “The investigation into the genocide and crimes against humanity during the 1988 massacre of political prisoners should be extended to all prisons across Iran, not just Gohardasht Prison, beginning in 1981. Iran’s courageous children, and we will confront the regime’s leaders, executioners, and mercenaries in the Iranian people’s court of justice.”
God bless the martyrs
Long live freedom
Hail to you all