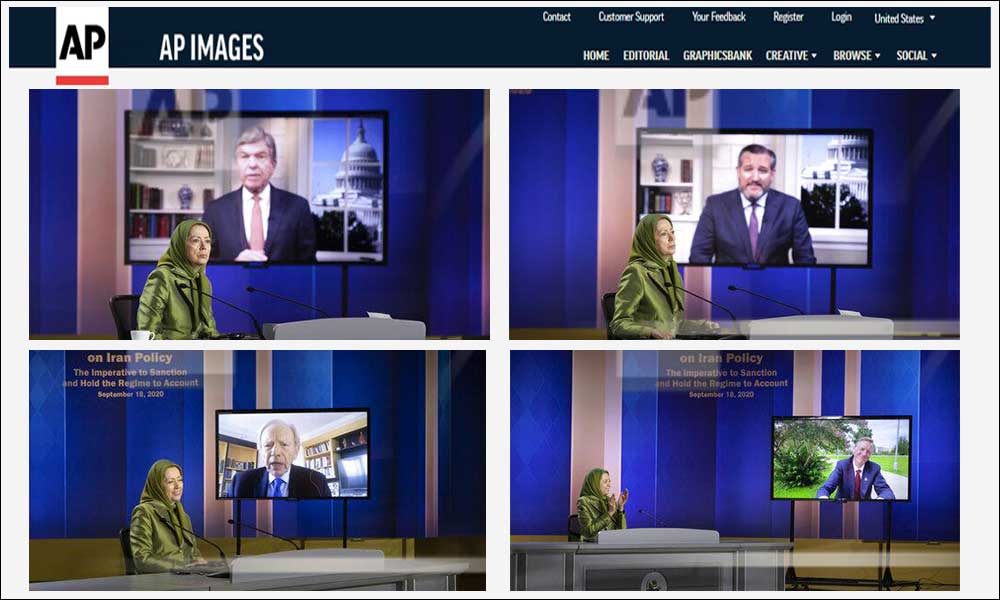 The conference brought together bipartisan U.S. lawmakers from the House and the Senate and from Europe as well as Iranians around the world from 10,000 locations.

The President-elect of the National Council of Resistance of Iran Maryam Rajavi listens to Senator Roy Blunt, chairman of the Senate Republican Policy Committee; Senator Ted Cruz (R-TX); Senator Joseph Lieberman, Vice-presidential candidate in the US election 2000; Rep. Paul Gosar (R-AZ), as they address the Trans-Atlantic Summit on Iran Policy, Time to Hold the Iranian Regime Accountable, held at Ashraf 3, on September 18, 2020.

Senator Blunt said despite the hopes that the previous administration had for moderation, Iran has just simply increased its destructive activities after the Joint Comprehensive Plan of Action. The Iranian sanction regime is the best tool we have to hold Iran accountable, and one we really need to continue to keep

Senator Cruz said it is an absolute necessity that we hold the officials of the Iranian regime and their enablers accountable for their torture, their human rights abuses, and their crimes against humanity.

Rep. Gosar said the common bond we share in fighting for a free Iran remains united as ever. We are working hard in support for Ms. Maryam Rajavi and her vision for Iran future.

Senator Lieberman said I am a Democrat, the first thing I want to say is, thank you President Trump and your administration for withdrawing from the Iran Nuclear Agreement, for snatching victory from the jaws of defeat, and for showing how, oh, how irresponsible, how lawless, what a terrible deal that was.

Gen. Keane, former Vice Chief of Staff of the United States Army, said I join my American colleagues in fully supporting your resistance movement, your drive for a free Iran, your willingness under the leadership of Maryam Rajavi to inspire the people of Iran and the people around the world by vividly bringing to the world’s attention the struggle of Iranian people for their freedom.

Senator Portman Chairman of the Permanent Subcommittee on Investigations of the Senate Homeland Security Committee, said our conflict is not with the people of Iran, but rather with the fundamentalist regime that currently oppresses them. We must continue to show strength in the face of the regime’s attempts at undermining the international rule of law and spreading international terrorism as well

Rudy Giuliani said the NCR presents a dramatic democratic alternative to this regime of terror. They have a government in waiting that can take Iran through the transition. Iran is deathly afraid of Madame Rajavi’s whole vision for a future Iran.

Rep. Jackson said I support the fighters in Iran for human rights, and to stand with those like Madam Rajavi, who want human rights and the fights against the abuses, the horrible abuses that people are facing in Iran who just simply want justice, equality, and human rights.

Representative Lance Gooden (R-TX) said I support the 10-point plan that Madam Rajavi has put out as I know all of you do. I want to encourage you and just let you know that you have friends in the U.S. that are supporting your efforts.

Gen. Jones, first National Security Advisor to President Obama, emphasized, we must support the Iranian people and the NCRI. They are the ones who will topple the regime. They will usher in a new era for the history of Iran. I am deeply appreciative of the leadership of Madam Rajavi and her Jeffersonian ten-point plan.