Speech in international conference of Paris 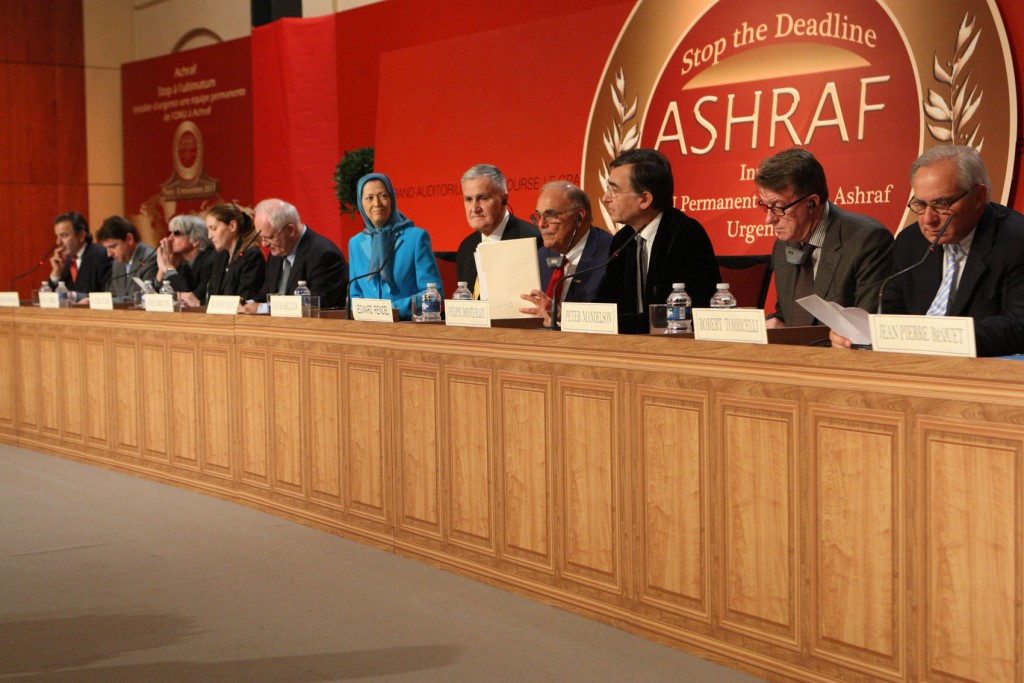 I salute you all and am pleased to meet each and every one of you.

This conference is being held at a time when Camp Ashraf is facing a dire situation.

The world has called for the protection of the residents of Ashraf. The mullahs’ regime and its puppet government in Iraq, however, have created all sorts of obstructions.

I call on every one to stand in the way of a massacre which the mullahs and the Iraqi government are promising every day to commit;

To the United States, the European Union, the Arab League and the United Nations.

I thank the Committee of Mayors of France for defense of Ashraf and their mobilization and their support in this regard.
They are on the forefront of being on the side of the residents of Ashraf.

I say,time for sitting idle has ended.

I ask them to demand the postponement of the Iraqi government’s hideous deadline to close down Camp Ashraf.

I urge them to oppose Iraq’s decision to relocate the residents of Ashraf and their handover to the mullahs.

I ask them to persuade the Security Council to station U.N. monitors and Blue Helmets in Ashraf until the resettlement of all residents of Ashraf in third countries.

I appeal to them to not allow a repeat of the April 8th massacre.

Listen to the call by Aziz Rezaee, eight of whose children have been murdered by the regime. Listen to the outcry of many mothers, fathers, brothers and sisters. Do not allow a repeat of this catastrophe.

Support the Iranian Resistance who is advocating a free and democratic Iran; an Iran that stands for liberty, equality and brotherhood. An Iran that stands for separation of religion and state and respects the liberties of women and men and allows women to freely select their own form of clothing and participate in the leadership of the nation. A non-nuclear Iran. An Iran with free and democratic elections. These are the values of the Iranian Resistance and against the suppressive and terrorist mullahs in Iran.

Join us to build Iran that we love all.
Allow me to continue my remarks in Farsi.

With the resistance of the Mojahedin in Ashraf and with your support and the efforts of the noble supporters of the Resistance some of whom are here in this conference, the world is today standing with Ashraf.

The mullahs and their puppets in Iraq are stinging from their isolation and the world’s abhorrence of them. But they have not desisted from their evil objectives for Ashraf.

So we must increase our struggle for the protection and rights of Ashraf residents one hundred fold.

On November 3rd, 42 US Representatives called on the UN Secretary General to establish an office of the UNHCR and OHCHR in Ashraf so they can work in cooperation with UNAMI and the UN monitoring team in a secure setting for the asylum of Ashraf residents.

On November 3rd, the UN Representative in Iraq announced his readiness to use the UN’s good offices to resolve this crisis.

On November 2, the US House Foreign Relations Committee unanimously adopted an Amendment emphasizing that the Iraqi Government must not close Ashraf until such time that the UNHCR has completed its processing.

On November 1st, Amnesty International issues a formal statement emphatically calling on the Iraqi Government to extend its deadline.

On October 29, 180 European Parliamentarians made the same call.

During September and October every day we could hear calls from various countries, from parliaments and international organizations demanding revocation of the deadline and respect for the right of Ashraf residents.

Nevertheless, the Iraqi Government has closed its ears to the whole world and only listens to the orders issued by Tehran’s religious dictatorship.

Precisely for this reason we must be the voice of justice seeking Ashraf residents and all the people of Iran.

To quote Massoud: “If you remain steadfast like a mountain just like the freedom-seeking Mojahedin of Ashraf, and if you pay the price no matter what it may be, then the whole world will rise in your support and contemporary human society will stand with our nation with universal values of love of liberty.”

On November 3, the Iraqi premiere advisor said in a conference with the UN Secretary General’s Representative in Iraq two days ago that if a quick solution is reached then the Iraqi Government will consider extending the deadline.

Less than two hours after these remarks, the Iraqi Government issued a formal communiqué and once again stressed the closure of Ashraf by the end of the current year. It clearly demonstrated that it is impeding all efforts and solutions, otherwise, if the Iraqi Government wants a solution, it must remove the 300 loudspeakers that right now are threatening Ashraf residents with death and destruction. Just as it should end the siege of Ashraf, the unjust medical blockade as well as fuel and other logistic blockade and allow the UNHCR to start its work in Ashraf.

All solutions are at hand but the first step is to remove the gun from the Mojahedin’s heads.

The Iraqi government prevented an international investigation into the April 8 massacre. Amnesty International recently highlighted that despite Iraqi government making false announcements to investigate, as before no investigation has been conducted. . Iraq also prevented that U.S. Congressional and European Parliament delegations from visiting Ashraf. It also refused to cooperate with the Catherine Ashton’s personal envoy on Ashraf.

Most importantly, by making more and more obstacles, the Iraqi government is blocking any move towards transferring the residents of Ashraf to third countries. These obstructions have acted in three major ways:

First, the Iraqi government is undermining the decision of the UNHCR to determine the status of the residents of Camp Ashraf.

On September 13, the UNHCR officially declared the residents to be asylum-seekers who enjoy basic protections. Since then, the Maliki government has disrupted the UNHCR’s process of determining the status of the residents of Ashraf.

This is while obtaining refuges status is a prerequisite to being transferred to third countries.

The efforts aimed at forcible relocation within Iraq, which the U.S. embassy in Baghdad pursued for some time, resulted in losing several month and adversely affected the plan to protect the residents and their transfer to third countries.

Third, the Iraqi government set a deadline to close down Camp Ashraf at the end of this year. This deadline eliminates the time and space needed to find any peaceful solution and in particular eliminates the opportunity to resettle the residents.
This deadline is the instructions of the mullahs in Tehran and the main subject of the 7-point agreement between Iranian regime and the Iraqi government.
The UNHCR has demanded a postponing of the deadline as I said before several parliaments and international organizations are saying that this deadline has no legitimacy and must be revoked.

I must emphasize that the Iranian Resistance and the residents of Ashraf are prepared for any option other than being eliminated or being forced into surrender.

In the past few months, the residents of Ashraf have offered seven options, including:

Since April 8, I have written seven letters to U.S. government officials, urging them to uphold the U.S. obligations to protect the residents of Ashraf until their relocation.

In hundreds of letters to the European and Arab leaders I have urged them to support the plan to relocate the residents and provide for their protection.

I wrote several times to the UN Secretary General and UN institutions. I have requested that UN station its monitors at Ashraf.

We have told them and tell them again that we are prepared to pay for the expenses for the UN monitors.

In many letters and meetings with many European officials I have requested them to accept a number of the residents who were severely wounded during the April 8th assault.

Unfortunately, the response has been quite meager.

Nonetheless, I again call on the international community to use its wherewithal to avert a massacre at Ashraf.

When the Iraqi government has blocked all paths to a solution, we must not remain ambivalent. We must not be witness of another Srebrenica. The experience of Nazi relocation must not be repeated.

France, Britain and several European Union nations took responsibility vis-à-vis the people of Benghazi, because they were facing a massacre. This is precisely the same situation for Ashraf residents.

I must reiterate that the withdrawal of the U.S. forces from Iraq does not override the responsibility of the United States to protect the residents of Camp Ashraf.

During Obama’s presidency, there have been two massacres at Camp Ashraf.

Based on the video clips and definitive evidence, if it were not for the orders of their superiors, U.S. forces could have averted the catastrophes.

As Governor Rendell has said it before, they were told to abandonee their responsibilities and thus allowing the massacre to occur.

The US administration handed over the protection of Ashraf to a proxy of the Iranian regime, knowing full well that the Iraqi government was intent to cracking down on the residents.

The United States also reneged on the agreement it signed with each and every resident of Ashraf to protect them.

In addition, through the unlawful delay in removing the People’s Mojahedin from the terrorist list, the U.S. government has provided a pretext to the Iraqi government to launch another attack on the residents.
As General Shelton has said the US has all the means to resolve the issue of Ashraf.
Senator Torricelli; you were right to say that if US submit to the demand of the Mullahs to eliminate the residents of Ashraf it will not be the last demand of the mullahs. It will further embolden them.

Therefore, as distinguished American policy makers have declared time and again, American voters and their elected representatives must hold their own government to account. They should ask:

– Why has the U.S. government used tax-payers money to provide the Iraqi army with weapons and Humvees to be used in the massacre of Iranian dissidents?
– Why does the Obama administration nominally oppose the mullahs but in practice empowers them by exerting pressure on the Iranian opposition?

As far as the Iranian people are concerned, the U.S. government must be told that it must see itself accountable to the blood that has been unjustly spilled in Camp Ashraf and that it must abide by all its responsibilities to protect the residents of Camp Ashraf.

A solution to the Ashraf crisis is within reach.

This solution is a thousand times more simple and easier than the one in Benghazi because it neither needs a military intervention nor colossal expenditure. The solution is taking this case to the UN Security council in order to station UN Blue Helmets and a permanent monitoring team at Ashraf to protect them until their resettlement in third countries.
This is the precise responsibility of the UN Secretary General, the US and the EU.

We urge the world community to stand with the Iranian people and their resistance.
We call on them to act to save the lives of thousands of innocent and defenseless men, women and children.

Especially when Arab Spring is blossoming and advancing in the region, confronting the mullahs dictatorship and supporting the organized resistance of the Iranian people is more than ever necessary.