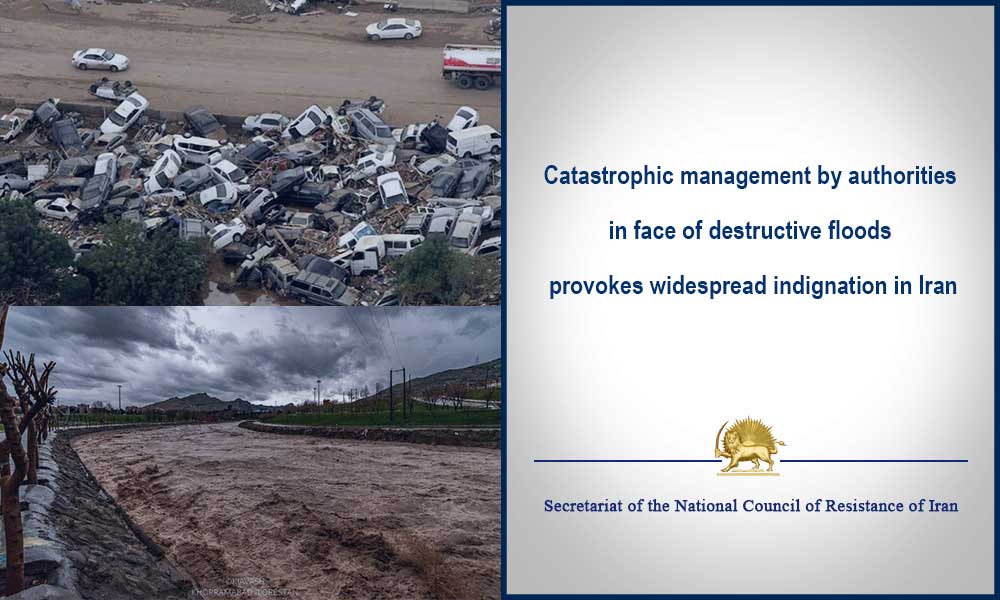 While heavy floods have devastated several regions in Iran and the people cannot hold back their anger at the lack of relief and the role of the authorities in destroying the country’s infrastructure – which have greatly contributed to worsening the consequences of this natural disaster – Revolutionary Guards (IRGC) and other repressive bodies are mobilized to prevent popular protest movements instead of rescuing the affected population. At the same time, the regime is trying to hide the real number of victims.

The Deputy Commander of the State Security Forces, IRGC General Ayoub Soleimani, said today: “Ensuring security is our most important task in the devastated areas (…) The deployment of fixed and mobile patrols, with the collaboration of Bassij (militia) and IRGC, as well as the installation of checkpoints in many places, are measures that must be taken with all the necessary means to prevent crimes and possible damage.”

Today, heavy rain and strong winds have caused massive floods in most Iranian southern and western provinces. In Shiraz, part of the city was flooded, including the Ghoran Gate and the Vakil Bazaar, located in the city’s historic center, causing many casualties. As the regime advances the figure of 17 killed, it is estimated that the actual number of victims is much larger and increases every hour. The power of the torrents was so much that hundreds of vehicles were washed away.

The obvious negligence of officials has made mullahs’ Member of Parliament Kouroch Karampour say that those responsible for the mismanagement of the crisis must be brought to justice.
This is not the first time that Shiraz is facing heavy rainfalls. However, in recent years, the non-regulatory construction of roads and buildings by the IRGC and other bodies of the regime have resulted in obstructing the traditional network of rainwater that protects the city for hundreds of years, and allowed the overflow of water through the main gate of the city.

The residents of Shiraz insist that provincial authorities have not taken recent weather warnings seriously and have not evacuated residents or banned traffic through the Ghoran gate.
In addition to the province of Fars, dozens of people have also lost their lives or been injured in the provinces of Lorestan, Khushistan, Sistan-Baluchestan, Isfahan, Bushehr, Ilam, Kermanchah, Golestan and other parts of the country.
In Sarpol-Zohab, a city hit last year by an earthquake, the floods washed away the tents and prefabs of a population that had already been severely damaged, neglected by the regime.
The situation in the city of Ahvaz is critical, with a strong flood of the river Karoun. As in Lorestan, where the Poleh-Dokhtar River has overflowed.

Maryam Rajavi, expressed her condolences to the affected population and called the youth to protest against the calamitous management of the crisis by the authorities and to force the regime to make available to the population the resources and the equipment of the IRGC so that they can intervene themselves to prevent other disasters especially at the Karaj dam, in Tehran and in the city of Karaj.

Maryam Rajavi affirmed that the mullahs’ regime and its corrupt leaders as well as its Pasdaran Army (IRGC) have intensified to the utmost the effects of this destructive flood through the destruction of the environment, and have rendered the Iranian cities and villages to ruins by plundering the people’s belongings and wasting them in projects of repression, terrorism and war mongering as well as anti-Iranian nuclear and missile programs, depriving them of the least infrastructure to defend against natural disasters like earthquakes and floods.

Secretariat of the National Council of Resistance of Iran
March 25, 2019