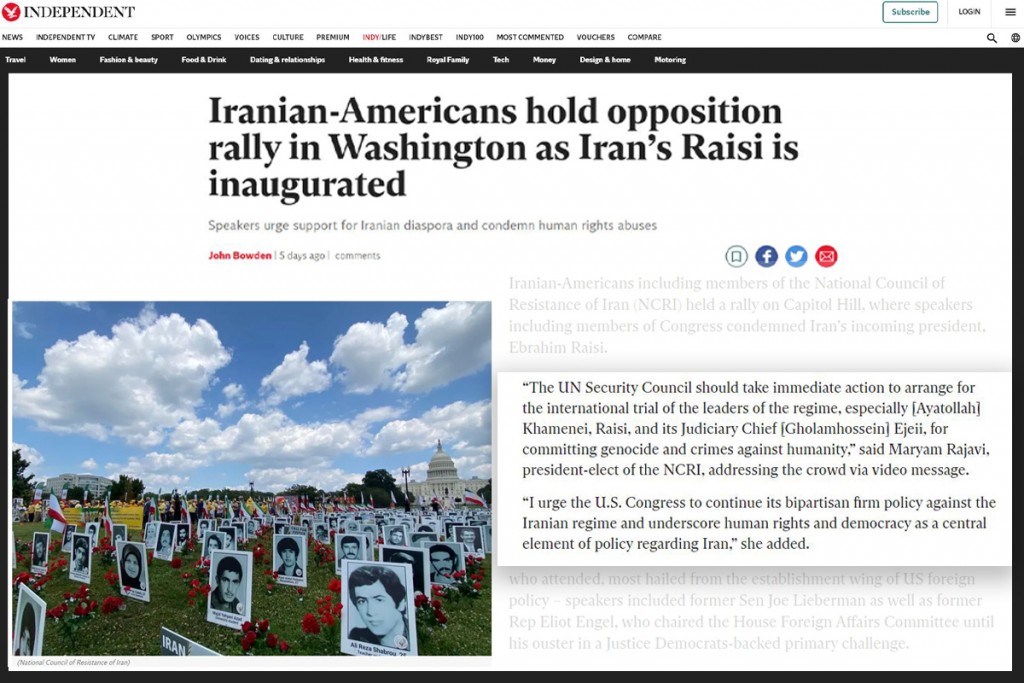 At a gathering in Union Square on Monday, Iranian-Americans who had seen family members killed by Iran’s government for various alleged crimes erected a memorial showing the faces of hundreds of those killed.

In fiery statements to the crowd, speakers including both Iranian-Americans and prominent figures from Congress and the US political sphere condemned Mr Raisi and called for him to face international human rights charges.

Of the current and former members of Congress and other US dignitaries who attended, most hailed from the establishment wing of US foreign policy – speakers included former Sen Joe Lieberman as well as former Rep Eliot Engel, who chaired the House Foreign Affairs Committee until his ouster in a Justice Democrats-backed primary challenge.

“The UN Security Council should take immediate action to arrange for the international trial of the leaders of the regime, especially [Ayatollah] Khamenei, Raisi, and its Judiciary Chief [Gholamhossein] Ejeii, for committing genocide and crimes against humanity,” said Maryam Rajavi, president-elect of the NCRI, addressing the crowd via video message.

“I urge the U.S. Congress to continue its bipartisan firm policy against the Iranian regime and underscore human rights and democracy as a central element of policy regarding Iran,” she added.

Mr Lieberman called for Iran’s incoming president to go before the Hague and face charges of crimes against humanity, and rejected the legitimacy of his election, which other attendees stressed to The Independent was the target of widespread boycotts.

“We cannot remain silent on these crimes against humanity,” Mr Lieberman said of killings of dissidents linked to Mr Raisi and other figures in Iran’s government.