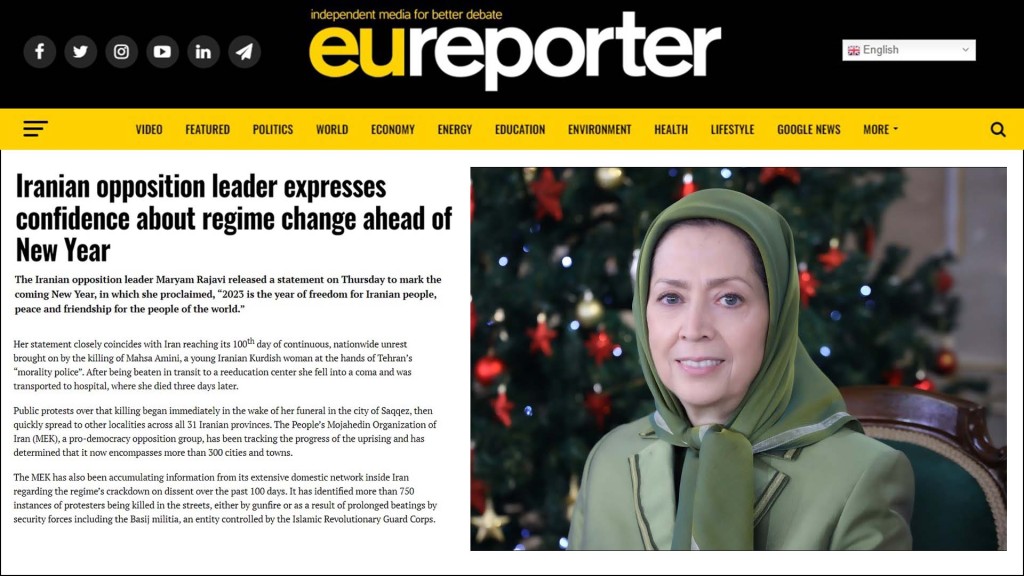 The Iranian opposition leader Maryam Rajavi released a statement on Thursday to mark the coming New Year, in which she proclaimed, “2023 is the year of freedom for Iranian people, peace and friendship for the people of the world.”

Her statement closely coincides with Iran reaching its 100th day of continuous, nationwide unrest brought on by the killing of Mahsa Amini, a young Iranian Kurdish woman at the hands of Tehran’s “morality police”. After being beaten in transit to a reeducation center she fell into a coma and was transported to hospital, where she died three days later.

Public protests over that killing began immediately in the wake of her funeral in the city of Saqqez, then quickly spread to other localities across all 31 Iranian provinces. The People’s Mojahedin Organization of Iran (MEK), a pro-democracy opposition group, has been tracking the progress of the uprising and has determined that it now encompasses more than 300 cities and towns.

The MEK has also been accumulating information from its extensive domestic network inside Iran regarding the regime’s crackdown on dissent over the past 100 days. It has identified more than 750 instances of protesters being killed in the streets, either by gunfire or as a result of prolonged beatings by security forces including the Basij militia, an entity controlled by the Islamic Revolutionary Guard Corps.

The deadly crackdown has prompted the Iranian opposition and its supporters to reiterate longstanding calls for action by Western powers, including calls for the IRGC to be designated as a terrorist group. The US State Department imposed just such designation in 2018, and both the United Kingdom and the European Union have discussed following suit, but have yet to do so. The MEK has urged similar proscription of the Iranian Ministry of Intelligence and Security, as well as generally expressing support for a broader sanctions regime targeting Iranian terrorists and human rights abusers.

Mrs. Rajavi’s message for the New Year alluded to the prospect of renewed discussion of these proposals when it suggested that 2023 could be “the year of expanding international solidarity with the Iranian people’s uprising.” However, she only explicitly asked that Western powers express that solidarity by recognizing as legitimate “the Iranian people’s struggle to overthrow the mullahs’ theocracy.”

Despite its initial focus on forced veiling laws and the killing of Mahsa Amini, the ongoing uprising has been widely recognized as one of the greater ever challenges to the ruling system and as an expression of popular demands for regime change. Slogans like “death to the oppressor, whether the shah or the supreme leader,” underscores that the people’s collective ambition is specifically to establish a new, democratic form of government.

The framework for that new government exists in the form of the National Council of Resistance of Iran, a coalition led by the MEK which has designated Maryam Rajavi to serve as transitional president following the mullahs’ overthrow. She in turn has promoted a 10-point plan for Iran’s future which sets the stage for free and fair elections, separation of religion from the state, and equal protection before the law for women and minorities.

Thursday’s message conveyed the growing expectation among Iranian opposition activists that they will have an opportunity to implement Rajavi’s plan in the year to come, after the regime’s efforts to suppress dissent fail in the presence of international support for the pro-democracy uprising.