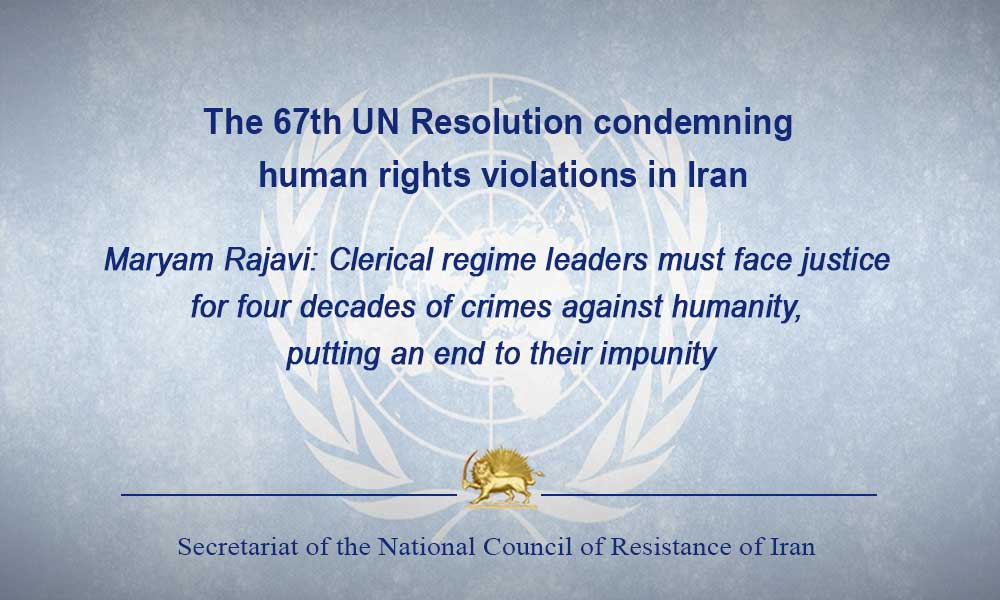 Maryam Rajavi: Clerical regime leaders must face justice for four decades of crimes against humanity, putting an end to their impunity

Welcoming the adoption of the 67th United Nations resolution, condemning the grave and systematic violation of human rights in Iran, Mrs. Maryam Rajavi, President-elect of the National Council of Resistance of Iran (NCRI), said that the main perpetrators of the atrocities mentioned in this resolution are those who have been continuously involved in crimes against humanity during that past four decades, particularly the massacre of political prisoners in 1988, the brutal suppression of the November 2019 uprising that leftover 1,500 protesters killed, and 12,000 arrested. She emphasized that in a situation where the religious fascism ruling Iran does not pay the slightest attention to the UN General Assembly resolutions, it is time for the Iranian regime’s human rights dossier to be referred to the UN Security Council and the regime’s leaders to be held accountable for four decades of crimes against humanity.

Mrs. Rajavi added that although this resolution covers only a small part of the regime’s atrocities, it leaves no doubt that the regime is the leading human rights violator in the world today, depriving the Iranian people of their fundamental rights in all political, social, and economic aspects, is in no way compatible with the twenty-first century, and must therefore be banished by the world community.

A recent report by UN experts on the 1988 massacre of political prisoners, referring to it as a “crime against humanity” and their call for an in-depth and independent investigation into the regime and the Iranian regime’s failure to adhere to its “obligations under the international human rights law” also indicate that this major crime must be referred to the UN Security Council. The current rulers of Iran, especially Khamenei, Rouhani, and Raisi, the regime’s Judiciary Chief, many ministers and judiciary officials as well as the executioners and officials of the Intelligence Ministry and the Revolutionary Guards who were involved in the murder of political prisoners in 1988 and throughout the 1980s must be brought to justice.

The resolution adopted with 82 affirmative votes, expresses serious concern “at the alarmingly high frequency of the imposition and carrying-out of the death penalty, [….] in violation of its international obligations, including executions undertaken against persons on the basis of forced confessions or for crimes that do not qualify as the most serious crimes, including crimes that are overly broad or vaguely defined, in violation of the International Covenant on Civil and Political Rights [….] the continued imposition of the death penalty against minors [….] in violation of the Convention on the Rights of the Child.”

The resolution also expresses concern over the use of “torture and other ill-treatments or unjust, inhuman and humiliating punishments [….] including sexual assaults and punishments that are severely unlevel to the context of the crime [….] and the commitments and international norms, including the UN minimum standard laws in treating the prisoners.” It also voices alarm at “the widespread and systematic use of arbitrary arrests and detention [….] the use of torture to extract confessions, such as in the case of Navid Afkari and others, and cases of suspicious deaths in custody, as well as long-standing violations involving the Iranian judiciary and security agencies, including enforced disappearances and extrajudicial executions, …. and suppression of “the right to freedom of expression and opinion, including widespread restrictions on Internet access and in digital contexts, and the right to freedom of association and peaceful assembly” and…. “harassment, intimidationو and persecution of political opponents, human rights defenders, and “all forms of discrimination and other human rights violations against women and girls in law and in practice,” and calls for the release of all those arrested during the November 2019 and January 2020 protests.

Secretariat of the National Council of Resistance of Iran (NCRI)
December 16, 2020