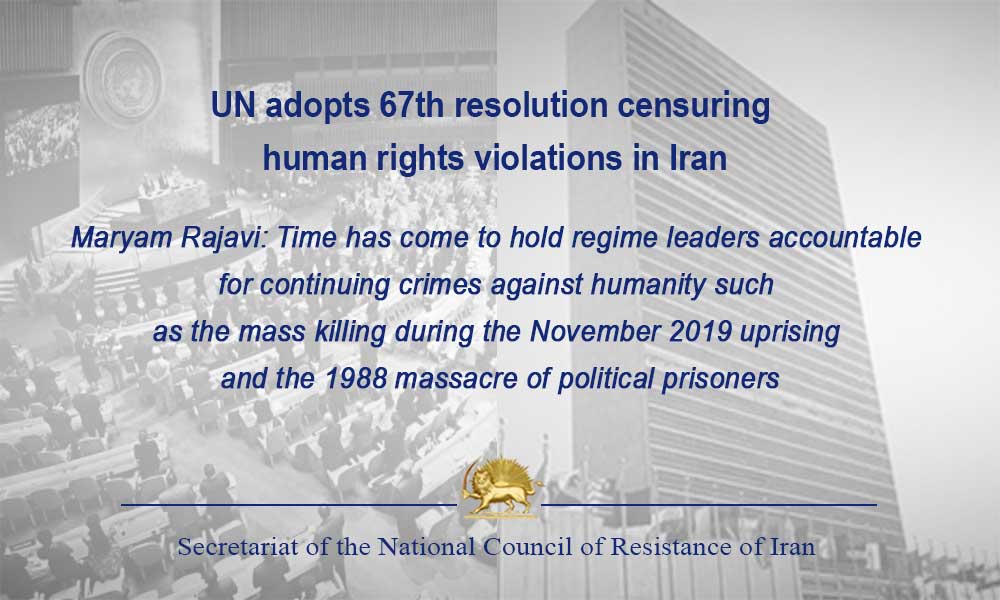 Maryam Rajavi: Time has come to hold regime leaders accountable for continuing crimes against humanity such as the mass killing during the November 2019 uprising and the 1988 massacre of political prisoners

Mrs. Maryam Rajavi, the President-elect of the National Council of Resistance of Iran (NCRI), welcomed the adoption of the 67th United Nations resolution condemning the grave and systematic violations of human rights in Iran.

Those responsible for the majority of the crimes to which the resolution has referred are the very people who turned the November 2019 uprising into a bloodbath, killing at least 1,500, including young people, wounding 4,000 and arresting 12,000 more. The same officials who have been continuously perpetrating crime against humanity for the past four decades, in particular the 1988 massacre of political prisoners, Mrs. Rajavi said.

The resolution, adopted with 79 affirmative votes, expresses serious concern “at the alarmingly high frequency of the imposition and carrying-out of the death penalty, [….] in violation of its international obligations, including executions undertaken against persons on the basis of forced confessions or for crimes that do not qualify as the most serious crimes, including crimes that are overly broad or vaguely defined, in violation of the International Covenant on Civil and Political Rights [….] the continued imposition of the death penalty against minors [….] in violation of the Convention on the Rights of the Child.”

The resolution also voices alarm at “the widespread and systematic use of arbitrary arrests and detention [….] the use of torture to extract confessions, such as in the case of Navid Afkari and others, and cases of suspicious deaths in custody, as well as long-standing violations involving the Iranian judiciary and security agencies, including enforced disappearances and extrajudicial executions, …. and suppression of “the right to freedom of expression and opinion, including widespread restrictions on Internet access and in digital contexts, and the right to freedom of association and peaceful assembly” and…. “harassment, intimidation and persecution of political opponents, human rights defenders, and all forms of discrimination and other human rights violations against women and girls in law and in practice.

Mrs. Rajavi noted that although this resolution has failed to address many aspects of the flagrant violations of human rights in Iran, it leaves no doubt that this regime is the world’s leading abuser of human rights today, has flagrantly trampled on the Iranian nation’s fundamental rights in all its political, social and economic aspects, and is in no way compatible with the twenty-first century, and must therefore be banished by the world community. She added that impunity for the criminal leaders of this regime should end and all of them must face justice for 40 years of crime against humanity.

The NCRI’s President-elect underscored that while a year has passed since the massacre of defenseless protesters in November 2019, the regime’s criminal leaders, terrified of domestic and international repercussions, continue to refuse providing the actual number of those killed, wounded, and arrested, and are brutally torturing those detained in medieval prisons to pressure

them to confess and take part in forced interviews. This horrific crime and the 1988 massacre of 30,000 defenseless political prisoners, in which the regime’s former and current leaders have been involved and continue to brazenly defend, are the most manifest cases of crime against humanity. The lack of action vis-à-vis continuing crime against humanity is a scar on the conscience of humanity. As such, an investigation into these two horrific mass murders and the prosecution of those responsible is the litmus test before the international community.

Secretariat of the National Council of Resistance of Iran
November 18, 2020