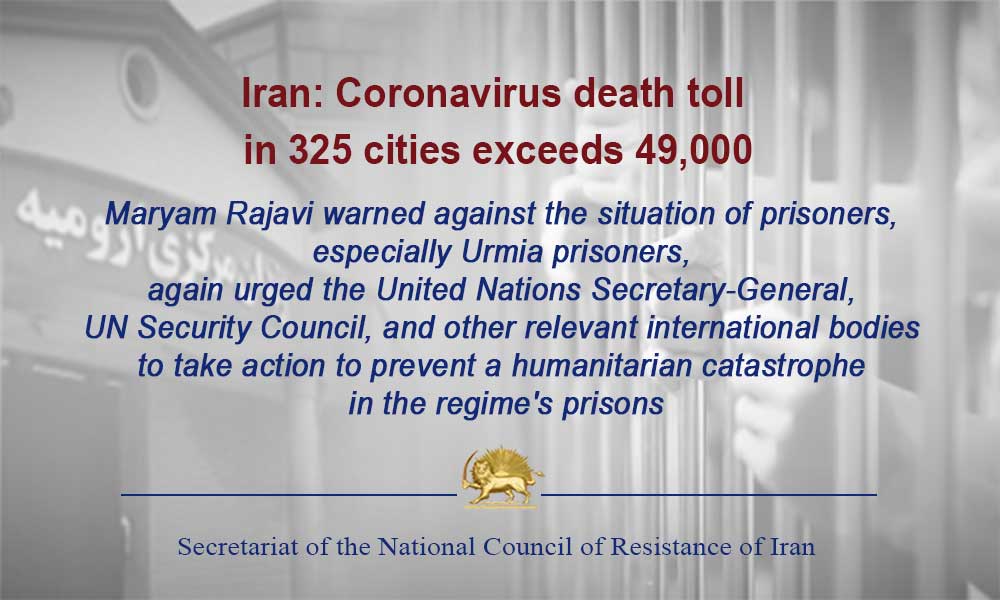 According to the University of Medical Sciences, the number of hospitalizations in Kermanshah yesterday was three-quarters of Tehran’s, with 14 million population.

In a statement, a spokesman for the Mullahs’ Health Ministry said that 70 people had died and 3,134 had contracted Coronavirus in the past 24 hours, adding that the situation in provinces of Hormozgan, East and West Azerbaijan, Kurdistan, Kermanshah, Bushehr, Sistan and Baluchestan, Qazvin, and Khorasan Razavi is alarming.

In Kermanshah, the statistics of those infected and hospitalized is shocking. The head of the information committee of Kermanshah University of Medical Sciences told the IRGC affiliated news agency, Fars, today, “Every day, the number of Coronavirus patients admitted in the Province exceeds 200. Yesterday 243 people were hospitalized.” This figure is about three-quarters of Tehran’s admitted patients with 14 million population, according to the regime’s statistics.

In Khuzestan, Ahvaz University of Medical Sciences reported 658 new cases of virus infection and 16 deaths in the past 24 hours, according to the state-controlled news site, Rouydad-24, yesterday. At the same time, the President of Abadan School of Medical Sciences also reported 63 new cases and five deaths in the past 24 hours, according to the IRGC affiliated website, Javan. The President of Shushtar University of Medical Sciences told the state official news agency, ISNA, today, “Last week we had the highest number of hospitalizations in Shushtar … It is expected that the trend of the Coronavirus outbreak will increase again in the next two weeks.”

In Hormozgan, Hossein Farshidi, the President of the University of Medical Sciences, told the state TV yesterday, “In cities like Bandar Abbas, we are looking to use hotels to quarantine the infected patients. Bandar Abbas and Minab have been declared red by the NCCT, and in our opinion, Roodan and Qeshm are also red. The cities of Hajiabad and Bandar Khamir are also considering declaring red. So far, 123 health care and medical staff in the Province have contracted with Coronavirus.”

In Fars, the President of Shiraz University of Medical Sciences told Fars news agency, yesterday, “We are facing a sudden increase in the spread of the virus and Fars Province has now reached the alerting stage.”

In Bushehr, the Deputy Governor told the state official news agency, IRNA, yesterday, “Today, we have set a record in the rate of infection, and if this trend continues, we predict, hitting higher and worse records.”

In Sistan and Baluchestan, today, the Governor of Iranshahr was quoted by the state-run news site, Tabnak, as saying, “Starting from today, the city’s market will be closed for ten days due to the spread of the Coronavirus transmission chain.”

At the same time, since last week, a large number of prisoners in all wards of central Urmia Prison have been suffering from severe symptoms of Coronavirus such as fever, shivering, throat dryness, losing the sense of taste and smell, and body pain. The wardens’ negligence caused the spread of the virus to all prisoners. Following repeated protests by prisoners, a few were tested, which came out to be positive, resulting in the transfer of some of them to the hospital. Urmia prisoners are deprived of the minimum sanitary materials, such as soap and disinfectants. These materials were being sold to prisoners at a very high price while most cannot afford to buy them.

Mrs. Maryam Rajavi, the President-elect of the National Council of Resistance of Iran described the increasing trend of the Coronavirus nationwide as the direct result of the clerical regime’s criminal and inhuman policies. She said Khamenei and Rouhani are the first among officials responsible for our compatriots losing their lives on such a vast scale. Mrs. Rajavi warned about the situation of prisons in Iran and again called on the United Nations Secretary-General, the Security Council, and other relevant international agencies to act to thwart the humanitarian catastrophe developing in the regime’s prisons.

Secretariat of the National Council of Resistance of Iran (NCRI)
June 3, 2020