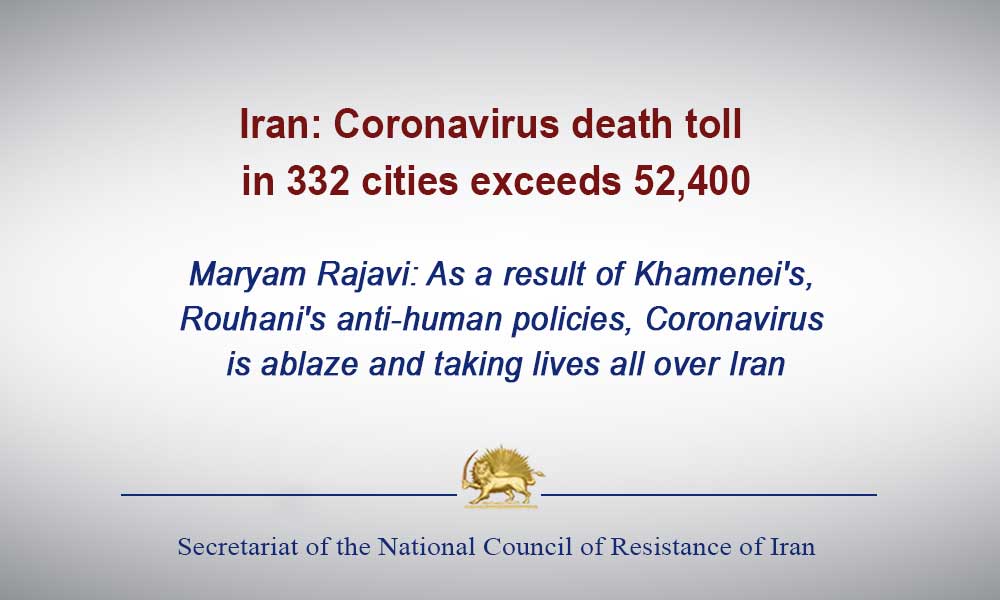 Maryam Rajavi: As a result of Khamenei’s, Rouhani’s anti-human policies, Coronavirus is ablaze and taking lives all over Iran

• Iraj Harirchi, Deputy Health Minister: We have experienced 107 and 113 (deaths) in the past couple of days, the daily toll during the eight-year Iran-Iraq war was 66 per day.

• Ali-Akbar Haghdoost Deputy Health Minister: An urgent decision must be made to return the restrictions, Coronavirus is on the rise

• In Sanandaj, from Sunday to Monday, the number of hospitalized patients increased from 287 to 336

The spokesperson for the regime’s Health Ministry quoted by the official state news agency, ISNA today, announced 2,563 new Coronavirus infections, and 115 deaths in the past 24 hours, bringing the total number of critically ill patients to 2,815. She declared, “Kurdistan and Sistan and Baluchestan are in a red situation.”

Iraj Harirchi, the regime’s Deputy Health Minister, told ISNA yesterday that the regime’s fatalities in the eight-year war with Iraq were 66 per day. In contrast, in the past two days, the death toll from the Coronavirus had risen to 107 and 113, respectively. Today he added, “We don’t have any province where we don’t have to worry about the disease. The only virus-free place is Abu Musa Island (Persian Gulf). In the past few days, we have again seen a three-digit death toll for Coronavirus, which is high. Government decision-makers may decide to return the restrictions, and that is when many will suffer economically without being at fault,” reported ISNA, on June 16, 2020.

Ali-Akbar Haghdoost, another Deputy Health Minister, told IRNA today, “An urgent and serious decision must be made to return the restrictions … The Coronavirus epidemic is on the rise … The Health Ministry has formally demanded to re-impose the restrictions, especially in areas where the virus outbreak is high …The Coronavirus epidemic situation in the country is not normal at all.”

Hamid Suri, a member of the National Coronavirus Combat Taskforce (NCCT), told IRNA today, “Every day and every week we are witnessing a rise in the (Coronavirus) epidemic in different provinces… As an epidemiologist, I must say that with the continuation of the current situation, we will not be able to minimize the epidemic’s impact … Every day of the week, the epidemic’s peak erupts at a different location. Naturally, until we reach a level of collective immunity, society must pay a huge price … Some of the actions were not fast enough to get a better result.”

Deputy Governor of West Azerbaijan, Ali Mostafavi told Hamshahri daily, today, “There is a concern in cities about the return of the second wave of the disease, the most important proof of which is the death of 15 people a day (in the Province).”

The head of the group of deputies from Khuzestan in the regime’s Parliament told Entekhab daily yesterday, “One-third of the new Coronavirus infections is in Khuzestan…Now the capacity of Khuzestan’s ICUs is full. The wards are overloaded, and the staff exhausted.”

In Kermanshah, the Governor, quoted by IRNA news agency today, described the situation in the Province as stressful and worrying. He said, “Today, the number of those hospitalized due to Coronavirus in Kermanshah has exceeded 400 and puts us in a worrying situation … We have proposed a 10-day lockdown of government offices. The prevalence of Coronavirus in some areas of the Province, including Uramanat, is red. To prevent further spread of the virus, traffic in the Uramanat area is prohibited from June 16 to Saturday morning, June 20.”

In Kurdistan, the president of the Medical Sciences University was quoted by IRNA as saying today, “Whereas the number of those hospitalized in Sanandaj on Sunday was 287, this figure had reached 315 until noon yesterday and 336 until last night. Coronavirus is spreading with a steep upward slope in Sanandaj… Even if we were to utilize the country’s entire resources, we could not confront this disease.”

In Bushehr, Deputy Governor told IRNA today, “At a time when the number of those infected was one or two, it would be announced. But now, while the number reaches several hundred a day, it is not being announced…. People must know that in 24 hours, several hundred become infected in the Province.

In Hamedan, Deputy Governor told ISNA yesterday, “The cities of Famnin, Kabudar Ahang, and Nahavand are red… Other cities are in a yellow state… We are witnessing the rise in the number of those testing positive in the Province.”

In Lorestan, the head of Borujerd Health and Treatment Network was quoted by ISNA as saying yesterday, “The virus is advancing rapidly. We should only confront it. We must move from taking health precautions to treatment because the yardstick for health precautions is quarantine, which we do not have in the country.”

Mrs. Maryam Rajavi, the President-elect of the National Council of Resistance of Iran (NCRI), reiterated that now everyone can see that because of the inhuman policies of Khamenei and Rouhani, Coronavirus in burning the entire country and taking lives.

Secretariat of the National Council of Resistance of Iran (NCRI)
June 16, 2020