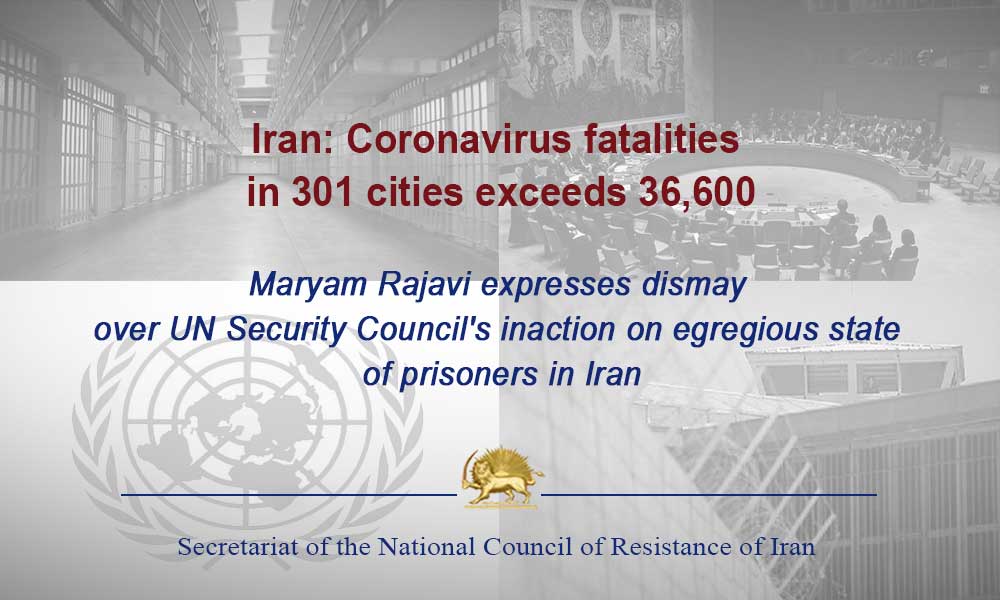 Political prisoners have contracted Coronavirus, but the regime is neither releasing, nor quarantining, nor treating them. It has practically condemned them to death by attrition while embarking on a spate of hangings inspite of holy month of Ramadan to intimidate and terrorize society

Following Hassan Rouhani’s whitewashing, and less than 24 hours after the Health Ministry’s declaration of 127 cities as virus-free (white) zone, today, Alireza Raisi, the Deputy Health Minister explicitly said that the capitals of 31 provinces are considered red areas and this is in addition to at least one other city in each province. He told the official state news agency, IRNA, “There are 60 cities with the highest incidence of the disease in 31 provinces, including the provincial capitals. There are several other places where the incidence is high. There are several places in Lorestan, Khuzestan, Tehran, Isfahan, and Shiraz (provinces). In most provinces, at least one city is in a red state in addition to the provincial capital …which is not a small population. On the contrary, the white zones (virus-free) areas are about 116 counties, with a total population of about 15 million. Therefore, most parts of the country are still infected with the virus.”

Today, Mahboubfar, a member of the National Coronavirus Combat Taskforce (NCCT), described the status in the country as “red” and told state-run daily Vatan-emroz: “The current rate of the corona is 20 times higher than what is announced by the Ministry of Health and this has caused the citizens not to take this deadly disease seriously. So far, only 6 percent of the people who have contacted Coronavirus have been identified in the country… In lifting restrictions on social movements, the government acted very prematurely and preferred bread to health, which of course, such hasty decisions, would have negative consequences in the coming weeks. Through the continuation of such indifferences, it is expected that in the third week of Ordibehisht (4th week of April), the second wave of the coronavirus outbreak will engulf the country”.

While yesterday, the Health Ministry declared ten cities in Kerman province as white zones, Mehdi Shafiei spokesperson of Kerman University of Medical Sciences told the official state news agency, ISNA, “With the statistics that we see daily, we do not have a decreasing trend of Coronavirus infection in Kerman Province, and I do not think that Kerman Province is in a white situation.”

According to Hamshahri newspaper, Qassem Soleimani Dashtaki, governor of Ilam, “in reaction to the sudden rise in the number of people infected with the Coronavirus appealed to people for their cooperation and said, if the people do not cooperate, the situation will become more difficult.” The daily added, “Disregard in Ilam province has led to an increase in the number of people infected with Coronavirus. Busy and overcrowded bazaar has suddenly increased the number of infected in Ilam to 17 per day, which is worrying considering the population of Ilam” (Hamshahri, May 27).

Changiz, Isfahan’s Medical Sciences University Chancellor expressed concern over the second wave of Coronavirus. “Aside from Kashan, 12,000 have been hospitalized, and 700 have died in hospitals controlled by the University, in Isfahan Province. The number of the dead and infected in Kashan relative to its population is very high, and the situation of this city is almost similar to Qom and Gilan,” he told the Tasnim news agency on April 26.

Parliament deputy for Aligoudarz, Khodabashi, told Aftab-Yazd today, “The Ministry of Health must examine the reason for the high number of deaths in Aligoudarz. But one reason is the lack of anesthesiologists at hospitals. Another reason is the low number of tests. The percentage of infection and spread is still high… These foundations (like the Mostazafan Foundation) can definitely help, but they have not offered any help to alleviate the situation in Aligoudarz.”

In another development, the situation of prisons as it relates to the spread of COVID19 is very dire. Most prisoners in Evin Prison’s Ward four have been infected with Coronavirus and are suffering from dry cough, fever, shivering, and diarrhea.

Mrs. Maryam Rajavi, the President-elect of the National Council of Resistance of Iran (NCRI), expressed dismay over the United Nations Security Council’s inaction about the egregious state of prisoners in Iran. She said: Political prisoners in Evin and other prisons have contracted Coronavirus, but the regime is neither releasing, nor quarantining, nor treating them. This is death by attrition. Simultaneously, the regime has embarked on successive hangings even in the month of Ramadan to intimidate and terrorize the people, including today’s hangings in Urmia and Sanandaj prisons

Mrs. Rajavi again urged the international community, especially the Security Council, to act to stop the executions and secure the release of prisoners, particularly political prisoners. She added: Silence vis-à-vis the atrocities perpetrated in prisons by the clerical regime is tantamount to disregard for humanitarian principles that humankind has offered millions of victims.

Secretariat of the National Council of Resistance of Iran (NCRI)
April 28, 2020