Maryam Rajavi: Nordic countries must recognize the right of Iranian people for resistance to overthrow the mullahs’ regime 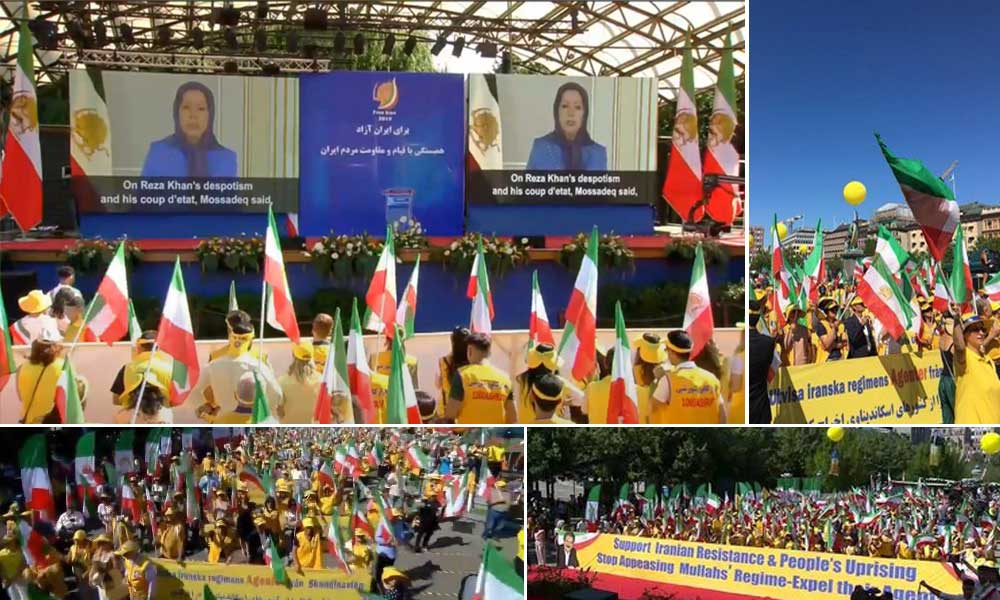 Fellow compatriots, friends of the Iranian Resistance,
You are the voice of resistance units and the National Liberation Army around the world,
Fellow Iranians who have risen to liberate your people from repression, destitution and injustice,
I salute you all.
I am truly grateful and sincerely appreciate the lawmakers, and the human rights and women’s rights advocates who have joined you for freedom and democracy in Iran and for a free Iran.

Fellow citizens,
Tomorrow is July 21, the 67th anniversary of our people’s national uprising where people chanted, “We give our lives to bring back Mossadeq.” He embodied Iranian people’s sovereignty in the face of the monarchic dictatorship and the reactionary mullahs.
It is also the 38th anniversary of the foundation of the National Council of Resistance of Iran, announced by Massoud Rajavi on July 21, 1981, in Tehran.
Indeed, Massoud has safeguarded Mossadeq’s name and memory in Iran’s contemporary history, and followed and improved his path since when he was in torture chambers, during his trial and up until today.
This has been especially valuable at a time when Khomeini expressed gratitude for what he described as “the slapping of Mossadeq” by the reactionary mullahs and colonialists. He openly admitted that he could not tolerate meetings held in honor of Mossadeq, saying, “If someone nationalized the oil, it is no reason for people to set aside Islam to defend him.”

Really, what was the message of Mossadeq?
On Reza Khan’s despotism and his coup d’etat, Mossadeq said, “Is it possible to make a revolution and lead people in the right direction with the help of a Kazakh brigade taking orders from foreigners? Could anyone become a revolutionary or claim reforms by issuing a hollow statement? Which insightful person is deceived by such talks?”
In another place, he added, “Do not turn in the standard-bearers of freedom to the executioners who serve reactionary fundamentalism.”
Our salutes to Mossadeq, to the martyrs of the uprising on July 21, 1952, and their successors in history up to this date.
And this is a path the will be paved in the resistance for freedom until final victory and achieving a free Iran; a prospect that is becoming brighter every day.

Fellow citizens,
By displaying your remarkable determination and resolve, and the wide scope and dynamism of this movement which extends from resistance units in cities across Iran to the grand gatherings and rallies in various countries of the world, you have demonstrated the Iranian nation’s grim will for the overthrow of the mullah’s dictatorship.
The time has come for putting an end to the appeasement of the religious fascism in Iran. There are no more excuses for overlooking the enemy of the people of Iran.
No longer can anyone claim that the regime has no alternative, and that this regime is better for the people of Iran.
No longer can anyone set their sights for 8 years on Rafsanjani’s moderation, and 8 years on reforms by Khatami, and another 8 years on moderation of Rouhani who has repeatedly declared that he kisses the hands of Khamenei and his Revolutionary Guard Corps.
Then you wake up late and see that the clerical regime is only one year away from the nuclear bomb, has gained strongholds in Iraq, Syria and Yemen and has a missile program which it says is non-negotiable.
Indeed, has the clerical regime left any room to hope for the slightest accountability for human rights, for freedom of speech, for justice, for gender equality, or for the rights and autonomy of ethnic groups and religious minorities?

The myth of moderation of this regime, illusions about any likely reforms in it, and constructive and critical dialogue with it, no longer deceive anyone. The Iranian Resistance has paid the heaviest price to prove that such claims are but hollow.
Unjust designations of the PMOI and the Iranian Resistance no longer have any impact.
The roaring blood of the martyrs and the Iranian people’s steadfastness and uprisings have driven the Velayat-e Faqih regime to the end of the line. It has brought about a disgraceful defeat for the policy of appeasement of the mullahs’ evil rule.
Conscientious human beings from across Europe and Scandinavia have always recalled the bitter experience of appeasing fascism, namely the Nazi invaders, in confronting the religious fascism in Iran.
At this point, I would like to salute Gunnar Sønsteby, Norway’s resistance fighter and war hero. He supported the Mojahedin of Ashraf and described the determined and steadfast men and women of Ashraf as living examples of an epical resistance.
He used to tell us, “To achieve democracy and freedom, one must always fight on and on and on.” He used to say, “I know that when someone fights for freedom, he/she is called terrorist. Just as German fascists called me and my friends terrorists; they followed us and wanted to execute us.”
So, we have always kept in mind Gunnar’s brilliant advice that “one must always fight on and on.”
We should not let the dignity of resistance for freedom which has created heroes like Gunnar be tarnished with commercial and trade interests.
The people of Iran expect Europe which has suffered tremendously in the past century from the reign of Hitler’s fascism, to understand and feel the suffering of Iranian people today. Europe should side with the desires of Iran’s nation.

Now that Finland is president of the European Union, it must focus EU sanctions on the regime’s main levers against freedom, and against its terrorism and suppression, namely Khamenei’s office, the Revolutionary Guard Corps (IRGC) and the Ministry of Intelligence and Security (MOIS).
The regime’s mercenaries must be tried, punished and expelled.
I specifically urge the governments of Sweden, Norway, Denmark and Finland to pressure the Iranian regime to open its prisons to visits by an international fact-finding mission.
Nordic countries, all the Europe, and the world must recognize the right of the people of Iran for resistance to overthrow the clerical regime and establish democracy and popular sovereignty.
Yes, freedom will prevail,
Iran will be free,
With your support, a free Iran is on its way,
Hail to you all.