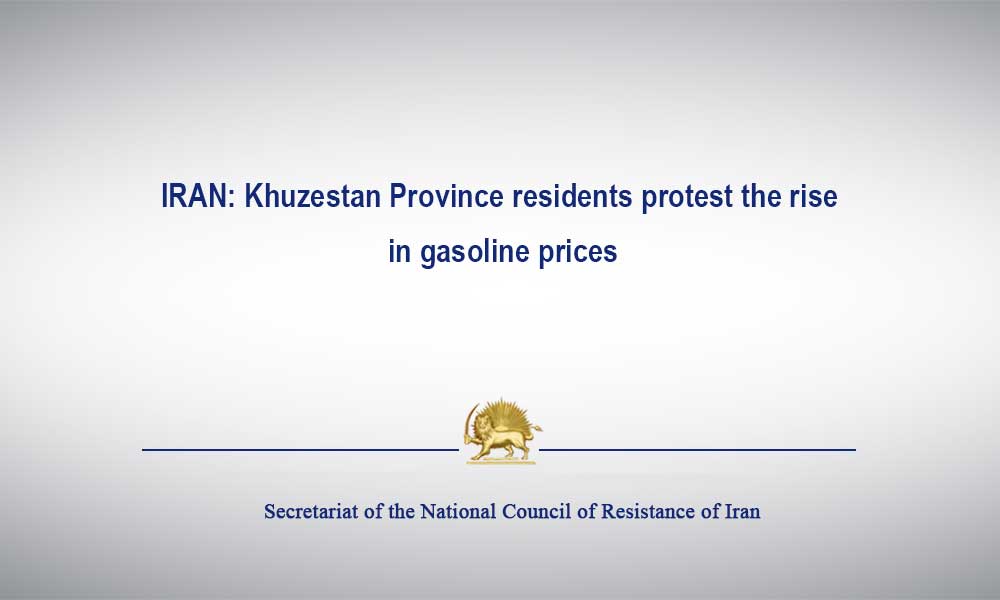 Terrified of the outbreak of popular uprisings, the regime had put the State Security Force, the Ministry of Intelligence and Security, the Judiciary and other suppressive forces in different cities on full alert since five days ago.

The defiant youths blocked Ahvaz-Andimeshk and Shushtar-Dezful highways by setting tires on fire. In Khorramshahr a large group of people staged a protest in the city’s Allah Square. The mullahs’ regime had dispatched herds of anti-riot forces to Ahvaz, Andimeshk Highway.

To prevent the spread of these protests, anti-riot forces riding on motorcycles attacked the crowd in Ahvaz, beating many of them and arresting several.

In Mahshahr, the local residents and young people lit fires in the streets and blocked the roads. In Taleqani township, the protesters blocked the streets, preventing cars from going to petrol stations. In Behbahan, the protesters were chanting, “Iranians will die, but will not accept humiliation,” “Gasoline has become more expensive, the poor have become poorer.”

Mrs. Maryam Rajavi, the President-elect of the National Council of Resistance of Iran (NCRI) hailed the people of Khuzestan, who have arisen to protest the rise in gasoline prices, and called on the young people to join the ranks of the protesters. She emphasized that this would be the only way to get rid of high prices, poverty, inflation and calamities the mullahs’ regime has inflicted on the Iranian people. Mrs. Rajavi added that by tripling gasoline prices, the mullahs further impoverish the people. The economic lifeline is controlled by [regime’s Supreme Leader] Ali Khamenei, Hassan Rouhani and the billion-dollar thieves working with them. They pillage the people’s wealth for warmongering, unpatriotic nuclear & missile programs to usurp people’s sovereignty, the NCRI President-elect said.

Secretariat of the National Council of Resistance of Iran
November 15, 2019