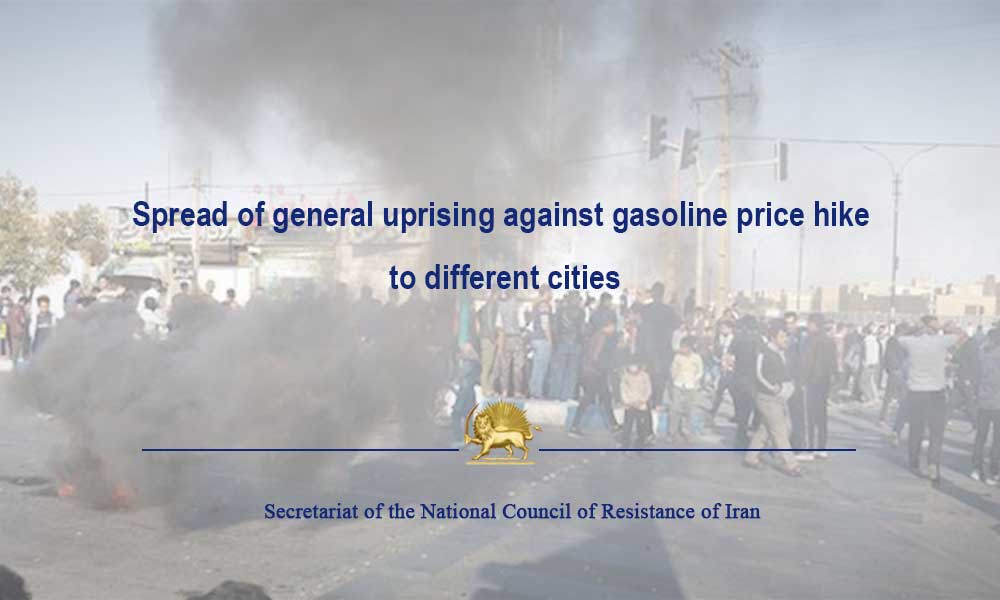 The people of Tehran braved the snow and switched off their vehicles on Hakim Expressway, chanting “Death to the dictator,” “Dignified Iranians, support, support.” In Tehran Pars, a large number of people came out on to the streets and chanted anti-regime slogans. Terrified of the spread of the protests to other parts of Tehran, the regime stationed dozens of agents riding on motorcycles, as well as herds of State Security Force members, intelligence and plainclothes agents at Enghelab Square and other sensitive locations.

Tehran-Karaj highway was blocked on both ends. A large number of people in Karaj switched off their vehicles and shut down the street leading to Molla Sadra shopping mall and Beheshti Street.

In Tabriz, a large group of people blocked the Expressway and clashed with the State Security Force, chanting slogans against them, calling them “scoundrel, scoundrel”. The protesters gathered in Fahmideh Square and chanted anti-regime slogans. In Ardabil, people parked their cars in the city’s main streets, including Chahar-Rah Street and Shariati Square, and staged a protest.

In Sanandaj, the people switched off their vehicles and chanted anti-regime slogans. Suppressive force riding on motorcycles attacked the protesters and wounded several of them. In Kermanshah, people gathered in the city’s Azadi Square and chanted slogans against the regime’s leaders. In Javanroud, young people sat on the streets on masse.

In Shiraz, the people gathered at Zendan (Prison) Junction and chanted anti-regime slogans. They also blocked Shiraz Industrial Township beltway. The people also gathered in Kashan, Ma’ali-abad, Afif-abad, Molla Sadra, and Zand townships. In the city’s major industrial township, the people switched off their cars and blocked both sides of the streets.

They also set fire to a number of suppressive centers including two paramilitary Bassij bases. In Nurabad Mamasani the people have come out and chanted anti-regime slogans.

In Isfahan, the people stopped their cars in Agha-Babaii expressway and staged a protest.

In Bushehr, the residents stopped their cars in the streets and staged a strike. A number of people gathered outside the Governor’s Office. The young people clashed with the State Security Force and chanted, “Scoundrels, Scoundrels.” The regime tried to disperse the crowd by using water cannons.

In Bandar Rig, in Bushehr Province, the people blocked the Bandar Rig T-Junction and prevented the trucks from taking their loads. In Mahshahr, the youth blocked Mahshahr – Khor-Moussa highway by setting tires on fire.

In Chabahar, the people blocked the streets, set fire to tires and chanted anti-regime slogans. The street closures caused heavy traffic. The suppressive forces attacked the people and seized their mobile phones to prevent them from taking videos and photographs.

In Kangan, also in Bushehr, the people staged protests and chanted, “Rouhani shame on you, let go of the country.” In Abadan, young people blocked the Shadegan-Abadan highway and set fire to tires. In Gachsaran, the residents switched off their cars and staged protests in the streets. In Andimeshk, the people chanted, “Neither Gaza, no Lebanon, I give my life for Iran.” In Iranshahr, southeast, the youth set fire to tires and blocked the city’s streets.

In Behbahan, the people parked their cars in the streets and staged protest gatherings. The suppressive forces fired bird shots to disperse them. Chanting “Death to Khamenei,” the people clashed with them and set fire to several regime centers, including the Melli Bank. In Bojnourd, northeast, the people blocked Vakil-Abad Blvd by switching off their cars.

Last night, the people of Birjand, especially the youth, staged a demonstration, chanting “Iranians, enough is enough, show your dignity,” “have no fear, we are all together.”

Mrs. Maryam Rajavi, the President-elect of the National Council of Resistance of Iran (NCRI), hailed the Iranian people for rising up and called on the people, particularly the youths, to support the protesters. She said that so long as the mullahs remained in power, theft, plunder and looting of the people’s wealth would continue or squandered in warmongering, export of terrorism and nuclear and ballistic missile programs. Mrs. Rajavi urged the international community to condemn the clerical regime’s suppressive policies and support the right of the Iranian people to change the ruling theocracy and establish democracy and rule of law.

Secretariat of the National Council of Resistance of Iran
November 16, 2019