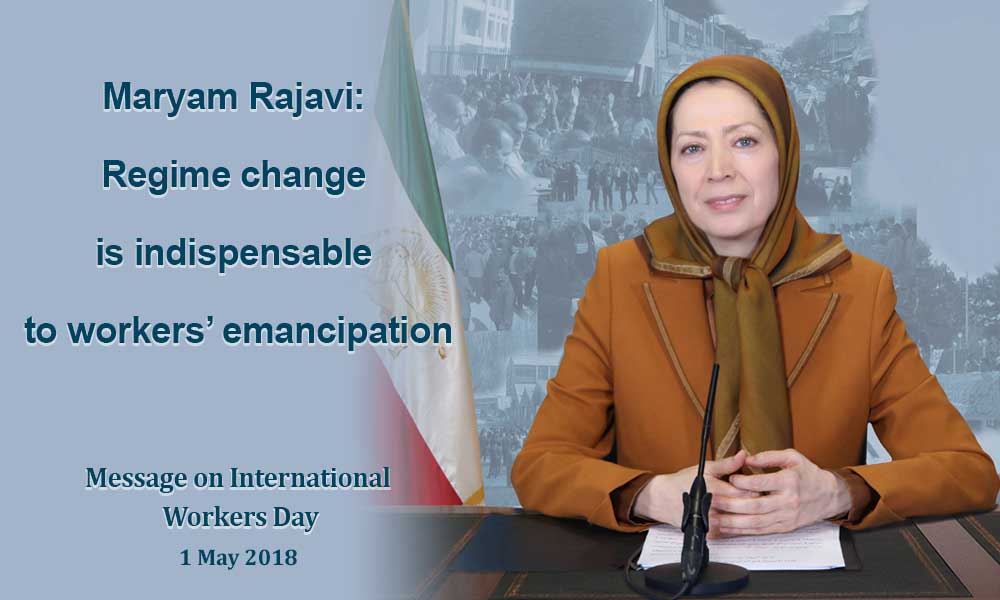 My fellow workers, sisters and brothers,
I would like to extend my sincere congratulations on the International Workers Day to each and every one of you. This day harbingers a bright future where workers are no longer exploited, plundered or oppressed but enjoy freedom, justice, equality and fraternity.

I would like to salute the workers who gave their lives for this lofty cause, those who embraced the pain of being imprisoned, losing their jobs and being deprived of their rights.

I hail Iran’s young workers and unemployed youths who took to the streets in the courageous uprisings of December and January, and especially those who gave their lives.

We extend our salutes to the farmers of Isfahan whose protests and demonstrations have been continuing for over two months.

Fellow workers,
The uprisings in December and January in 142 cities across the country heralded a bright horizon for the nationwide movement and particularly for the workers’ struggle for emancipation. Our country’s most conscious workers participated in large numbers in those uprisings and demanded regime change by their chants of “death to the dictator”, “death to Khamenei” and “death to Rouhani.”

The uprisings in December and January confirmed the validity of a solution that will eventually lead to emancipation of Iranian workers and the oppressed people of Iran and restitution of their rights. The solution is overthrow of the clerical regime which could be only realized by an organized uprising. This is the prospect heralded by the continuation and expansion of the protest movement. The protests of our Arab compatriots in Khuzistan and the residents of Kazeroon, and the strikes in cities across Kurdistan, Kermanshah, and West Azerbaijan in support of oppressed porters bespeak of our nation’s undeterred resolve for regime change.

Courageous workers of Iran,
Toppling the clerical regime is the first step towards emancipation of Iran’s workers. Every single day of the regime’s history since it seized power attests to this truth because the mullahs have eliminated all the rights and freedoms of Iranian workers with utmost cruelty.

Massoud Rajavi says, “Workers are subjected to the cruelest forms of exploitation and oppression in our country under the most inhumane conditions reminiscent of Middle Ages.”

The Iranian regime has left no windows open for restitution of workers’ basic rights. Today, even timely payment of their wages and salaries has become a far-fetched demand. Their wages are not paid for months and even more than a year. Workers have no way but to loan money and pay monthly interest, sell their kidneys or set themselves on fire.

Three weeks ago, a brave woman made a speech at the mosque of Khorasgan in Isfahan which brought tears to the eyes of many farmers. She said, “Fathers have to wait until everyone is asleep before returning home since they are ashamed of looking their children in the eyes.” Referring to the regime’s officials, she asked, “Do they have a daughter at home who refuses to marry due to poverty? Have they experienced divorce due to unemployment?… Why don’t they answer our questions?”

The situation has always been like this for Iranian workers. They have been the first victims of Khomeini’s eight-year war with Iraq and the subsequent governments which took office with mottos of “construction” and “reform.” These were the ones to initiate temporary and so-called “white-signature” contracts for employment of workers.

Hand in hand with their “fundamentalist” rivals, the so-called “moderate” mullahs allowed contractor companies to dominate the country’s job market. The companies belonging to the IRGC and the so-called “reformist” factions have confiscated the lion’s share of workers’ wages.

Today, the minimum wage has been set at one-fourth of the absolute poverty line (1).  Rouhani’s cabinet has not stopped at this. It has also introduced a plan which allows employers to hire university graduates for only one-third of the minimum wage and without insurance coverage. According to the regime’s officials, this is part of the plans aimed at producing cheap labor force.

Such pressures and deprival are much worse for women workers as 70 per cent of workers who sign “white-signature” contracts are women. Young educated women with bachelors and master’s degrees have to work at jobs with monthly salaries of 150 to 300,000 toumans, a mere $46-92. They have to sign blank checks every month, promising not to file any complaints.

Indeed, why have the mullahs kept workers in constant want and fear? Why have they criminalized organized labor? Why did they abolish the relatively organized work force of the oil industry despite their brilliant record during the anti-monarchic revolution?

Part of the answer is that the mullahs have made Iran’s working class victim of their policy of plunder. Khamenei and the Revolutionary Guard Corps (IRGC) have dominated Iran’s economy and pocketed astronomical profits from worker’s blood and sweat.

The regime’s other motive in clamping down on the working class and disintegrating it is to prevent workers from playing their role in the protests for regime change. This is exactly why the realization of workers’ rights and the rights of all of Iran’s people to freedom, democracy and justice directly depends on the overthrow of the clerical regime.

Heroic workers,
The time has come for you to take a long stride forward by expanding your protest movement and concentrate on the main cause of workers’ misery and destitution. Contending to small concessions in the framework of the status-quo will not achieve anything for workers’ struggle. For every small step you take at high cost towards achieving your trade and economic rights, the clerical regime and their accomplice take ten new steps to deprive workers of their rights.

Promises made by the regime’s factions and tying hopes to illusive incidents will not relieve workers of poverty and job insecurity. None will improve the dismal life of their families or save child laborers.

We cannot sit idle and wait for suitable circumstances to happen on their own. Such circumstances must be created by the struggle and resistance of you, brave workers, for regime change.

In order to achieve freedom and emancipation, you have to rely on your own power. You have to get organized. The secret to prevail over the shameless onslaught of the clerical regime and its Guard Corps (IRGC) on your lives and rights is to associate your protests with the nationwide struggle for regime change.
So, you must get united with your fellow workers and set up centers of rebellion wherever you are. You must muster all your power to start the uprisings.

Today, all workers share common demands. They want revocation of all temporary and white-signature contracts. They want the contractor companies disbanded. They want reasonable pay raise to meet their needs, and they want to enjoy the right to form independent and free unions. Endeavoring to reach these demands is part of the struggle for the overthrow of the clerical regime.
Therefore, you should encourage workers of every production unit to rise in protest and stage strikes. You must expand your marches and demonstrations in all provinces.

Workers’ united struggle must be associated with the organized nationwide resistance, centers of rebellion and the army of freedom, and will succeed in solidarity with the protests of farmers and other deprived sectors.
Regime change and the overthrow of the worst enemy of Iranian workers, i.e. the clerical regime, is within reach.

The blest day of freedom and equality is on the horizon.
Hail to Iran’s workers

1- The minimum wage for the Iranian year 1397 (March 2018 – March 2019) is a little more than one million toumans which is approximately $200 a month. At the same time, Iranian economists have estimated that any family that earns less than 4 million toumans a month, is below the absolute poverty line, meaning that they are not able to provide their most basic needs.