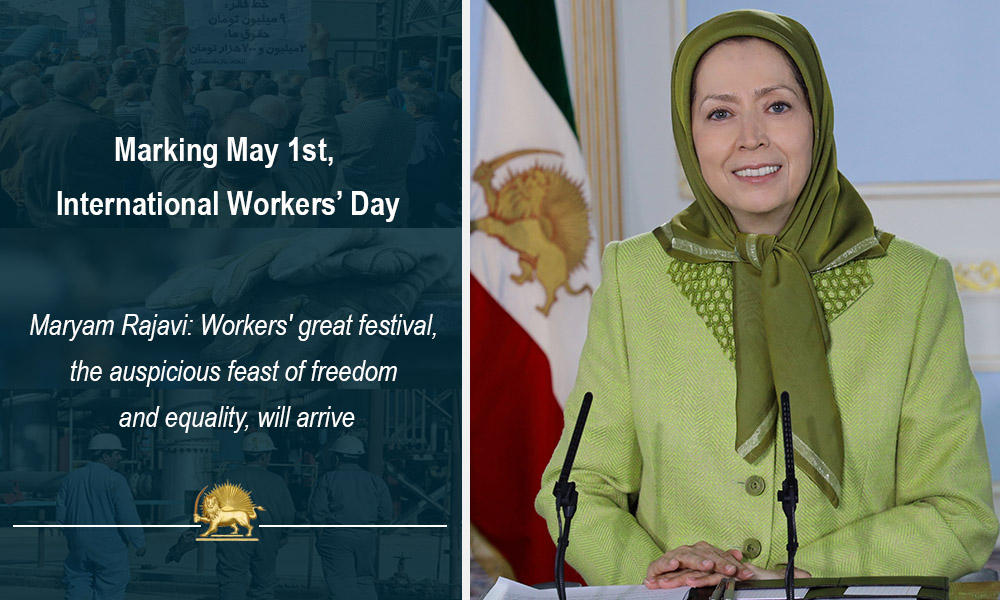 Fellow workers, sisters, and brothers,
Workers of industrial units, service sector, mines, farms, and rice plants, carpet weavers, fuel carriers, porters, peddlers, drivers, the millions in the army of the unemployed, and the society in general,
17 million working and retired workers who are impatient to overthrow the inhuman and anti-labor rule of religious fascism,
Although the Covid-19 disease has made life dark and bitter for workers, particularly under (the mullahs’ supreme leader, Ali) Khamenei’s inhuman policies and although the merciless monster of pillage and exploitation, embodied in the mullahs’ religious dictatorship, has driven the working class towards poverty and starvation,
May Day remains worthy of congratulations to all the working women and men throughout the country. This day heralds the end of exploitation and inequality.
Over the past year, Khamenei and Rouhani did everything to pave the way for the spread of the Coronavirus and the horrific rise in fatalities to block the uprising and protest movements. According to the regime’s official figures, which are far from the actual figure, by autumn 2020, six million people sustained adverse employment consequences, and 1.5 million people lost their jobs during the pandemic. Between autumn 2019 and autumn 2020, more than one million women lost their jobs.
Nevertheless, Iranian workers did not relent on their strikes and protests. They even took further unprecedented steps, including repeated and continued protests by municipality workers and the simultaneous strikes by mineworkers in three cities of Kerman Province against privatization and their job condition. They also included the nationwide protests by the retirees and pensioners, the 72-day strike by workers of the Haft-Tappeh Sugarcane Factory, and the unprecedented nationwide strikes in ten provinces by workers of the oil, gas and petrochemical industries who work on temporary contacts.

Valiant workers,
Khamenei called the Persian Year 1400 the year of “production, support, and removal of obstacles.” However, the long history and the experience pertinent to the regime’s policies have made it clear that Khamenei’s reference to “removal of obstacles” facilitates and expedites plundering Iranian society and accelerating vicious exploitation of workers by stripping them of their political, social, and human rights. In line with the “removal of obstacles,” referenced by Khamenei, workers’ minimum wage was set at just one-fourth of the living basket this year. So, workers need salaries four times greater to reach the poverty line.

As a result, Iranian workers have become the world’s cheapest workforce, cheapest not compared to western countries, but even Asian countries. For example, Iranian workers’ salaries are less than one-seventh of those of workers in Jordan and less than one-fifth of the wages of workers in Turkmenistan.
Even within Iran, this year’s salaries are lower than the past 30 years; for example, they are one-third of the 2016 and one-fifth of 2010 wages.
To “remove the obstacles,” Khamenei and his regime have time and again approved an increase in the prices of food items this year.

They have rendered social insurance hollow, privatized medical care, and charged premiums for health insurance. They even charge people for COVID-19 vaccines, which are free of charge all over the world. They have made people, and particularly workers, so miserable that many of them do not go to the doctor or hospital even when they are in great pain and suffering from illness. These policies are among the reasons for the increase in Coronavirus fatalities in Iran, the world’s highest rate per capita.
Khamenei has accumulated his one trillion-dollar wealth by way of such plunder. He has built his palaces, skyscrapers, and vast conglomerates and foundations on the workers’ suffering and blood.
For example, Ebrahim Arabzadeh lost his life last July due to sunstroke while working at a storage tank facility in the Port of Mahshahr. Workers like Omran Roshani Moghaddam, Hamidreza Behboudi, Massoud Eleksir, and Bahram Ebrahim in Hoveizeh, Roudbar, Haft-Tappeh, and Marvdasht committed suicide due to poverty and unemployment. All of them are victims of the insatiable greed of Khamenei and IRGC’s to accumulate wealth.

Fellow workers, sisters, and brothers,
The privatizing of Iran’s industry, mines, production plants, and service sector companies has failed miserably. In summer 2001, Khamenei issued a treacherous directive to boost the regime’s privatization efforts. The plan, leading to the breakdown and closure of many industrial units, is one of the main factors behind the stagnation of the country’s production and economy.
As usual, workers have been the prime victims of this policy. They have been either laid off or doubly pressured to compensate for the new owners’ embezzlement, destruction, and squandered bank loans by working and suffering more and enduring deprivation and non-payment of their wages.
The fate of factories such as HEPCO in Arak, Haft-Tappeh Sugarcane Factory, and Khuzestan’s Steel Factory demonstrated that handing over the national wealth to the regime’s cronies has no other meaning other than a dramatic drop in production, plunder of their properties, wealth, and land, and payment of the colossal bank loans received and wasted by the regime’s agents.

What do Iranian workers want?

Today, one of the central demands of Iranian workers holding protests in many production plants is revoking the privatization plan.
Another demand is to have their own independent and free labor organizations without interference and domination of the government-backed workers’ organizations affiliated with the Revolutionary Guards and the Intelligence Ministry.
Over the past four decades, the regime suppressed all efforts to form independent workers’ unions and organizations by adopting restrictive legislation, creating anti-labor, the so-called Islamic labor councils, arresting workers, and firing them.
Another fundamental demand of Iranian workers for which they are striving is to link their protests and struggles to the resistance movement and the Iranian people’s uprising to overthrow the regime. The mullahs’ agents try to warn them from making such a significant demand and move toward it. They warn the workers against politicizing their protests, confine their strikes to occupational demands, and refrain from joining riots and rioters!
Facing a storm of successive protests by Iran’s working class, the clerical regime tries to contain this unrelenting wave and render it apolitical, limited, and away from the demand to overthrow the regime.
To this end and since a long time ago, the Ministry of Intelligence and the Revolutionary Guard Corps have organized a group of Bassij and intelligence agents in universities under the name of “justice movement.” By staging anti-corruption gimmicks and slogans, this state-backed entity tries to steer Iranian workers’ explosive discontent toward lawful and controlled venues that pose no danger to the regime.

Ebrahim Raisi, the despised executioner, involved in the 1988 massacre of political prisoners, has become the leader of this so-called “justice movement.”
By utilizing treacherous elements, the Judiciary, and its sham trials of embezzlers, he portrays himself as an official who cares for the cries for justice by workers and oppressed slum dwellers. On the one hand, this ridiculous charlatanism seeks to prepare the political and social grounds for Raisi’s election as president, and on the other hand, acts as soft power to keep the working class away from rising up to overthrow the regime.

Confronting this anti-labor plan, Iran’s aware workers encourage their fellow workers to direct their anger and protest against the presence of Bassij mercenaries and lackeys of murderer Raisi in the workplace and distance themselves from them.
Moreover, these aware workers adopt tactics and methods during their strikes to lead the protests to the streets or hold sit-ins in public places to link their struggle to the nationwide protest movement.
Just like the workers who got killed or arrested during the uprisings in December 2017, January 2018, and November 2019, thousands of workers actively participate in the protests, form resistance units, or support their activities.

As demonstrated in the major uprisings in the past years, millions of Iranian workers, with their sons and daughters, lead the struggle against the ruling religious dictatorship and the mullahs’ anti-labor regime. They reject the regime’s deceptions and duplicity, including their anti-corruption and anti-embezzlement theatrics, as well as their sham presidential election.

During the continued trend of their large and small strikes, demonstrations, sit-ins, and acts of protest over the past year, Iranian workers have repeatedly insisted on these demands:
-Immediate release of workers detained and under torture in Khamenei’s jails;
-Unconditional return of expelled workers;
-Provision of job security for workers by changing their temporary contracts into permanent ones;
-Formation of free and independent workers’ organizations;
-The right to go on strike;
-Dissolving contractor companies and signing direct contracts with the government and the original employer;
-Revoking privatization of factories and companies;
-Forgiving debts of bankrupt factories and companies so that workers would not have to work more to pay for them;
-Free medical care;
-Unemployment insurance for all workers, with no discrimination, particularly for those who laid off during the Coronavirus crisis;
-Increasing workers’ salaries proportionate with the living basket, which is at least 120 million Rials.
These are the minimum essential and rightful demands of Iranian workers. Achieving these demands depends on the overthrow of the clerical regime in its entirety.

Iranian workers,
An enormous power lies in your struggle, especially when it expands and is linked to all your countrymen’s struggle. Your power can overthrow the mullahs’ religious fascism.
Workers’ united struggle is linked to organized resistance, the resistance units, and the Liberation Army. It will win victory in solidarity with the uprisings of Iran’s farmers and other deprived sectors.
By boycotting the regime’s sham presidential election, turn every factory, workshop, mine and office, and every workplace into a center of protest and perseverance to achieve your freedoms and trampled rights.

The overthrow of the clerical regime, this worst enemy of Iranian workers, is at hand.
The great victory of workers, freedom, and equality will arrive.