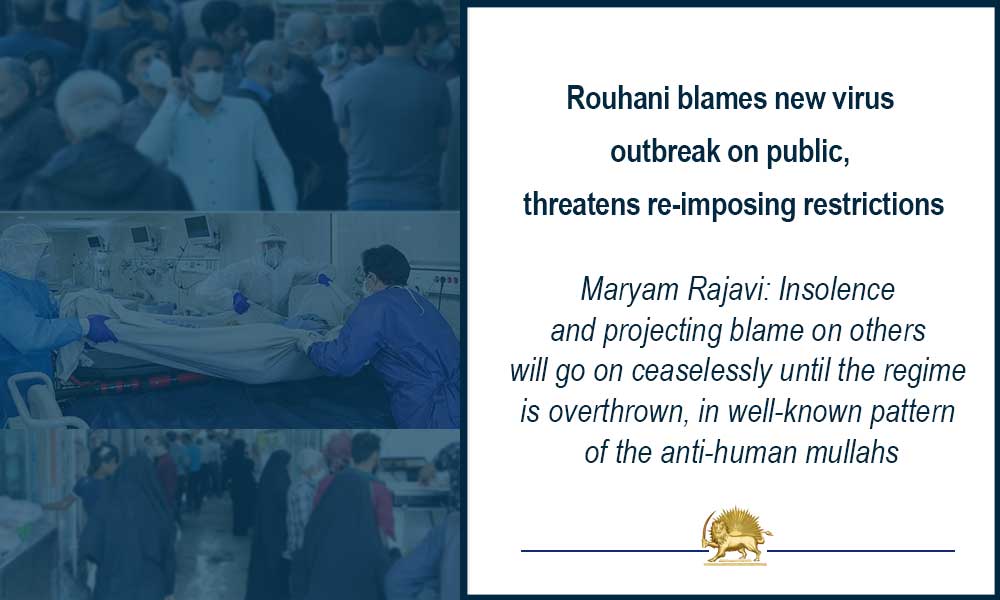 Maryam Rajavi: Insolence and projecting blame on others will go on ceaselessly until the regime is overthrown, in well-known pattern of the anti-human mullahs

Despite the terrible news of renewed Coronavirus outbreaks in different provinces, once again, Rouhani shamelessly projected blame on the public and threatened to re-impose restrictions. During a call with the regime’s Interior Ministry that was reported by the state media, Rouhani “received reports from several cities and provinces, where the spread of the virus has increased due to people’s disregard for health protocols.” He stressed: “If the people of these provinces and cities do not observe the health protocols, we will have to reinstate some of the limitations.” (The stat-run ISNA news agency, May 25)

In a call with the governor of Khuzestan, Rouhani whose remarks were published on his website, today, confirmed that while receiving a “full report of … the growing trend of the number of patients in this province due to the lack of full compliance with health protocols …the increasing number of patients may lead to the return of some restrictions to the province.”

With regards to Rouhani’s blaming of defenseless and helpless people for the spread of the virus, one must say that insolence and projecting blame on others will go on ceaselessly until the regime is overthrown and is a well-known pattern of the anti-human mullahs who are the main culprits for death and destruction in occupied Iran.